Did you know that there's only one Thanksgiving Day parade in the state of Arizona? It's the annual Fountain Hills Thanksgiving Day Parade in downtown Fountain Hills. In 2018, this parade with a small-town feel included sixty groups that drove, marched, waved, pulled floats and performed as they walked down the parade route. Adults will enjoy the throwback to days gone by and kids will love the impressive amount of candy that's thrown from the floats and vehicles as they pass by.

Read more about the parade experience below and be sure to watch the video of the full parade at the end of the article. The video shows all of the parade entries, but I've removed those periods where there's a gap in the parade or the parade is not moving, so you can see more parade in less time :)

Do you want a quick look at what the Thanksgiving Day Parade looks like? No problem! There's also a video at the end of the article that runs the entire parade in fast forward so that you can see the whole thing in about three and a half minutes!

Admission: Free! This is a public event.

Parking: Free! Parking is available in the store parking lots along the parade route.

What Will You See?

The annual Fountain Hills Thanksgiving Day Parade, also called Parada de Los Cerros (Parade of the Hills) has almost everything that you'd expect to see as you watch the go by. There are a number of floats, but nothing literally floating overhead like you'd see in the Macy's parade in New York City.

Here's the order of the groups that appeared in the 2018 parade:

Each of the groups in the parade display their number as they go by so keep the list above handy as you watch the video below! 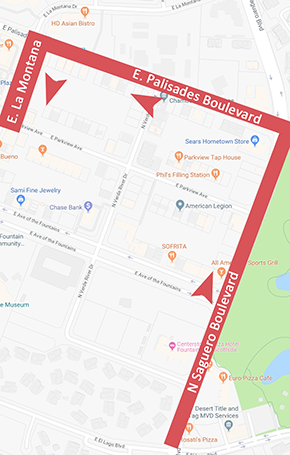 If you're watching the Fountain Hills Thanksgiving Day Parade from a spot towards the end of the route then the parade won't start until something like 9:20 or 9:30. So, if you arrive after 9AM then head to the end of the parade route.

Speaking of getting to the parade on time, be sure to give yourself plenty of time to navigate around the roads in the immediate area that will be closed for the event. If you're not from the area or have never attended the event before then give yourself even more time. This was my first time at the parade and I've not spent much time in Fountain Hills, so it took me a few tries to get to the parade route.

You might be planning get there really early before the roads are closed. I'm not sure when they actually close the roads, but keep in mind that the annual Turkey Trot 5K and 1 mile runs start at sunrise that morning.

I watched the parade on Palisades Boulevard just before the route turns onto La Montana Boulevard. I arrived at my viewing spot at 8AM and as you can see in the image below, the area was pretty quiet at that time. If you plan to watch the parade from this area (or anywhere on Palisades), I recommend getting to your spot by 8:45 AM or so. That's when the street started to really fill up with people. The Color Guard leading the parade reached my location at 9:18 AM. 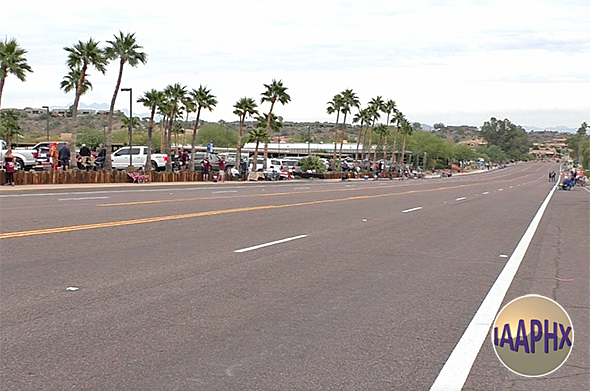 What should you bring to the parade? This is Arizona, so of course you should bring some water. The parade lasts about an hour, so unless you're planning to stand or sit on the curb, you might should consider bringing a collapsible chair. And if you have kids in tow, be sure to bring a bag for the candy (more about that later).

You might also want to bring some food with you to enjoy at your viewing spot. And of course, you could go big and tailgate at the parade. There are some parking lots along the route where you can back into a parking spot with a good view and let the festivities begin! Just be sure to get there really early and claim your front row parking spot. 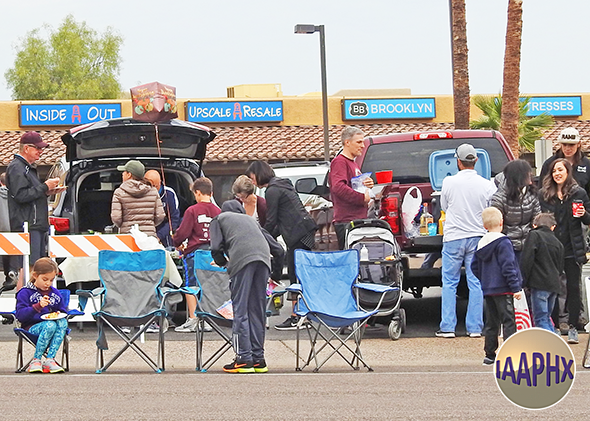 I didn't take a picture of the announcer stand, but I was able to pull this screen capture from the parade videos: 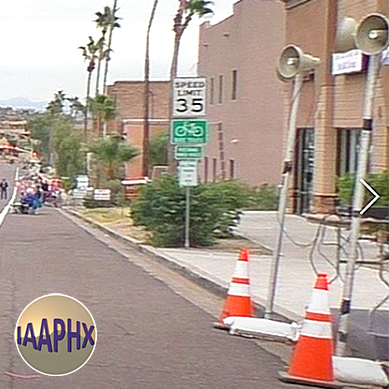 The other nice thing about the announcer stand is that some of the parade groups will stop there while the announcer reads off their prepared script. A lot of the politicians stopped because... well, they're politicians. But some of the groups will stop there and give a performance. For example, the Fountain Hills Martial Arts group stopped and gave a performance.

As described in the previous section, each group in the parade displays a number that's listed in the parade brochure so you can look up their name. This way, you won't be in the dark about what's passing in front of you. The announcements offer additional information if you find that kind of thing interesting like me.

Regardless of where you sit, there is something for everyone here. There were two things that seemed to be in abundance in the Thanksgiving Day Parade. The first thing was cars. There were lots and lots of old and new cars, trucks and motorcycles in the parade.

At a car show, you look at the cars sitting in place. They might as well be models of real cars. But at a parade, you can see, hear and yes even smell them driving down the street. Be warned, if a bunch of cars that were built many decades ago are not moving near you for more than a few seconds, you will notice how far we've come with emissions! 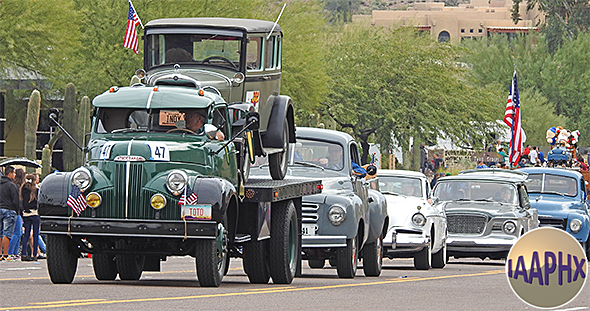 The other thing that was in abundance was the candy! Many of the groups in the Thanksgiving Parade were throwing candy from floats or cars and there were also people in the parade walking along the sides of the road handing out candy to the kids. The kids were really excited to have candy thrown at them and when they saw candy on an incoming trajectory towards them, they would shriek and scramble to pick-up all of the delicious candy laying on the ground. 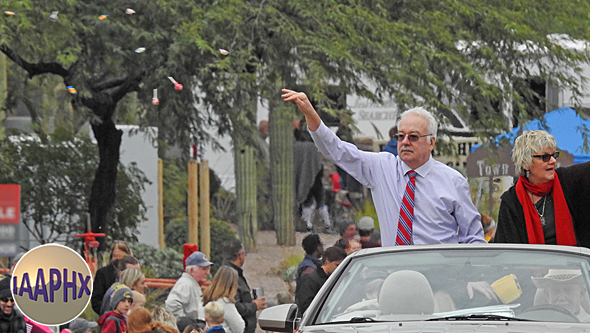 There was A LOT of candy being thrown or handed out. I was watching from a spot along the second half of the parade route and only two or three people walking with empty candy buckets. If you're bringing kids to the parade, be sure to have a bag for all of the candy that they will collect. It turns out that there are things that children are thankful for on Thanksgiving :) 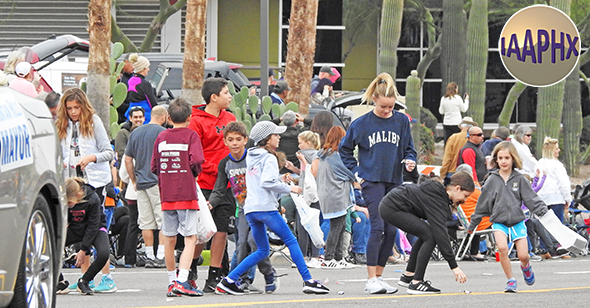 Fun fact: The parade registration form notes that you can't throw items from moving entries and nobody really cares! :) 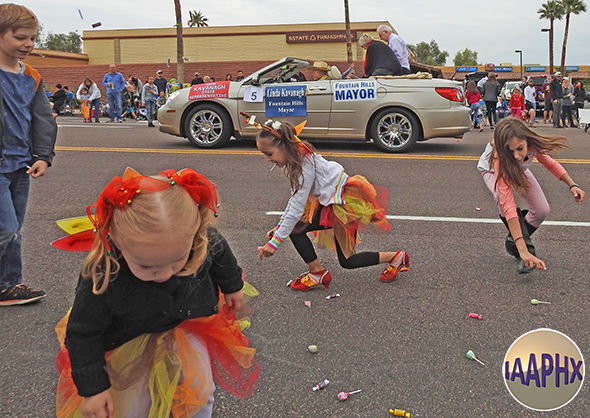 One of the things that I really enjoyed were the horses in the parade. There were three or four wagons being pulled by horses, from a small wagon pulled by ponies to a large carriage pulled by four horses. Just a little of the old west here in Arizona. 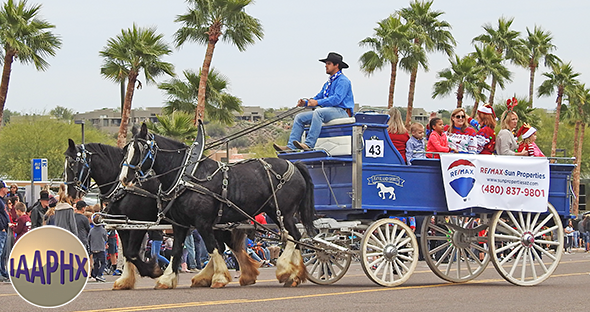 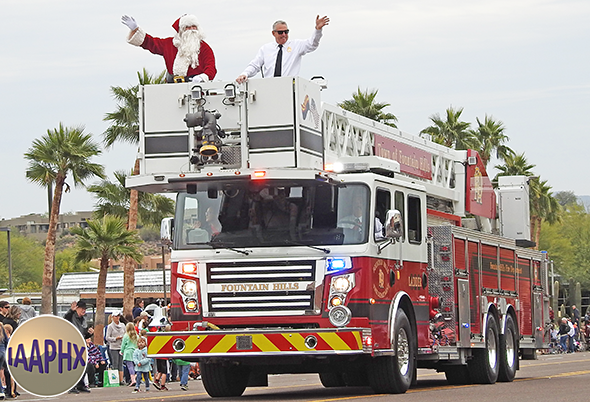 In addition to pleasing the crowds, parade groups are being judged as they roll by. They winners were not announced along the parade route as far as I know, but here are the results that were posted in an article in the Fountain Hills Times 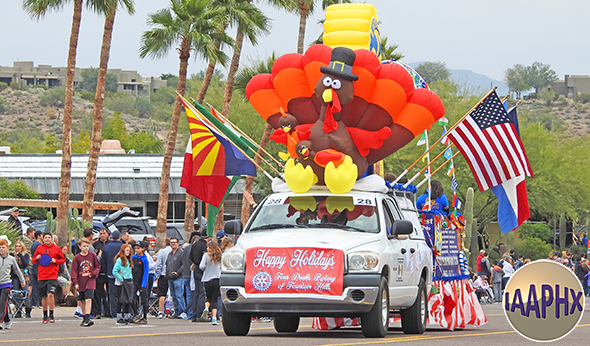 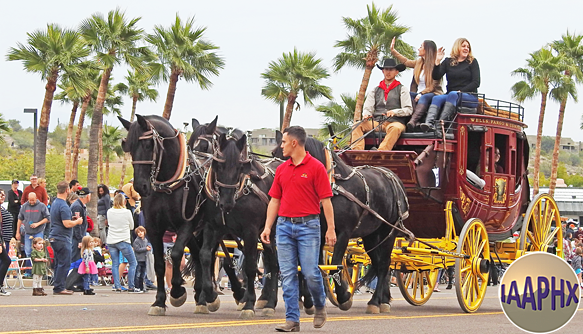 Check out the video below that shows every float, vehicle and group that was in this year's Fountain Hills Thanksgiving Day Parade. What you won't see are those periods of time when the parade is stopped or when there are gaps in the parade line and nothing is going by. They have been removed so you can see more parade in less time :) So make some popcorn, get comfy and enjoy a good old fashioned home town Thanksgiving Day Parade with the occasional southwest flair! 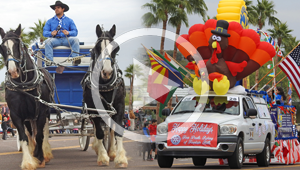 Do you need your parade experience delivered in the shortest possible time? IAAPHX has you covered! The video below shows the full parade in a time warp, allowing the entire parade to pass by in three and a half minutes! It's like speed reading for parades! Get ready... get set... PARADE! 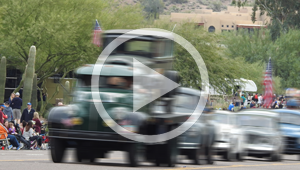 (In and Around Phoenix) IAAPHX is not affiliated with the Fountain Hills Chamber of Commerce, the city of Fountain Hills or any of the groups in the parade. This article and the videos are IAAPHX productions. All rights reserved. This material may not be published, broadcast, rewritten or redistributed in whole or in part without the expressed written authorization from IAAPHX.