Each year from mid-November to early January, Disney transforms the "It's a Small World" attraction at Disneyland, CA. into a holiday wonderland of sights and sounds. The exterior is covered with 300,000 colorful lights and every half hour or so a holiday show is projected onto the attraction. Watch the video below to see "It's a Small World" transformed from a mild mannered daytime building into a spectacular nighttime display of lights and song.

This video was shot during the 2014 Christmas season. If you look closely at the smiling clock face in the super zoomed-in scene, you might notice that the exterior of the "Small World" attraction was in need of some repair that year. But don't worry, the maintenance was completed in the spring of 2015 and the clock face looks great today! I can't be sure, but I think the clock face has an even bigger smile now! 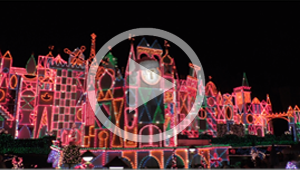 IAAPHX is not affiliated with the Walt Disney Company. This article and the video are IAAPHX productions. All rights reserved. This material may not be published, broadcast, rewritten or redistributed in whole or in part without the expressed written authorization from IAAPHX.