Fourteen wheels. 133 feet long. 1.2 million pounds. 25,000 gallon water capacity. 7,000 horsepower. Those enormous numbers describe the Union Pacific Big Boy steam locomotive with its tender attached. Built in the early 1940s and long since retired, these trains are now sitting stationary in museums and parks across the US. Can you imagine what it must have been like to see one of these fire breathing monsters in action out on the open rails? Oh, wait - I did! And you can too by watching my video below! But I'm getting ahead of myself...

Note that clicking on most of the pictures below will bring up a bigger and more clear picture. 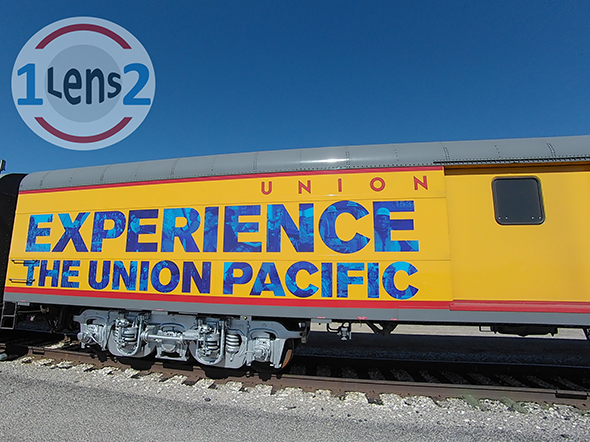 Twenty-five Big Boy steam locomotives were built for UP between 1941 and 1944. They were designed to haul freight up grades steeper than what other trains at the time could handle. The Big Boys were an amazing feat of mechanical ingenuity for their time and they remain so to this day. These things were so big that their frames had to be hinged so that they could go around curves in the track. And did I mention that they weigh 1.2 million pounds each? After they were all retired by 1961, you could only see static displays of these trains at museums. Seeing one of these behemoths on stationary display is impressive with its giant cast iron components and intricate parts designed to move together in complete synchronicity. 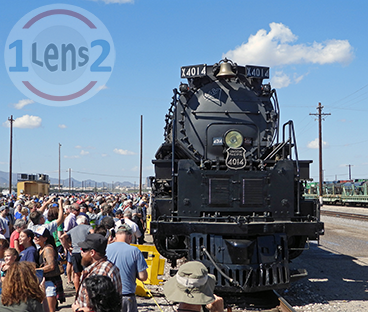 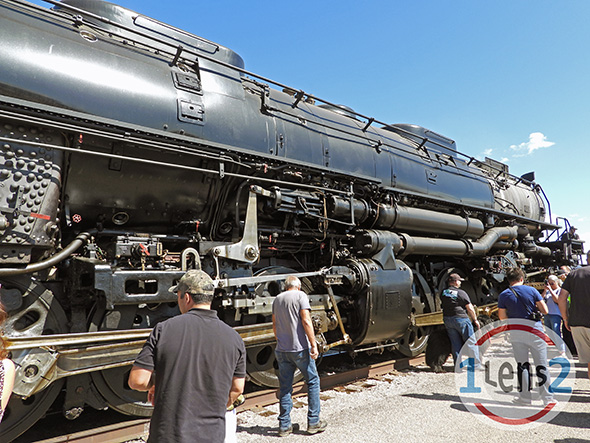 After it's restoration, Union Pacific sent the Big Boy out on an Excursion Tour that included a few cities in Arizona. I don't know about you, but when the biggest operating steam engine in the world rolls through your state, I take a day off from work and go see it. So, on October 18, 2019, I drove down to the Union Pacific Rail Yard in Tucson, AZ to see Big Boy No. 4014. On the Excursion Tour, #4014 stopped at the Tucson Yard and then travelled east. I was able to take pictures and record video of the train in Tucson, Vail and Benson.

Big Boy No. 4014 is a full scale Rockstar in the train world as evidenced by the huge crowds of people that gathered seemingly everywhere along the Bog Boy's route across the USA. Even in places where UP's 4014 rolled through at speed without stopping, crowds gathered an hour or more beforehand just to see it for a few seconds. Everybody wanted to see and experience this massive symbol of cutting edge mid-twentieth century mechanical technology. The crowds included men and women of all ages and people of all ages from toddlers to senior citizens. 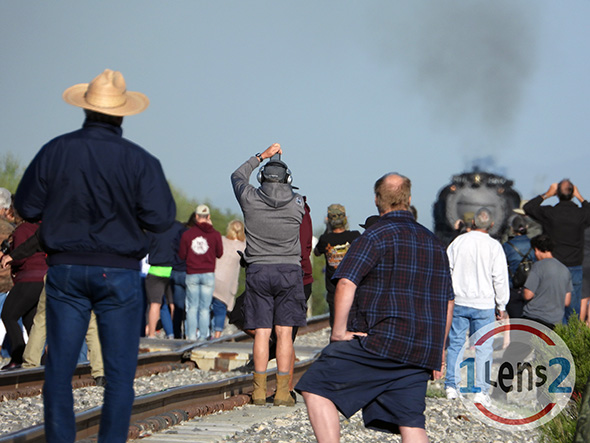 The local police and Union Pacific security were at the designated stopping locations for traffic and crowd control. People were trying to get as close to the train as possible so they could they snap pictures, recorded video and, of course, take selfies with this historical celebrity visiting their town. Who knew there was so many rail fans in and around the Tucson metro area?

I had seen pictures and videos of engine #4014, but there is nothing like seeing it in person. While it was sitting on the track in Tucson, I was taken aback by the sheer size of this thing. At 133 feet long and 17 feet tall, this thing is MASSIVE! If I were a few generations younger then I would say, "OMG"!

Standing up close to it, you can see what appears to be an infinite number of bars and pistons and valves and fittings and gears and pipes and couplings and chains and strange things that are all interconnected to make the locomotive move. 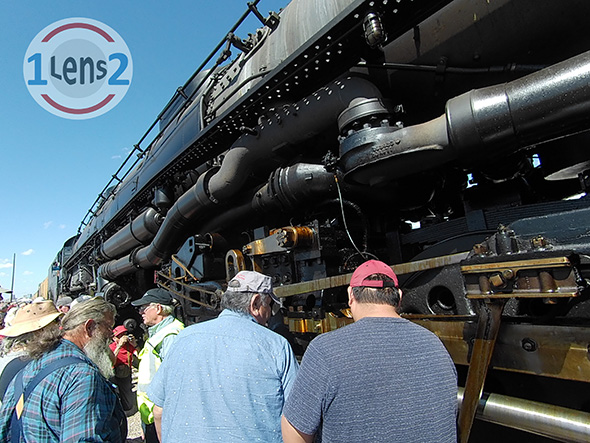 And speaking of valves, from where I was standing and with the help of my Nikon P1000 ultra zoom camera, I counted 14 valves inside the cab that the engineer apparently uses to "drive" the train. And those were just the valves that I could see from that vantage point. 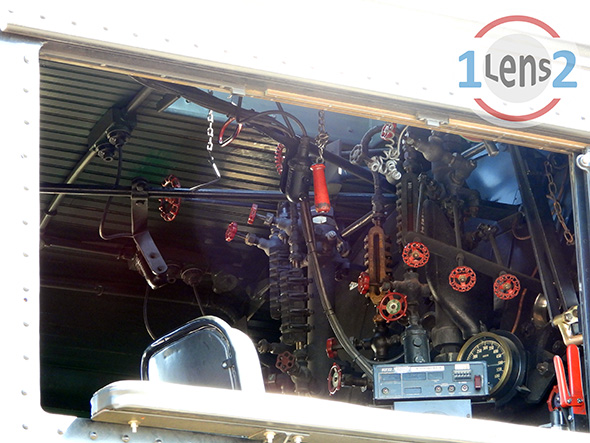 Seeing the UP Big Boy while it's sitting on the tracks is impressive. But watching it roar by you at speed is truly stunning. I'm talking goose bumps for anyone who is thinking about the mechanical complexity of what is happening to move this 1.2 million pound pile of metal and water. The entire lower half of the train is a flurry of perfectly synchronized moving parts. What's more amazing is that some of those moving parts would likely take half a dozen people to lift. 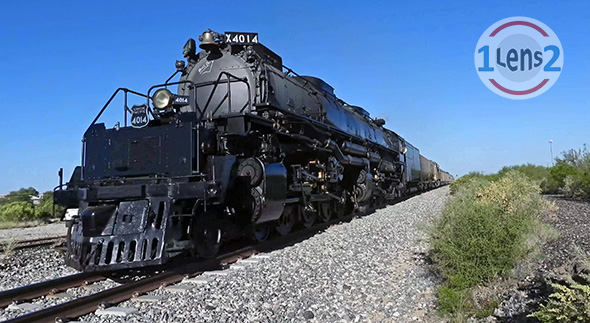 Something that surprised me was that even standing 20 feet away from the track, I could feel the heat coming off the locomotive. I'm not talking about a plume of steam coming off the train, I mean the heat radiating from the metal boiler (I think that's what it's called) that holds the water. One of the guys on the train said that the boiler runs so hot that it won't hold any kind of paint. That's why the front part of the train isn't dark black like the rest of the locomotive.

After No. 4014 had roared past me and was out of sight, I found myself imagining a large room in 1940 with rows of drafting tables that must have been manned for months at the American Locomotive Company as this massive steam engine was designed and they carefully worked out how to make all of those parts work together. 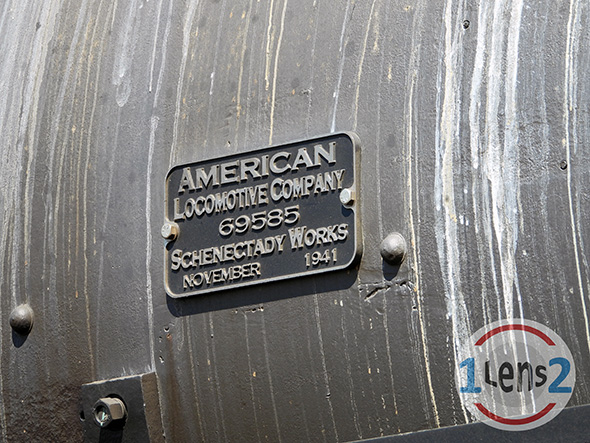 According to its very own Wikipedia page, the Big Boy steam train was originally designed to travel at a mind-boggling 80 MPH, although, the poster that UP displayed at the Tucson Rail Yard said that #4014 has a maximum speed of 65 MPH. In any case, that's pretty fast for a piston driven steam train. In my video below, you can see the train traveling at what I would guess is about 45 MPH. 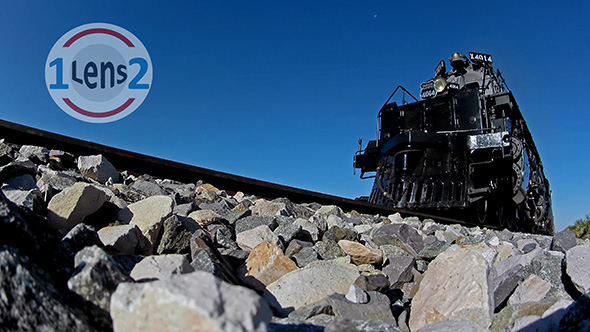 A view of UP's Big Boy locomotive from track level.

If you want to see #4014 running faster, you can also watch this YouTube video (the link skips to the perfect spot in the video). Note that in that video, Big Boy is the engine in the front.

I felt a real sense of history when I saw this steam train roll up to the designated stopping point in Benson, AZ just like it would have pulled up to a train station or rail yard back in the day. This machine is from a time long gone. Imagine someone in the mid-1940s seeing this fire-breathing beast pull up to the station or seeing all 1.2 million pounds of a Big Boy locomotive fly through a railroad crossing at 65 MPH. 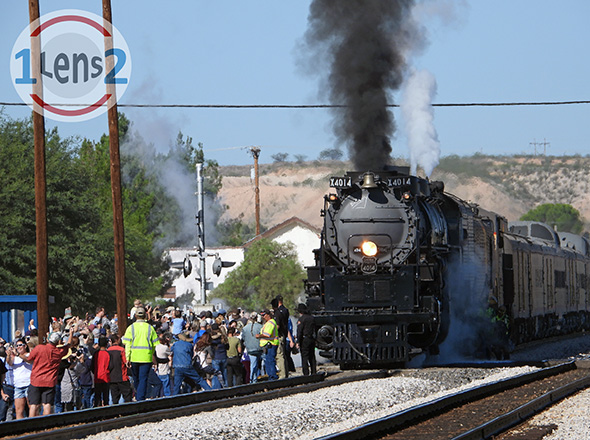 To see more Big Boy specifications and a size comparison, check out the Big Boy page on the Union Pacific website.

Here's the video that I recorded that shows Union Pacific's Big Boy No. 4014 on its Excursion Tour on Friday, October 18, 2019. I took some close-up shots while Big Boy was stopped at the Tucson Rail Yard and then some shots of #4014 as it travelled through Benson, AZ and Vail AZ. In the video, you can hear Big Boy's three chime Hancock steam whistle which is one of my favorite things about this train. When you hear that whistle, you know something BIG is coming! 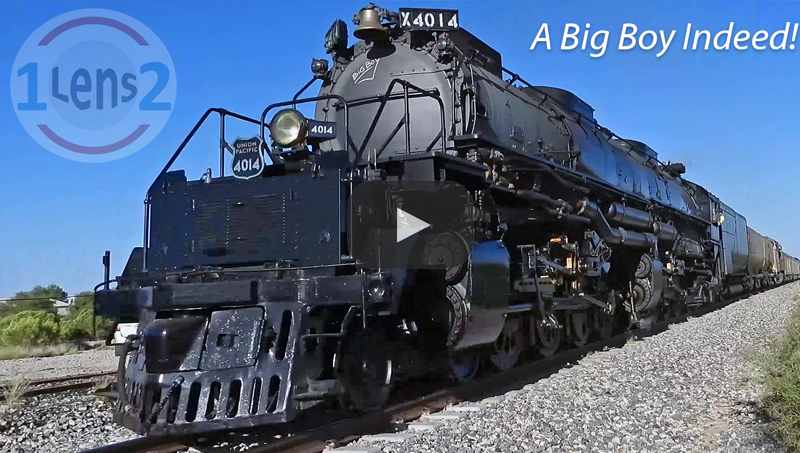 Click to Watch the Video on YouTube
This article, the pictures and the video are Copyright One Lens Two. All rights reserved. These materials may not be published, broadcast, rewritten or redistributed in whole or in part without the expressed written authorization from One Lens Two.