British Airways 747 in the Skies Over Phoenix

Up until recently, if you were in the Phoenix area at around 5PM or so, you could look up into the sky and see a giant aircraft descending on its way to Phoenix Sky Harbor Airport. That was when British Airways flight 289 with nonstop service from London Heathrow Airport arrived in Phoenix with a scheduled arrival time of about 5:45 PM.

The giant aircraft that you would see in the sky was the legendary Boeing 747. During the busy months of the year, British Airways flew a second 747 on some days from London to Phoenix so you had two opportunities to see a 747 over the skies of Phoenix. These two 747s were the biggest aircraft to regularly land at Phoenix Sky Harbor Airport. 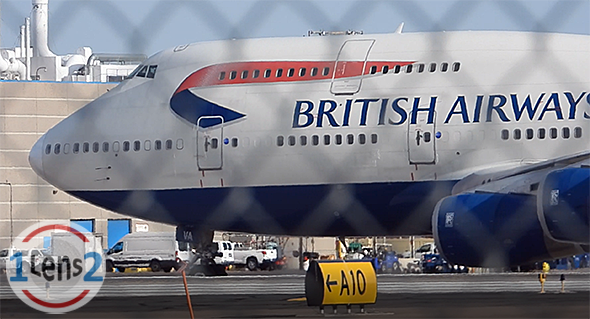 But sadly for Phoenix area plane spotters, on October 27, 2019, British Airways swapped out the 747 for the newer and more efficient Boeing 787 Dreamliner. The 787 is an amazing aircraft, but a 747 aircraft is... well HUGE and unique and it was exciting to watch it descend across the Phoenix East Valley and land at Sky Harbor. And I wasn't the only one who liked to watch these 747s. If you stopped in at the airport's viewing area on the south end of 40th Street on just about any day of the year at around 5:30 PM, you would likely find people waiting for British Airways flight 289 (BA289) to land.

Luckily, I choose the summer of 2019 to get out to various spots in the Phoenix area and record some video of the British Airways 747-400 flight to Sky Harbor. You can check out the videos at the end of this article. I couldn't tell from the news reports about the aircraft swap if the 747s will ever be back, so this video might reflect on the end of an era. But if British airways does bring the 747 back Phoenix then you can use this article and the videos to plan your outing to watch this massive aircraft once again rule the skies over Phoenix. I know I'd be back out there getting some more pictures and video!

There were two common flight paths for flight 289 when British Airways was flying a Boeing 747. The first flight path came in from the northeast over Mesa and then turned to the west to line up with runway 26 Right at Sky Harbor Airport.

BA289 Flight Path #1 from the northeast.

The second flight path was much more interesting if you're plane spotting. It came in from the northwest and made a tight U-turn over Mesa to get on a heading that would line it up with runway 29R at Sky Harbor.

BA289 Flight Path #2 from the northwest.

So, if you were in the right place at the right time then you could watch the 747 make a giant 180 degree turn banking quite noticeably to the right directly over your head. And if you had a pair of binoculars or a camera with a good zoom then it was particularly amazing to watch! For my videos below, I used my Nikon P1000 ultrazoom camera which has a 35mm equivalent 3,000mm telephoto lens (125x).

The best place that I found to watch this half a mile-high U-turn is Quail Run Park in Mesa. It's a large public park with some wide-open spaces where you can get a good view of the 747 as it flies overhead. You can find the Quail Run Park using this link to Google Maps and then drive over there to watch any planes that use this flight pattern or the British Airways 747 if they ever bring it back for their flights to Phoenix.

When I went, I would watch the 747s from the parking lot which was usually empty on week days at the time of this flight. If the parking lot is busy when you go there then you might want to walk across entrance road to open field to the north of the parking lot.

Like any other flight, BA289 would not always be flying over Quail Run Park at the same exact time every day. If you go out to watch planes, be sure to monitor the flight's status using an application of website like FlightRadar24.

The Descent Into Phoenix

The picture below shows British Airways flight 289 heading east just before entering the big U-turn over Quail Run Park in Mesa. According to flightradar24.com, it was flying at about 6,000 feet and traveling at around 220 knots (253 miles an hour).

Here's a screen capture from my video below showing the 747 southbound and banking quite a bit to the right in the overhead U-turn. It really was cool to see such a large airplane perform this maneuver at such a relatively low altitude. 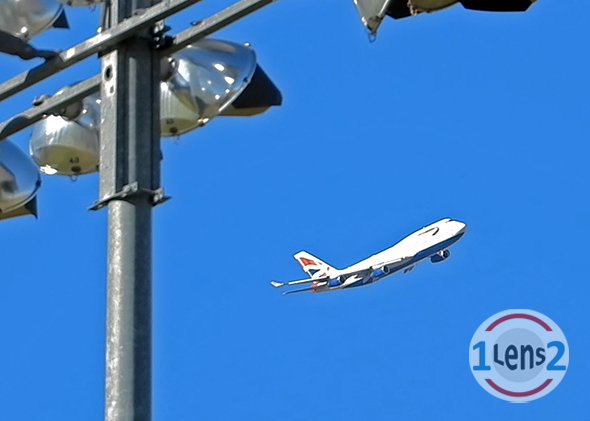 The Boeing 747 banking to the right in the U-turn.

After flying a half circle over Quail Run Park, the Boeing 747-400 came out of the U-turn heading west at an altitude of about 5,200 feet and flying at about 200 knots (230 mph). This aligned it with runway 29R at Phoenix Sky Harbor Airport. 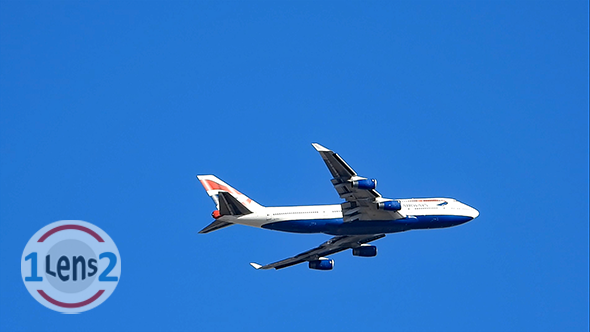 Flight 289 coming out of the U-turn over Mesa.

Now is a good time to mention that I made a few trips in the Phoenix area to watch Flight 289 descend and land at Sky Harbor Airport. That would explain how I next captured the British Airways 747 flying over a parking lot near Priest Drive and Washington Street in Tempe, AZ. 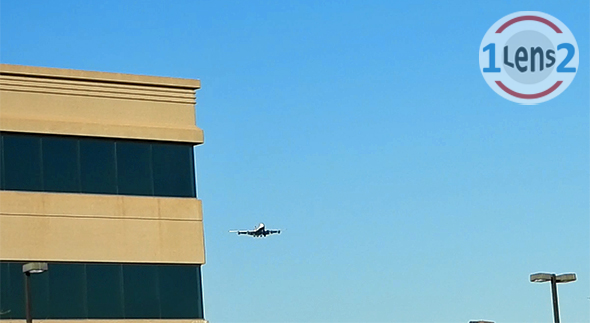 At this point in its flight path, BA289 was approximately 2,300 feet overhead, traveling at about 150 knots (173 mph). By the way, this aircraft is almost a half mile in the air and it still looks ENORMOUS as it goes by! 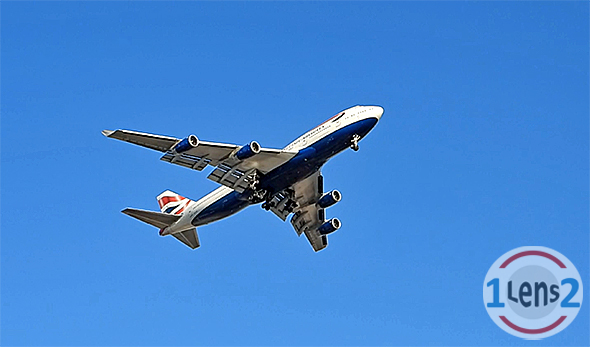 The Priest and Washington plane spotting location in Tempe.

This location is a great place to watch any planes on approach to Sky Harbor. It is a parking lot for an office building, but I've never had any issues while I was there. If you stop in here to watch planes and someone from the building lets you know that they prefer that people not stop to watch the planes then drop me a note by clicking the envelop icon at the very bottom of this article and let me know. I'll update this article letting people know.
ADVERTISEMENT

As good a location that Priest and Washington is for watching large aircraft fly over, the holy grail of 747 flyover locations in my humble opinion is at the end of North 56th Street in Tempe. The 747 is soooo big and soooo low that it doesn't fit in the picture below that I took with the camera fully zoomed out! If this picture piques your interest then you'll want to watch the main video below where you can see this magnificent aircraft fly over as well as hear it! At this point the 747 is flying at an altitude of "ridiculously low" at a speed of "who cares this is amazing" :) 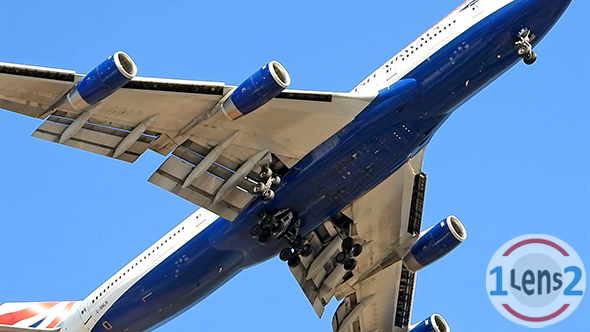 From this point, it's a mere one and three quarter miles to the end of Runway 29 Right at Phoenix Sky Harbor, so the 747 pilot simply needs to point the airplane at the blinking lights at the end of the runway and land the plane :) 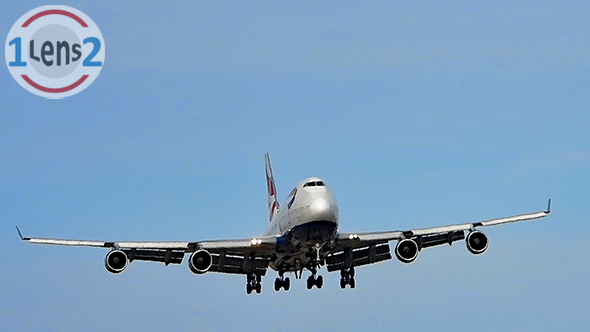 For a good view of the landing, I headed over to the airport viewing area that sits conveniently on the north side of Runway 29R on the south end of 40th Street. The viewing area is close to the end of the runway where a lot of aircraft usually land at this time of day (which I suppose would make it the start of the runway). So, you would get a pretty good view of the 747 on final approach and landing from this location.

The 747 took a good portion of the runway to come to a stop so it also took a while for the pilots to taxi the aircraft to the British Airways gate which is all the way back at the other end of the runway. When the plane was close to the gate area, it had to make another U-turn, this time while on the ground. This second U-turn was just as cool to see as the first one because you got a great view of the curves and lines along the body of the aircraft as the plane spins in place 180 degrees. I think this is one of the most interesting parts of the video in the next section.

BA289's second U-turn of the day in Phoenix.

I think the big question is whether or not British Airways will fly the Boeing 747 on any future flights into Phoenix or if the change to the Boeing 787 Dreamliner is absolute. If they don't then I'm glad I was able to record video of a 747 in the skies over Phoenix before they disappeared. And my video below will be a kind of historical record of the days when 747s roamed the skies here.

But I'm really hoping that they add a 747 back into rotation now and again. According to Wikipedia, the typical passenger capacity of the 787 is 242 people. As far as I can tell, British Airways mostly flies Boeing 474-400s which Wikipedia.com says have a typical passenger capacity of 416. That's a big difference so I'm hoping that we'll see some 747s during the busy travel season between London Heathrow and Phoenix Sky Harbor airports. If 747s once again grace the skies over Phoenix then you can use the locations that I mention in this article to enjoy the sights and sounds of this massive majestic plane. I know I will!

Click on the image below to view the video I captured of the British Airways 747 as it descends into the Phoenix area, lands at Phoenix Sky Harbor Airport and then taxied to the gate. The video starts with the 747 at an altitude of about 6,000 feet and tracks it at various points down to the gate at the Terminal 4. Some of the scenes in the video are quite close-up because I used the Nikon P1000 ultrazoom camera which has the equivalent of a 3,000mm zoom lens (125x magnification). I also show you some good plane spotting locations that you can use if British Airways resumes use of the 747 on flight 289 or for viewing any aircraft that uses a similar flight path into Sky Harbor. 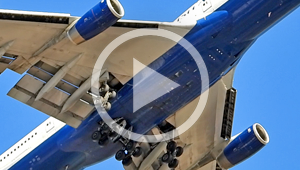 But wait, there's more! :) Here's a bonus video only available to visitors to the One Lens Two website! This video shows another British Airways 474-400 landing at Phoenix Sky Harbor airport, but this aircraft has a different paint scheme/design than what you see in the main video. And who doesn't want to see another massive 747 landing? 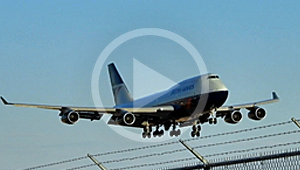 Click to Watch the Bonus Video
One Lens Two is not affiliated with British Airways, the Boeing Company or Sky Harbor Airport. This article and the videos are Copyright 2019 One Lens Two. All rights reserved. These materials may not be published, broadcast, rewritten or redistributed in whole or in part without the expressed written authorization from One Lens Two.