The maximum optical zoom of the Nikon COOLPIX P1000 is the 35mm equivalent of a 3000mm focal length. At that focal length, you can see the peaks and valleys of craters on the moon and the rings of Saturn. Compared to the P1000's most wide angle focal length of 24mm, 3000mm is a magnification of 125Xs. I've written a lot of articles on this website that show how far the Nikon P1000 can reach and how amazing that reach is. But the P1000 can reach even further with its digital zoom. That extends the camera's maximum zoom to the equivalent of a 12000mm focal length. That's not a typo! Twelve THOUSAND millimeters! That's a magnification of 500Xs compared to a 24mm lens!

The question, of course, is what does an image at this level of digital zoom look like? I'll share my experience with the P1000's digital zoom in this article and show some pictures. You can also watch a video of my digital zooming photoshoot at the end of the article.

Digital zooming on the other hand isn't technically zooming at all. The image coming into the camera is not changing. Rather, the camera is digitally enlarging the existing image and cropping the sides to make it appear that the camera is zooming. A very clever trick indeed!

You can click on most of the pictures below to see a larger view. Although the bigger view will only be noticeable if you're reading this article on a device with a large screen, like a tablet, computer or a TV. Probably not so much on your phone.

Optical zooming shows additional information about the scene. As the scene changes, you can literally see more detail as you zoom in. But digital zooming doesn't introduce any additional detail. It just makes the existing details look bigger. Digitally enlarging a small area with no detail results in a large area with no detail. And that tends to make the image look blocky and blurry which looks bad.

For example, below is an image of some buildings taken at the 35mm equivalent of a 100mm focal length: 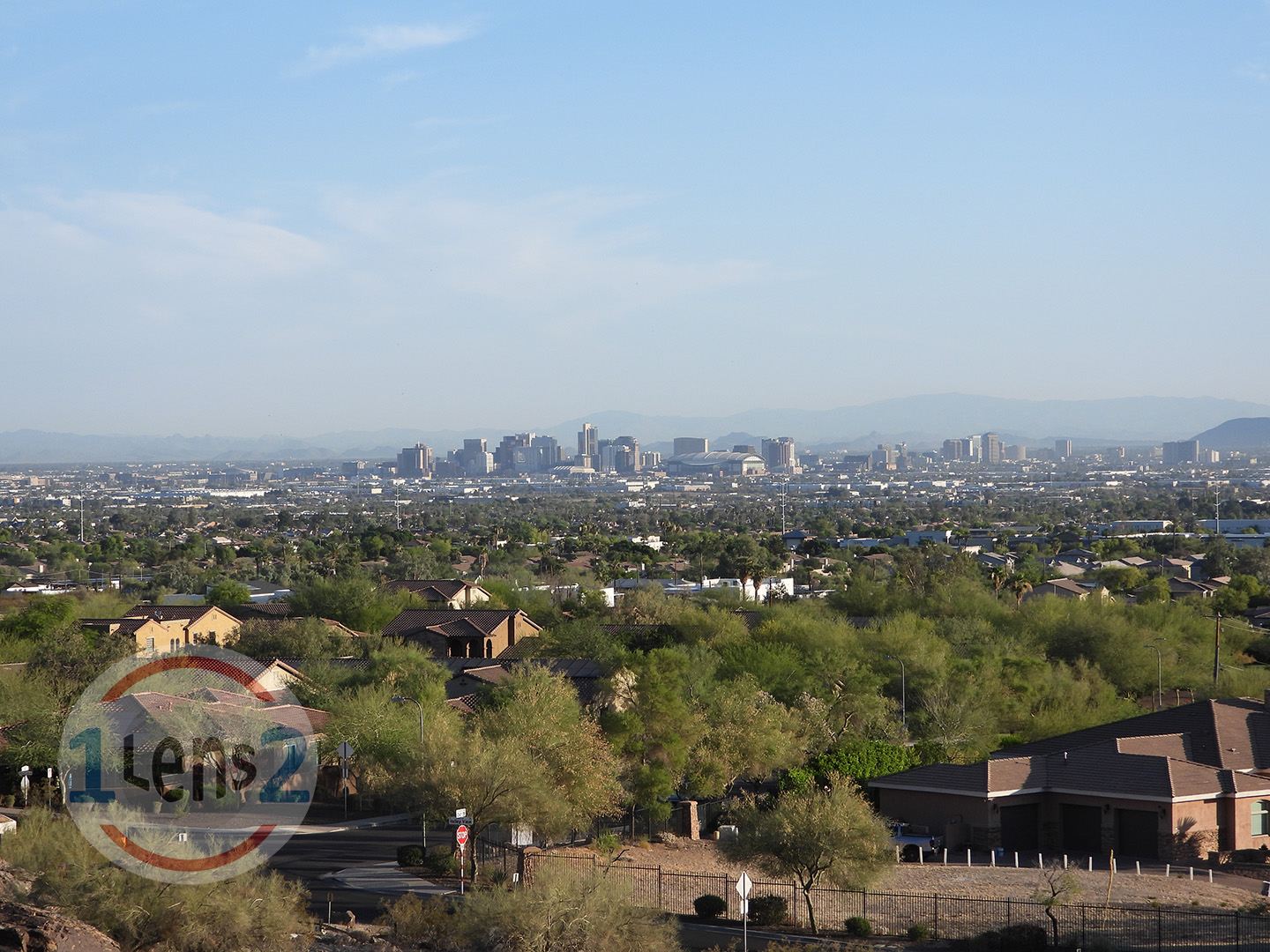 And below is an image of the same scene taken at a focal length of 2000mm: 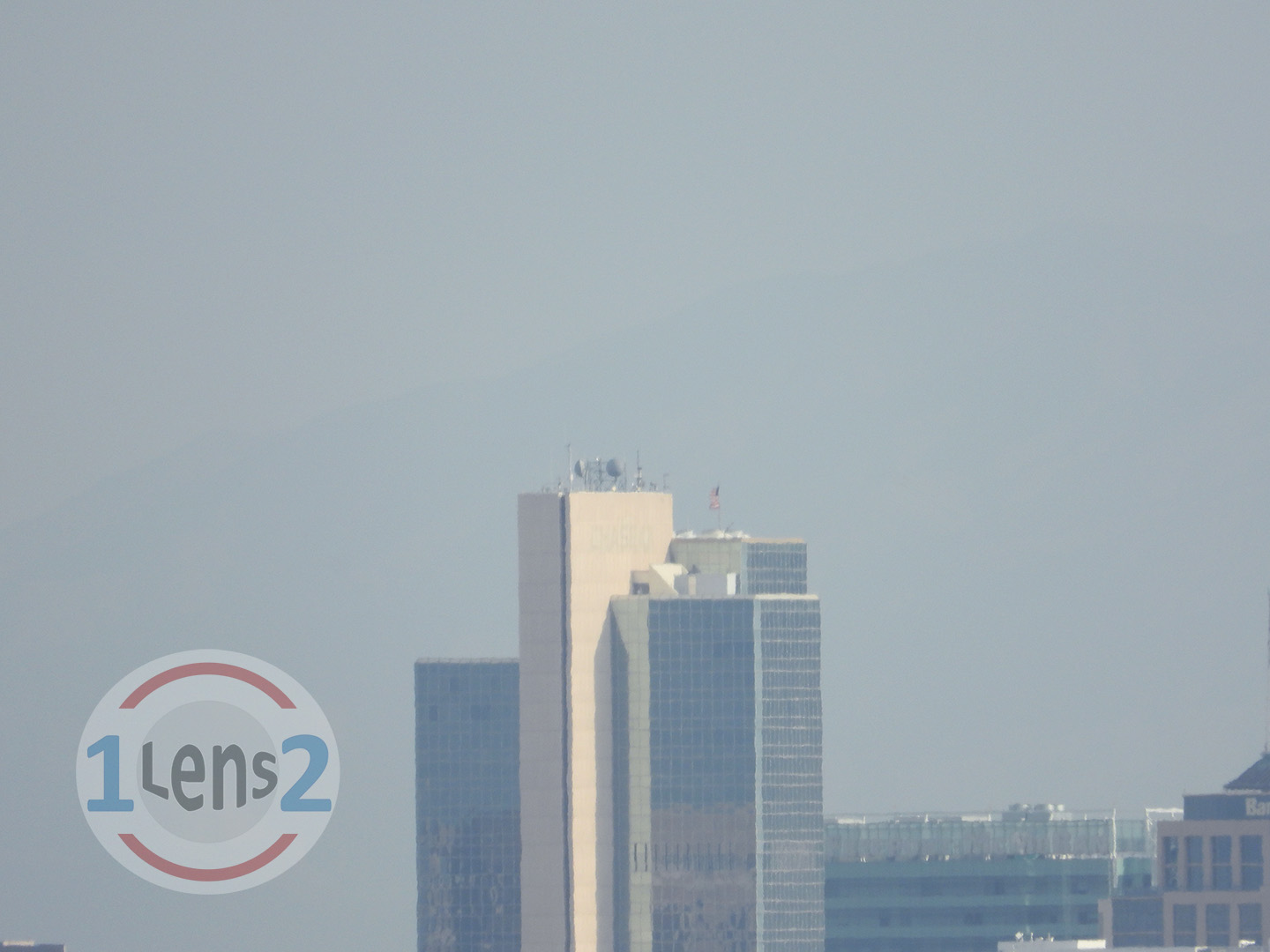 Both of these pictures are optical zooms and they both look clear and detailed. But look at what happens when we digitally "zoom" in to the 100mm picture so that the building is the same size as it is in the 2000mm picture: 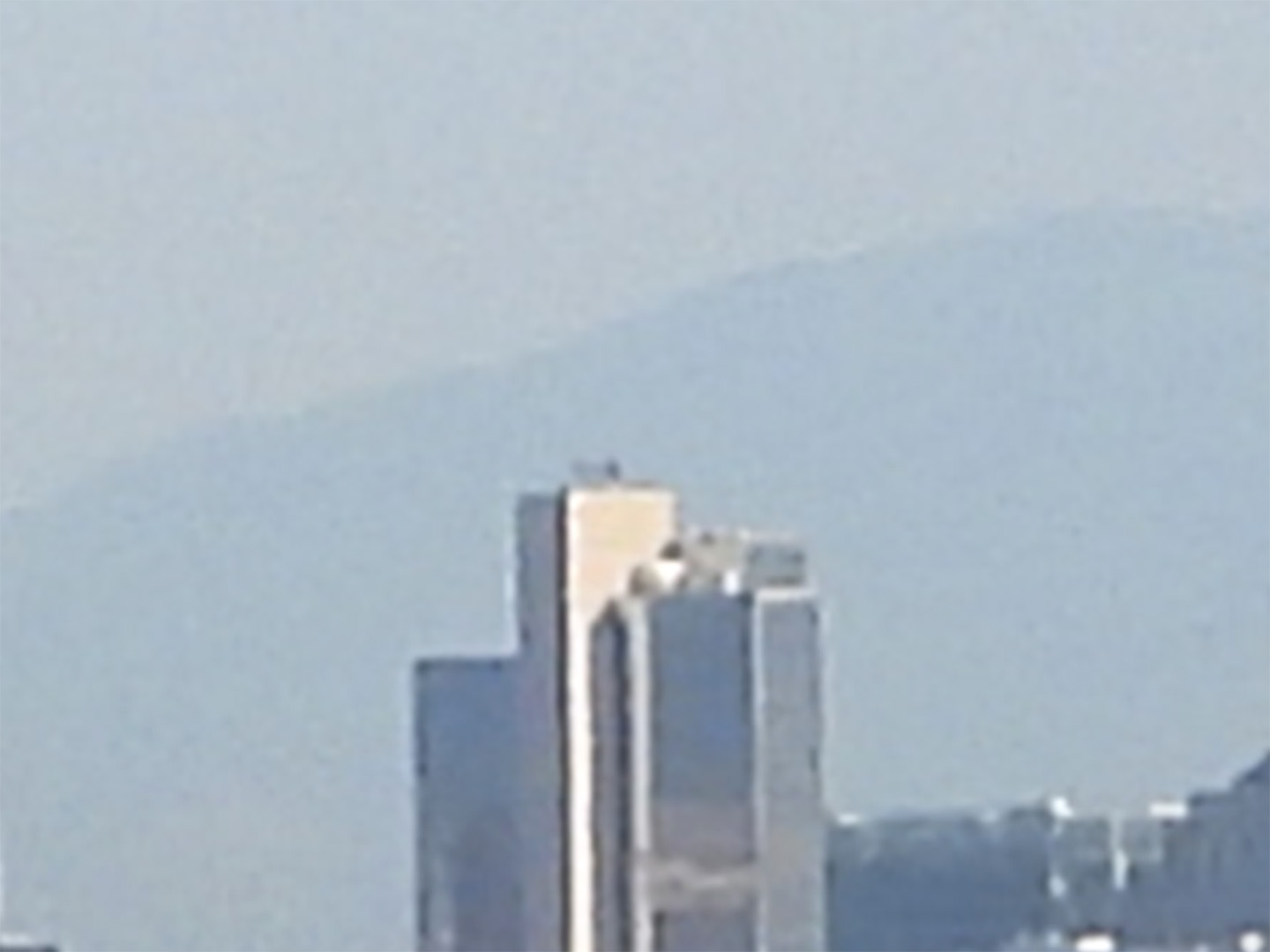 A digital enlargement of the 100mm picture.

We're not introducing any additional detail when we digitally enlarge an image, so the result is a blocky and blurry image.

It's important to note that this example used A LOT of enlargement to demonstrate the point. The trick with digital zooming is use enough of it to make the image look bigger, but not so much that people notice the blocky and blurry effects.

Lots of cameras have offered digital zooming over the years. And in my humble opinion, the results were... well... not great. One of the first things that I do when I get a new camera is turn off the digital zoom. Can the Nikon P1000 change my mind about digital zooming? We're going to find out below!

Our photo shoot today is in Phoenix, Arizona, in the USA. Specifically, we're on Mormon Trail in South Mountain Park. Mormon trail has some amazing views of downtown and the Phoenix area. Our photoshoot location is about 6.4 miles (10.3 kilometers) south and a little east of downtown, so the buildings in the downtown area look a little small from here. If only we had a device that would provide a close-up view of things that are really far away... Oh, wait - we have a Nikon COOLPIX P1000 ultra-zoom camera! 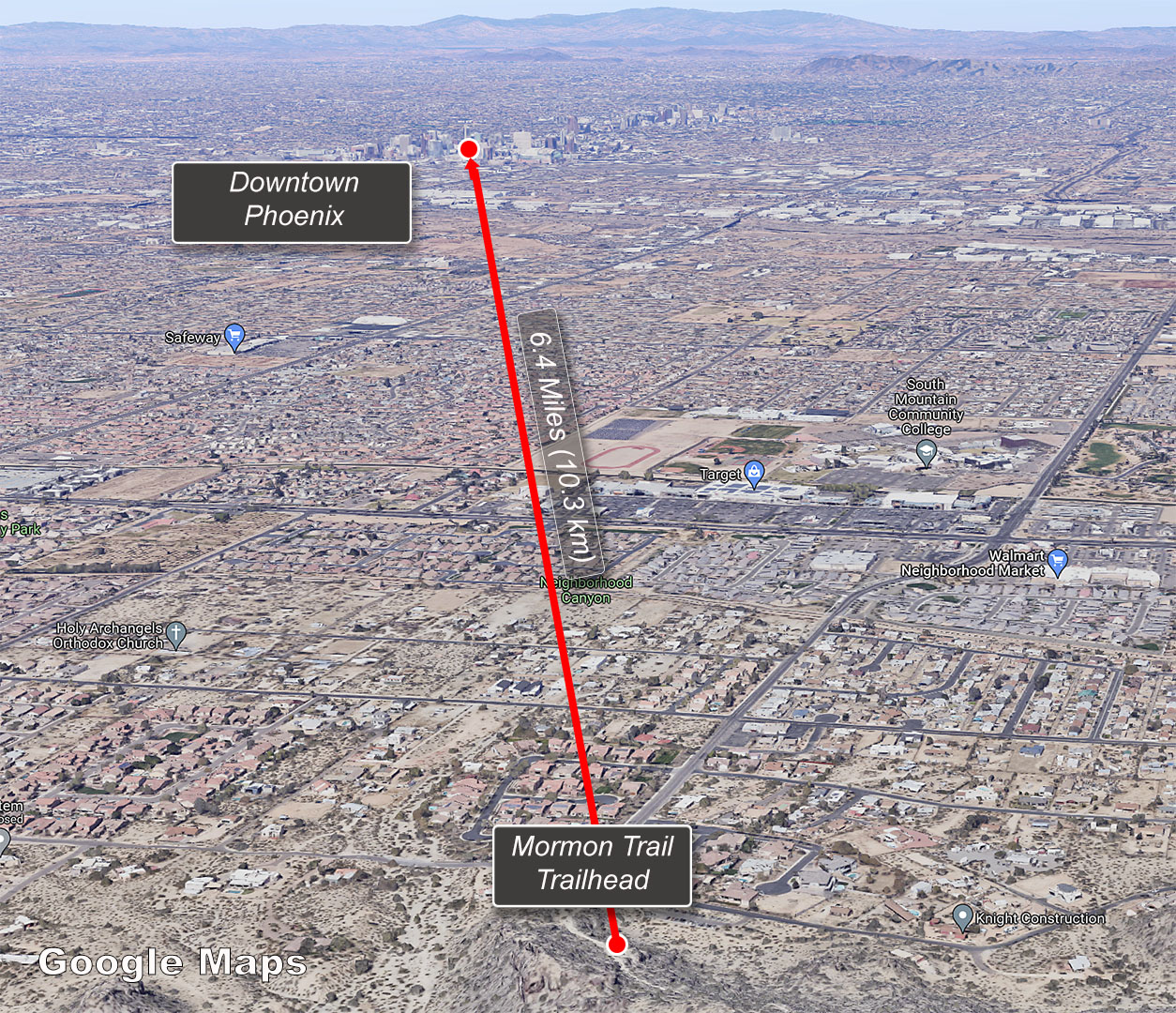 The nice thing about Mormon Trail is that you can get a great view of downtown Phoenix by hiking only an eighth (1/8th) of a mile from the Trail trailhead at 24th Street and Euclid Avenue. The walk to this little overlook is short, but it's fairly steep. However, I think that many people could manage it by walking at a slow pace. And as we say in Phoenix, remember to bring plenty of water if you plan to head out to the trail.

The pictures from our photo shoot were taken about 6:00 in the morning and there was a fair amount of haze in the air. And while it was early in the morning, the pictures were taken in the summer months in the desert southwest of the US where the mornings can be much hotter than other locations at this time. I think the temperature was probably in the mid-eighties and climbing fast so we will see the effects of heat waves in the air. These are just some things to keep in mind when judging picture quality at the higher zoom levels.

Here's the view from Mormon Trail at the P1000's widest angle focal length, which is the 35mm equivalent of 24mm. 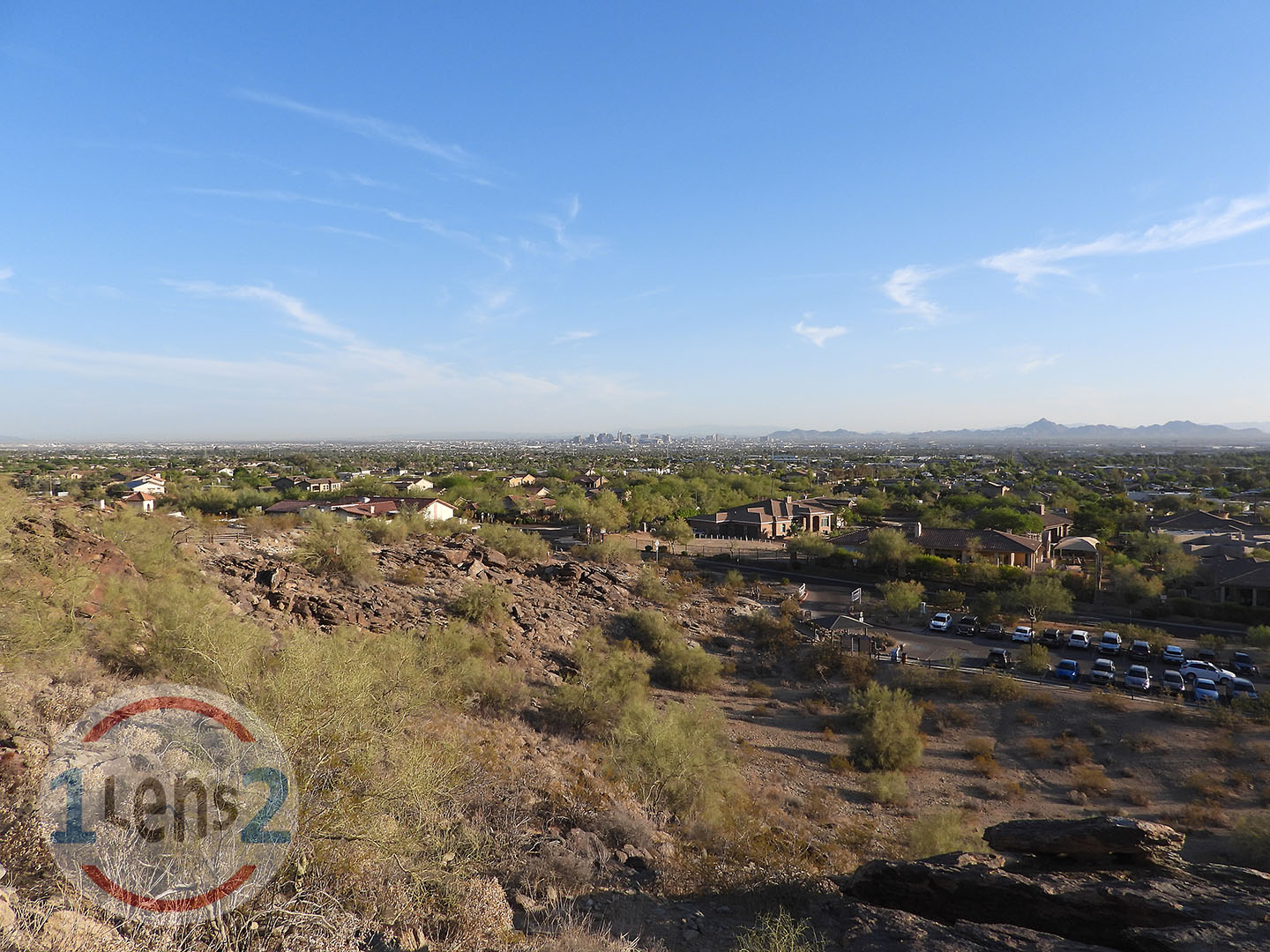 You'll need a focal length of around 200mm or higher from Mormon Trial to get a good shot of downtown Phoenix. 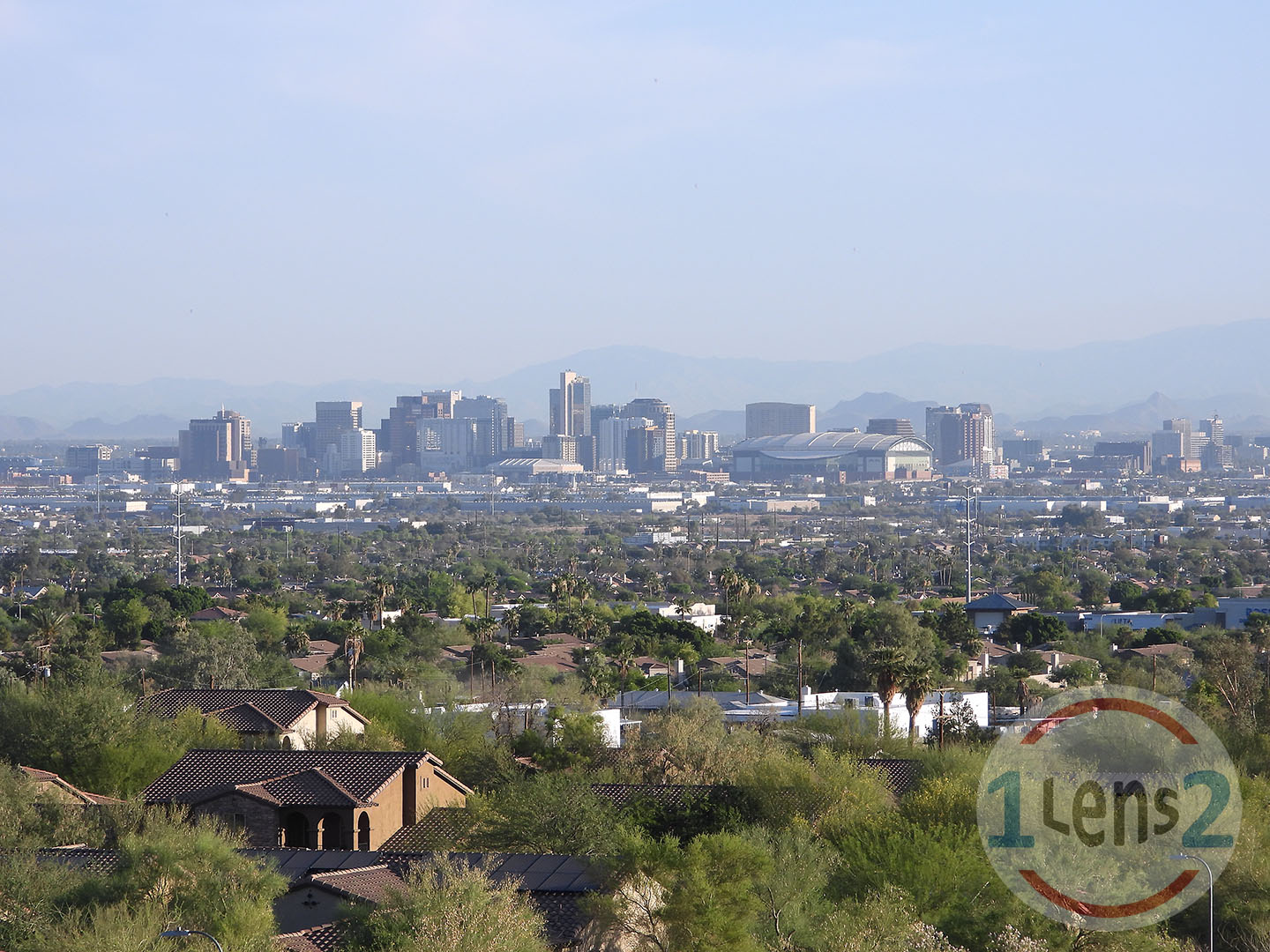 Today's digital zoom test will focus on the Chase Tower. According to the Wikipedia article on the Chase Tower, the building is 40 stories tall with a total height of 483 feet (147 meters). It's the tallest building in Phoenix and the tallest building in Arizona, which makes it a worthy subject for zooming with a super-zoom camera. Chase Bank is actually vacating the building, so the "Chase" sign at the top of the building has been removed. Although in the super-zoom pictures, you can see where it used to be.

Here's a view of the Chase Tower from Mormon Trail at the P1000's maximum optical zoom of 3000mm. As mentioned earlier, it may be early morning, but we can still see a fair amount of heat waves in the air. 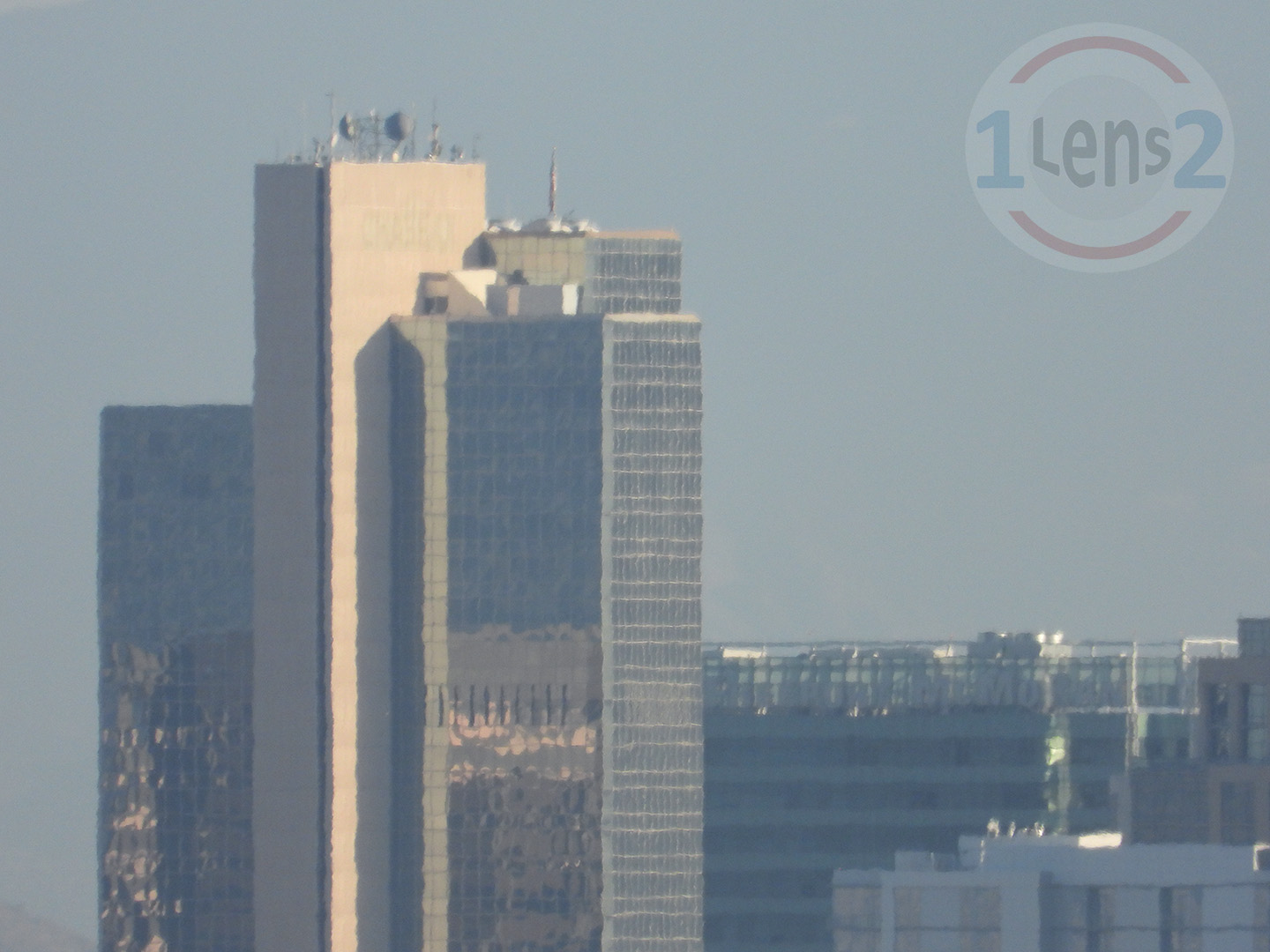 
The image below was taken a 2X digital zoom, or 6000mm. This is the high range of what Nikon calls "Dynamic Fine Zoom". What exactly is Dynamic Fine Zoom? That's a really good question. I searched the Nikon website and the rest of the internet and couldn't find any explanation of what it is. Nikon's website just says that some of their cameras have it and that it extends the zoom range electronically with minimal image degradation. Ummm, OK. Well whatever it is, it looks like this: 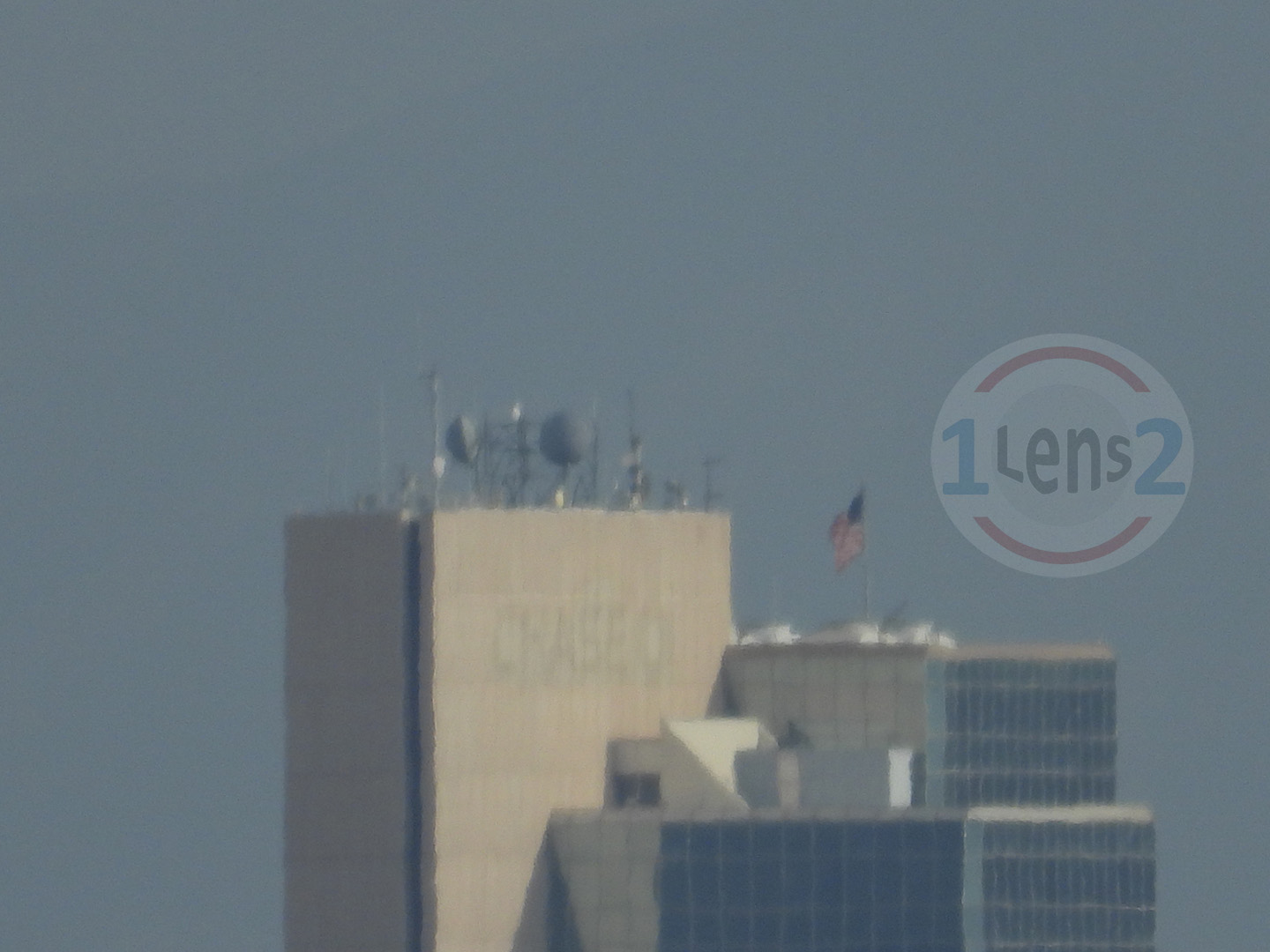 The pictures below were taken at 3X (9000mm) and 4X (12000mm) digital zoom. Like many of the other pictures in this article, you can click on the pictures below to see a full-size view so you can get a better look at the quality of the digital zooms at these extremely high digital focal lengths. 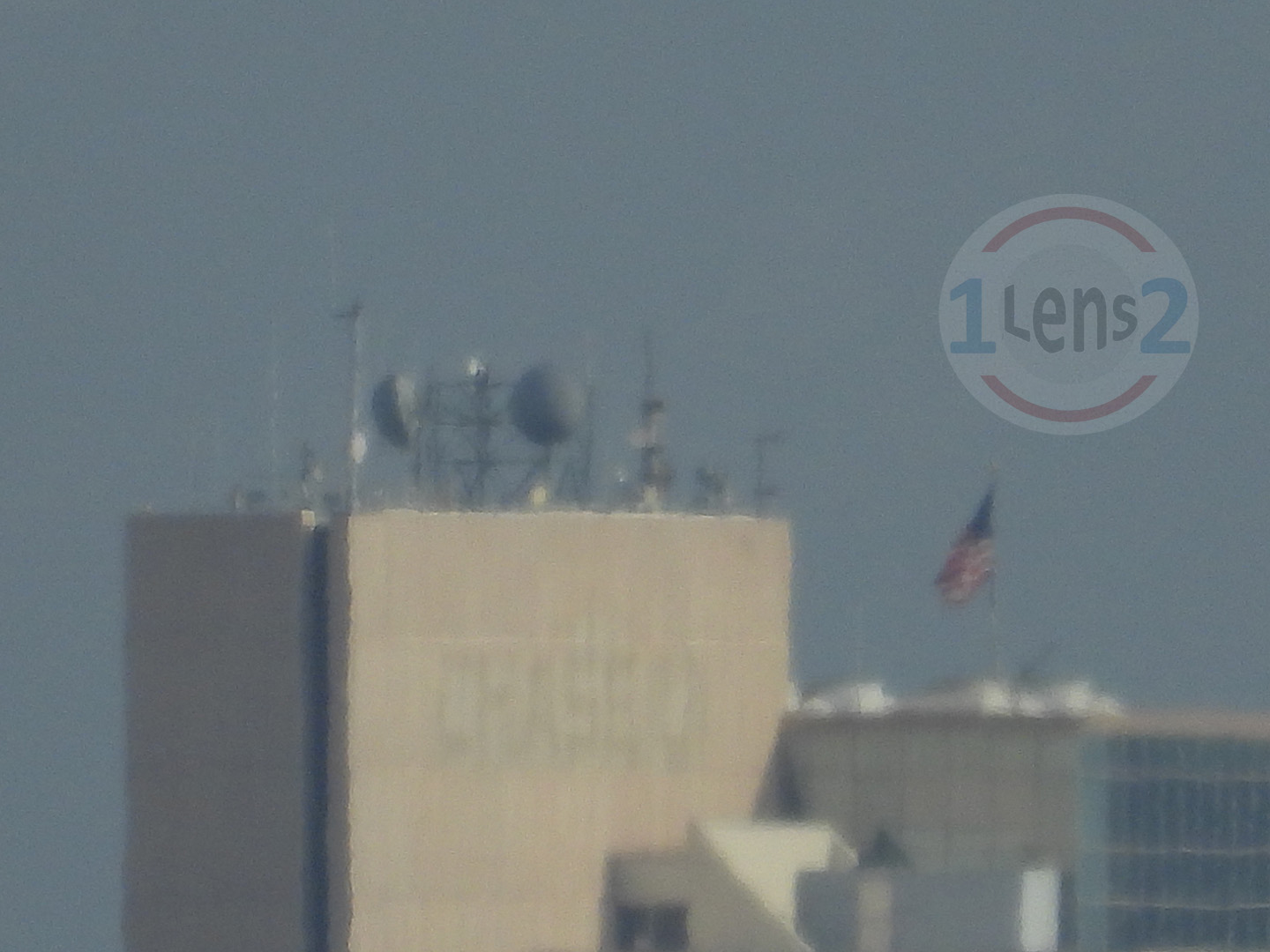 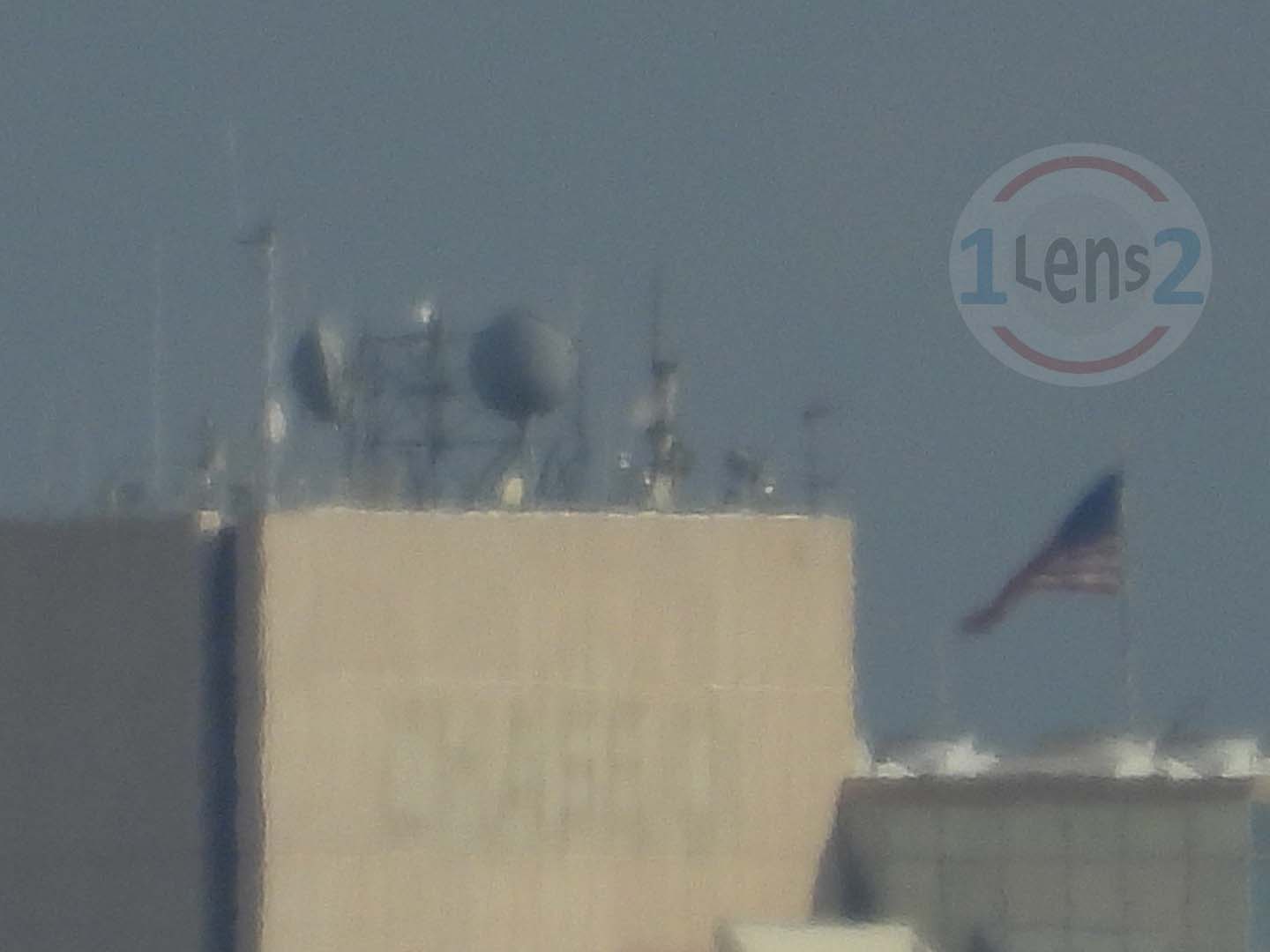 Other than adjusting the color balance a little, straightening the image a smidge and adding the One Lens Two watermark, the digital zoom pictures are straight out of the camera (saved as .jpg). At these digital zoom levels, adjusting the sharpness in post-production didn't have any real positive impact.

The digitally zoomed pictures are obviously not crystal clear. But we wouldn't expect them to be for a number of reasons. The main reason is that the image being digitally enlarged is already zoomed in optically to 3000mm in order to capture a scene that's over 6 miles (10 km) away. That's a lot of atmosphere to be looking through so we're digitally zooming in on an image that already shows degradation due to heat waves and the haze on the air.

Another reason is that digital zooming doesn't introduce any additional detail into the image, so any type of significant digital zoom from any camera is not going to look great by definition. There is also the consideration that the P1000 has a smaller image sensor than some other cameras, but that's a discussion for another day.

I look at the quality of the digitally zoomed pictures differently. I would argue that the digital zoom pictures look great simply because with almost any other camera on the planet, you would not be able to see the transmission antennas on top of the building at all. So, we wouldn't be judging the quality of the pictures of the transmission antennas from other cameras because there would be no pictures to judge :) 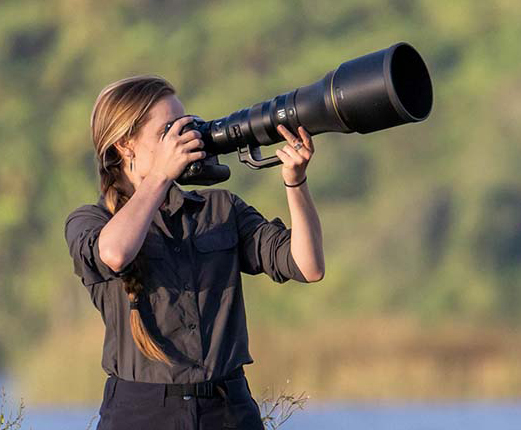 The P1000's digital zoom stops at 4Xs, which is 12000mm. That's a magnification of 500X compared to the P1000's most wide-angle focal length of 24mm! That might seem like enough magnification to some people... but not me! I enlarged the 12000mm image 2Xs in my photo editing software to produce the following image. I increased the contrast a little on this image which seems to help. 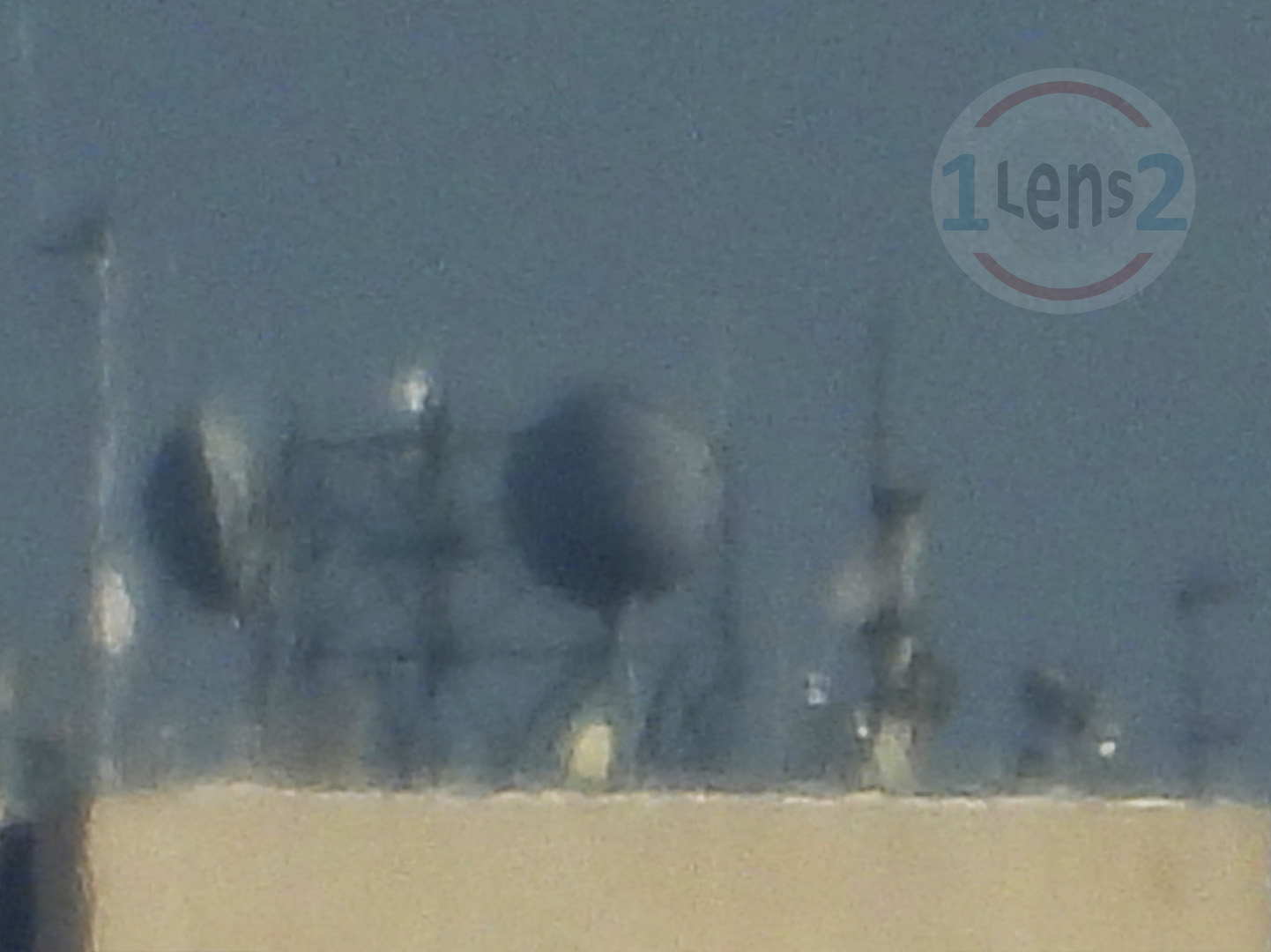 I think that the summary pictures below tell the story. In the 24mm image, we can just barely make out the Chase Tower. In the maximum digital zoom of 12000mm, we can see what's on the roof of the tower. And that image can be further enlarged to twice its size to get an even closer view. 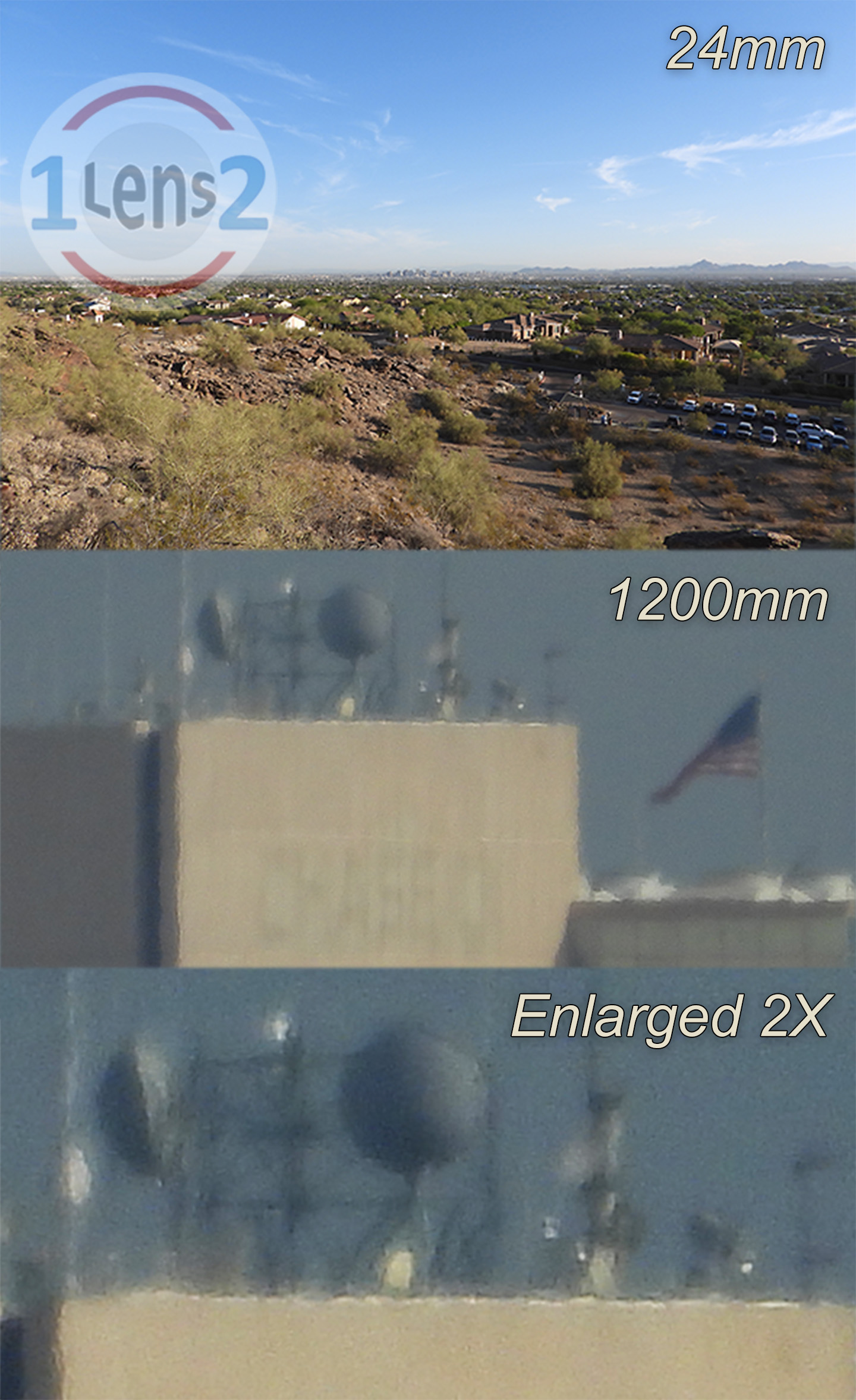 I also recorded some video that show the Nikon COOLPIX P1000's digital zoom capabilities. It includes zooming in on the Chase Tower, another tall building, and some cars driving around the downtown Phoenix area. And at the end, we catch a glimpse of our dinosaur friend chasing cars on the street below. You can watch it all on YouTube by clicking on the picture below. If you enjoy the video then it would be great if you could let me know by liking the video on YouTube or maybe even leaving a comment to let me know that you stopped by! 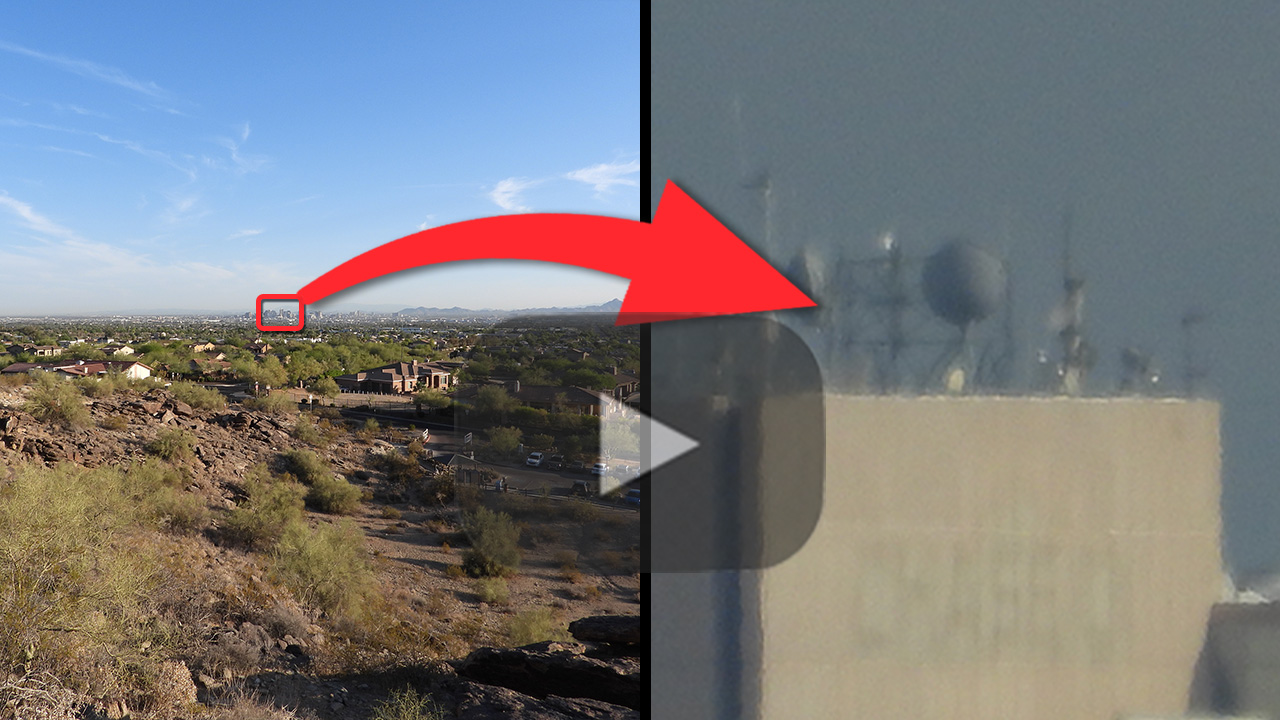