Remember swing sets? Such fun as a kids. Most of us probably have memories of holding on tight as Mom or Dad gently pushed us back and forth. Then as we got older, many of us headed over to the swing sets without grownups so we could propel ourselves as high as possible into the air. On a big public swing set, kids might have been able to reach heights of 10 or 15 feet in the air. But alas, no matter how hard even the most determined kids tried, attaining heights higher than that was simply out of reach.

Out of reach, that is, until some of those kids grew up to be amusement park managers and engineers. Armed with knowledge and access to serious funds, these folks got together and built a gigantic mechanical device that we all dreamed about when we were on traditional swing sets. This awesome supersized swing set is called Skyhawk at the Cedar Point Amusement Park in Sandusky, OH. 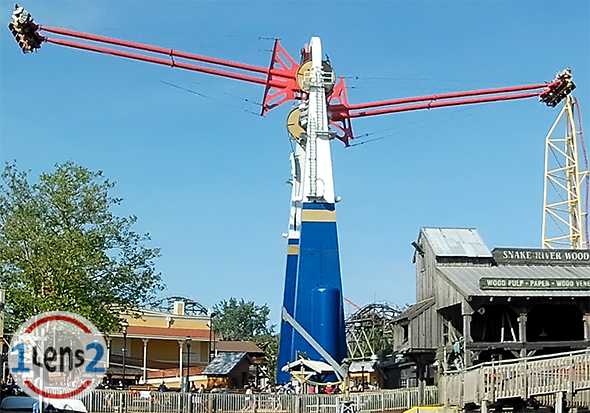 The Skyhawk and Xtreme Swing thrill ride are similar.

There's another one of these mega-swing sets called Xtreme Swing at the Valleyfair Amusement Park in Shakopee, MN which, as far as I can tell, is almost an exact duplicate of the Skyhawk ride right down the the blue and white paint scheme. I think that this article applies to both Skyhawk and Xtreme Swing, but I've only been on Skyhawk, so I'll focus on that thrill ride in this article and in the video at the end.

Just how big is Skyhawk? The tower is 103 feet tall which is about as tall as a 10 story building! I drove all over the city where I live and there are no 10 story tall swing sets to be found :)   The swinging arms are 84 feet long and when they reach their highest point, riders on Skyhawk are 120 feet in the air! That's about as high as a 12 story building! And when Skyhawk gets moving, it swings riders at speeds up to 60 miles an hour! So to those kids on traditional swing sets that want to go higher I say, "Be careful what you wish for!" 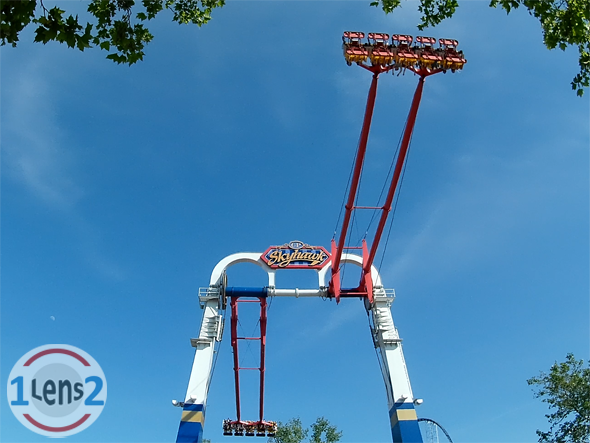 Skyhawk swings you 120 feet in the air!

One of the things that I really like about Skyhawk is that when you're at the maximum height in the air, your looking 12 stories straight down. And then you plunge downward, watching the ground quickly approaching at 60 miles per hour! Another thing that I like about Skyhawk is that the ride has a lap bar rather than an over-the-shoulder harness. This makes you feel more free and in touch with the fact that you're flying though the air. Very cool. 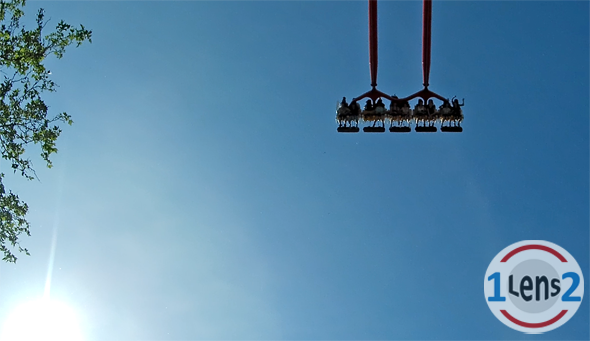 Skyhawk riders 120 feet in the air!

The lap bar plus the fact that the seats are more or less at regular chair height when you're standing on the seating platform means that riders who have a hard time climbing in and out of roller coasters or getting under an over-the-shoulder harness might have an easier time getting in and out of Skyhawk. You just stand in front of your assigned seat, drop down into it and pull the lapbar in. There's a safety strap that attaches to the front of the lapbar, but the ride attendants can take care of that if needed.

Skyhawk uses just a lap bar to securely hold you in your seat.

Traditional swing sets are powered by kids. Kids have a lot of energy, but no matter how much soda and ice cream you feed them, they can't catapult themselve 12 stories in the air on a swing set. So what powers Skyhawk and Xtreme Swing? It turns out that Skyhawk is powered by a massive pneumatic system. Compressed air is pumped into two giant air tanks located next to the legs of the base tower (outlined in red in the picture below) and then released in pulses, pushing the swing arms - and the riders - higher and higher and higher and... The slow pulsing hissing sound you hear in the video below is actually the pneumatic system working.

The huge air tanks for Skyhawk's pneumatic power system are outlined in red.

The downside of Skyhawk is that the ride only last about a minute. Just when you're getting into the swing of things on the ride (did you see what I did there?), the pneumatic system changes its rythm and starts to slow the ride down. I wish the ride was longer, but the short duration plus the capacity of 40 riders at a time does make for a fast moving queue line.

A lot of thrill seekers might be drawn to amusement parks for the roller coasters, but if you're at least 48 inches tall, be sure to reserve some time for Skyhawk when you're at Cedar Point or for Xtreme Swing when you're at Valleyfair. I think these thrill rides are a blast and are great compliments to the roller coasters at Cedar Point and Valleyfair. But be warned, once you ride one of these attractions, the thrill of traditional swing sets will be gone forever.

But a thrill ride isn't the real reason why Cedar Point and Valleyfair built these 103 feet tall towers. I kept my eye on Skyhawk throughout my time at Cedar Point and was eventually able to capture video proof that the main function of Skyhawk is actually to transmit an energy wave to aliens in space! Watch the end of the video below to see it :)

It's one thing to read about Skyhawk and another thing altogether to see and hear it in action. The video below shows the Skyhawk ride at Cedar Point Amusement Park from the start of the ride cycle to its finish as seen from multiple angles. The Xtreme Swing ride at Valleyfair Amusement Park seems to be a duplicate of Skyhawk, so this video will give you a good look at that ride too. Oh, and the end of the video shows how Cedar Point uses Skyhawk to shoot energy waves to aliens in space! :)

Thinking of bringing an Akaso V50 Pro camera to the park? That's the camera I used to record this video, so check out the video to see how well the Akaso performed. I may have used Adobe After Effects on the energy wave scene, but the rest of the video is straight out of the camera. 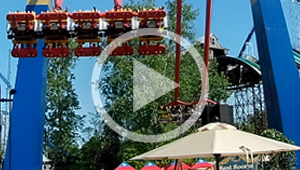 Click to Watch the Video
One Lens Two is not affiliated with Cedar Point Amusement Park, Valleyfair Amusement Park or the Cedar Fair Entertainment Company. This article and the video are Copyright 2019 One Lens Two. All rights reserved. These materials may not be published, broadcast, rewritten or redistributed in whole or in part without the expressed written authorization from One Lens Two.