What would you see if you flew a drone over Walt Disney World in Orlando, Florida twenty years ago? Well, there were no drones or quadcopters back then as far as I know, but you might have seen something like this footage from a helicopter tour of the parks in 1994.

The helicopter flight provided a great view of most of the Disney properties including the Magic Kingdom, EPCOT, Disney-MGM Studios (now called Disney's Hollywood Studios), the Contemporary Resort, the Grand Floridian Resort, the Transportation and Ticket Center and the massive parking lots with what appears to be a million cars in it! Perhaps some of the undeveloped swamp land down below is where Disney's Animal Kingdom would be built four years later?

Zooming the camera in was helpful to get some good shots of a number of the rides and attractions at the parks. There are really nice shots of Cinderella's Castle, Spaceship Earth, and the Tower of Terror, and you can watch the large water tanks in Catastrophe Canyon (which has since been closed) dump tons of water onto the movie set. My favorite scene is the monorail running down the track, bringing guests to the happiest place on earth.

It's pretty obvious that this footage was taken two decades ago. There was no electronic stabilization in consumer video cameras in the 1990s, so some of the scenes had to be slowed down a bit in order to make them easy to see. And the resolution of cameras back in the day wasn't anywhere near what we're accustomed to seeing today, so the size of the image appears smaller on the screen.

The video was shot from the front seat of what appears to be a Bell Jet Ranger, operated by Air Florida Helicopter Charters at 8990 International Drive, Orlando, FL 32819 ( see it on Google maps ). It doesn't appear that the company is flying Jet ranger's anymore. 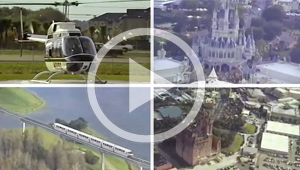 IAAPHX is not affiliated with Air Florida Helicopter Charters or the Walt Disney Company and was not compensated for producing this article or the video. This is an IAAPHX production. All rights reserved. This material may not be published, broadcast, rewritten or redistributed in whole or in part without the expressed written authorization from IAAPHX.