During a trip to San Diego, California, I visited SeaWorld to see the new "Orca Encounter" show. If you find yourself at SeaWorld, you'll want to check out this show. The grace and power of the Orcas is a sight to behold. The video at the end of this article shows the complete show and includes a number of slow motion clips of the orcas jumping out of the water and splashing the audience.

The venue for the show is also new. The entire rear wall of the stage displays videos that that teach the audience interesting things about killer whales in a way that compliments the actions of the animals in the enormous water tank.

The show was in its first few weeks of operation and it looked like the trainers were still working out some of the logistics. There were some short periods during the show where either nothing was happening in the water or the orcas' activities were out of sync with the video on the rear projection wall. But overall, the show was both interesting and entertaining.

If you sit close enough to get good pictures or video of the killer whales in action then you and your camera gear are going to get very, very wet. And I don't mean that there is merely a good chance that you and your expensive camera will a get wet. I mean that you and your gear are absolutely going to get totally drenched! That's because the orcas perform activities in the water at every show that are specifically designed to splash thousands of gallons of water on the people sitting there. Over and over again throughout the show.

This is not a problem that a few swipes of a lens cloth can fix! There is so much water splashed in the "Splash Zone" that your camera can be damaged beyond repair if it's not protected by a waterproof container. Keep in mind that this is salt water which is very corrosive. The splash zone is suitable for those kids that would gladly jump into the water tank if their parents would let them.

Knowing about these splash zones in advance, I sat in the highest row of the stadium to record the footage for the video below. I had my Nikon COOLPIX P900 with me. The P900 can zoom in to the 35mm equivalent of a 2000mm lens, so I could have sat in a helicopter hovering above the stadium and still had a close-up view. The wide shots in the video are not zoomed in that much and the slow motion clips are moderately zoomed. I would have sat just above the splash zone if I was using a camera with a more common zoom lens.

Having seen the show multiple times, I noticed that no two shows are exactly alike. There are a number of reasons for this. As mentioned above, the show is still kind of new, so the trainers are still working out some kinks in the show's timing. Also, sometimes the orcas do their thing on queue and sometimes they don't. And from time to time, it appears that at least one of the animals will make a creative decision about the show's choreography and skip one of the activities so you won't see it at all. Hey, everyone needs a break now and then!

Another reason for the variation between shows is that the trainers seem to cycle members of the killer whale cast though the different activities from show to show, likely to provide some variation in the orcas' day. And since each of the animals has their own style, the same routine can look different from show to show.

So given all of these variations, you might want to see the Orca Encounter show more than once because you'll probably see something at one show that you didn't see in the last one.

My Number One Tip

My number one tip for watching this show is to get to the venue early so that you can get a good seat. What constitutes a good seat? For me, a good seat is on that's close to the tank but not in the splash zone and one that's IN THE SHADE! You'll be walking around the park in the sun all day and, as is the case for most of the venues at SeaWorld San Diego, there aren't many seats in the shade at the Orca Encounter stadium. So I recommend that you get there early enough to get a good seat. If you get there early enough, you'll be able to see the oasis of shade easily. It's much better than holding the park map over your head for the entire show. then

The video below is a combination of two separate "Orca Encounter" shows. The first show runs from start to finish in the video. I recorded slow motion clips of the orcas jumping and splashing the audience during the second show. These slow motion clips pop up throughout the video. As described above, no two shows are exactly the same, so the footage from the two shows don't always match up perfectly in the video. 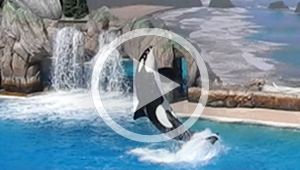 Jwmilleraz is not affiliated with SeaWorld Parks and Entertainment. SeaWorld is the copyright owner of the Orca Encounter show. This article and the video are Jwmilleraz productions. All rights reserved. This material may not be published, broadcast, rewritten or redistributed in whole or in part without the expressed written authorization from Jwmilleraz.