Ah, the lovable swing ride. It's been a staple of amusement parks and carnivals around the world for decades. If there were a TV show about amusement park rides, it would be called "Everybody Loves Swing Rides". You've probably been on a swing ride at some point in your life. On this type of ride, you sit in a seat that's suspended from the top of the ride, often by long chains. As the begins to spin, centrifugal force pushes you away from the central tower and you fly higher and higher through the air. It's been described as flying like a bird. Although the bird in this instance is for some reason flying in a circle over and over and over and over...

Check out my video of the WindSeeker at the end of this article. 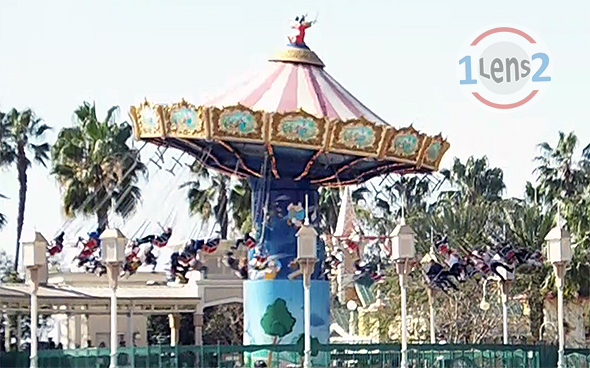 If you want to learn more about swing rides and where they are located around the world, check out this Wikipedia article.

But why have a regular sized swing ride when you can have a spectacularly HUGE swing ride like the WindSeeker at the Carowinds Amusement Park in Charlotte, North Carolina! 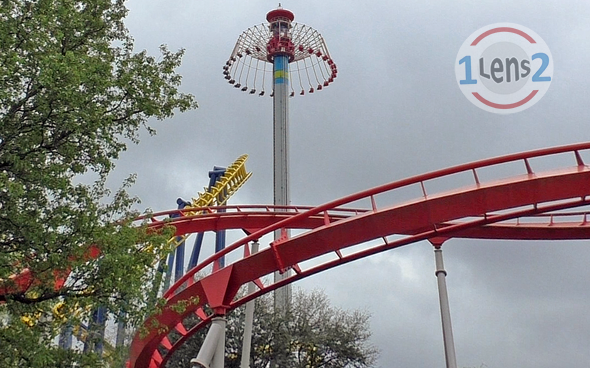 The WindSeeker at Carowinds Amusement Park.

The WindSeeker swing ride is ridiculously tall at 301 feet, or 92 meters high. To put that into perspective, the top of the torch on the Statue of Liberty is 305 feet off the ground. A thirty-story building is also about 300 feet tall. I guess what I'm trying to say here is that three hundred feet in the air is really up there! 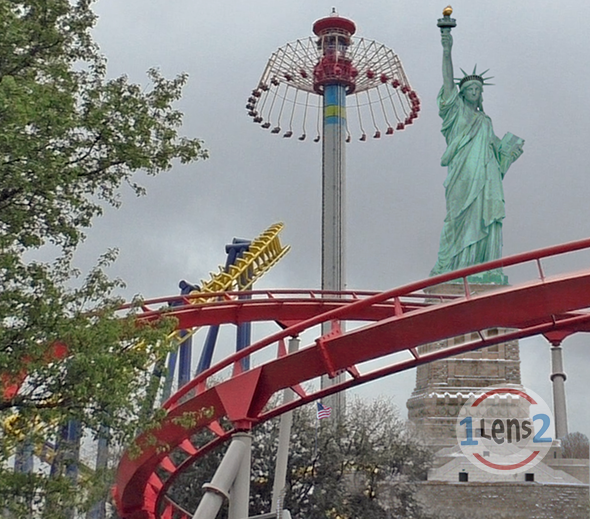 The WindSeeker is as tall as the Statue of Liberty.

The Cedar Fair amusement park company must really like this ride because they built a lot of them. In addition to the WindSeeker at Carowinds, you'll also find this giant swing ride at Canada's Wonderland in Ontario, Cedar Point and Kings Island in Ohio, Kings Dominion in Virginia, and Worlds of Fun in Missouri. There was a WindSeeker ride at Knotts Berry Farm in California, but it was moved to Worlds of Fun and is called the SteelHawk. 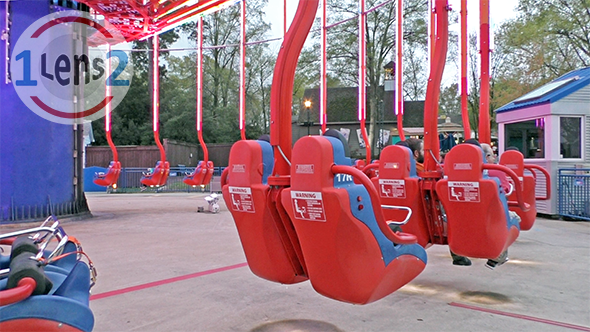 Waiting to load riders onto the WindSeeker.

In addition to being insanely tall, the Windseeker swing ride is also visually interesting. What? You don't see it? Well, that's probably because you've only seen it on a sunny day. As the evening approaches or on dark, cloudy days, the multi-colored lighting system that's built into the ride structure comes on. Sometimes lighting on a ride can be kind of boring, but I really like the lights on WindSeeker. The lights change color and make cool patterns as the ride spins. I think that it looks great from the ground and while you're on the ride, so that's when I rode Windseeker. 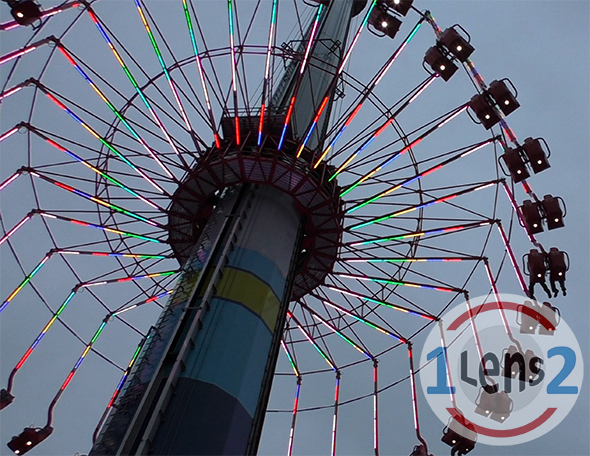 The colorful lighting on the WindSeeker.

But, be careful when you're looking at the pretty light show while standing safely on the ground. They might lull you into thinking that maybe it wouldn't be too terrifying up there after all :) 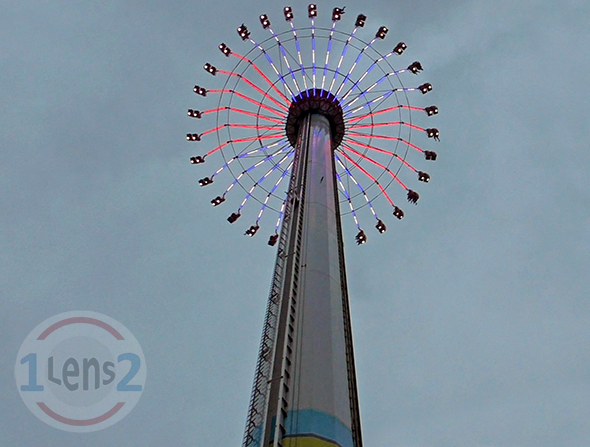 More colorful lighting on the WindSeeker.

After you get into your seat and pull the over-the-shoulder harness down, it takes a while for the ride attendants to walk around and check everyone's harness and buckle them in (there's a safety belt that secures the harness to the lower part of the seat). That's plenty of time to think about the fact that you're sitting in a seat that's about to rise 301 feet in the air with nothing below you but your dangling legs. When I rode the WindSeeker, one person decided that this wasn't a good idea and hopped out of her seat just before the ride attendant would have locked her in. 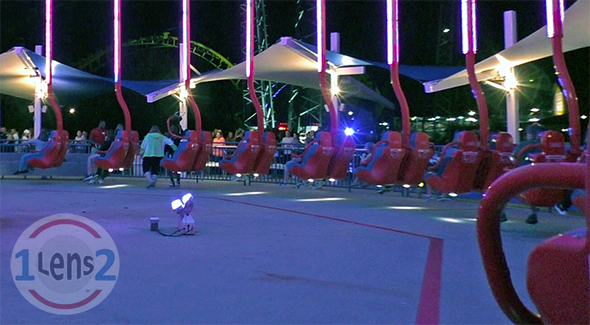 A rider decides not to ride Windseeker.

When the ride begins, the seats initially rise straight up into the air before they start to spin around the center tower. As you rise, the terrestrial sounds of the park below you fade away and are replaced by the sound and feel of the wind in the air. Oh! So that's why the ride is called WindSeeker! 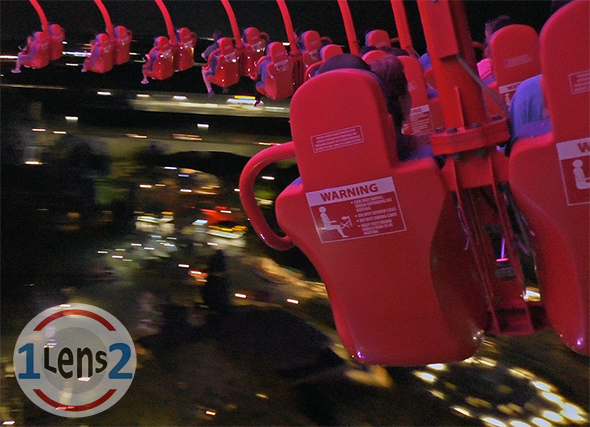 Riding the WindSeeker at night.

Before you know it, you're really high in the sky with a great view of everything in the park below. Even the massive roller coasters are below you. Well, except for Fury 325, of course, which is twenty-one feet taller than the WindSeeker. During the day, you'll be able to see for many miles in every direction. At night, you'll look out into the black emptiness of the dark sky. I found that being up there in the blackness was a unique experience in an amusement park. 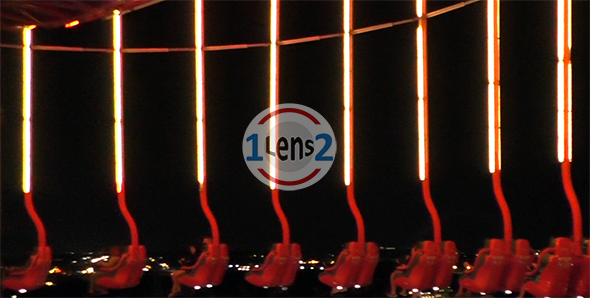 Ascend into darkness on the WindSeeker.

The total ride time is about three minutes and riders spend one minute at the top, going around the tower at 30 miles per hour or 48 kilometers per hour. That gives you plenty of time to look down and contemplate Sir Isaac Newton's law of gravity, realizing that gravity's tendency to pull things to the ground doesn't only to apply to apples :) While flying through the air at an altitude of 301 feet, I made a mental note to thank the person who invented the over-the-shoulder safety harness. I don't know if it was just in my head or others have noticed this, but I had a subtle feeling of slipping out of my seat while I was up there.

It can get pretty windy when you're at the top of the WindSeeker, so you should probably take your hat off before the ride starts. I didn't and had to hold on to my baseball cap the whole time. If you're holding on to your hat and heights aren't your thing, then then you'll only be able to desperately cling to the harness with one hand.

I enjoyed riding the WindSeeker and I especially liked riding it at night. I thought it was great that someone took a little extra time to program some cool patterns for the changing, colored lights on the ride. If you don't like heights or have a heightened fear of falling then this ride is definitely not for you. Everyone else should take the WindSeeker for a spin both during the day and at night. But seriously folks, does a swing ride really need to be over 300 feet tall? I think we all know that the answer to that question is... yes!

By the way, if the WindSeeker isn't tall enough for you then you should head over to Six Flags over Texas or Six Flags over New England and ride the SkyScreamer. Those two identical swing rides will lift you 400 feet into the air!

Click on the picture below to see the WindSeeker in action, including my ride at night. And you'll see the changing, colored lights on the ride. Did I mention that I like the lights? And not a lot of people know this, but there's a secret airport close to Carowinds and sometimes giant aircraft fly right by the WindSeeker! Or was that only in my imagination? If you like the video then please consider hitting the like button and subscribing to my YouTube channel. 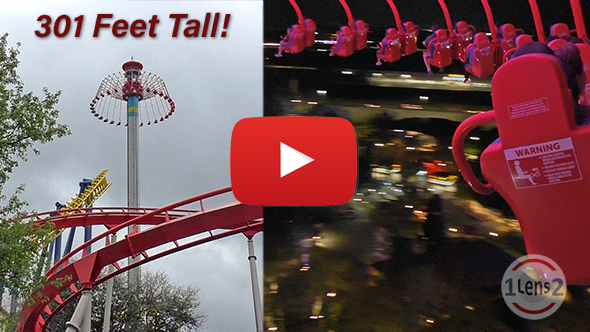 Thanks for reading this article and watching the video! If you liked it then check out the related articles and videos below. Or browse through all of my articles here.