A ride on the Disneyland Fire Dept. Engine No. 1

On August 16, 1968, Disneyland added a vintage fire engine to its lineup of vehicles that carry park visitors up and down Main Street. The design of the fire engine, called "Disneyland Fire Department Engine No. 1", is largely based on a 1916 American LaFrance hose and pump truck, although it's not an exact replica. For comparison, you can see a restored 1916 American LaFrance on the Los Angeles County Fire Museum web site. The Disneyland fire engine has since been converted to run on natural gas which is better for the environment and for the people walking along side of it on Main Street. 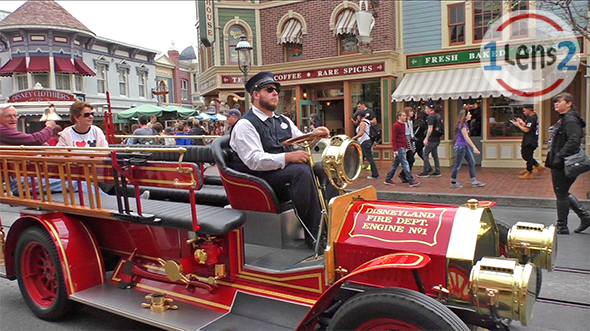 The fire engine runs between the Town Square at the park's main entrance and Central Plaza near Cinderella's Castle. Although the fire truck is capable of speeds of around 40 MPH, Disneyland cast members drive the vehicle at around 5 MPH on the often crowded Main Street. The fire engine is a great way to get up or down Main Street without having to walk or navigate the crowds. But don't expect to catch a ride on the fire engine in the rain. Because it doesn't have a roof, Disneyland pulls the fire engine off the road when it rains. That keeps the truck dry which in turn keeps guests from getting soaked after trip along Main Street in the rain. 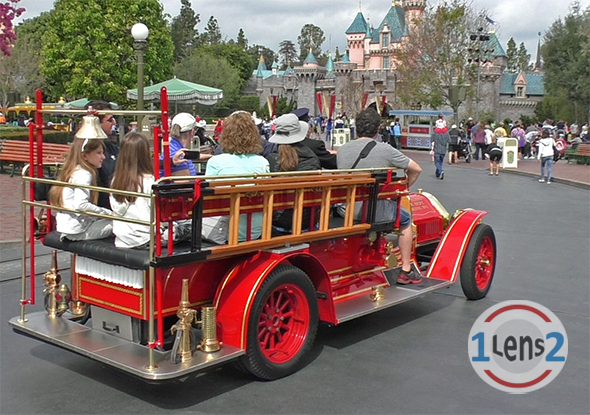 In my video below, the cast member driving Disneyland Fire Engine No. 1 jokingly shared his thoughts about operating Main Street vehicles while it's raining in the park:

"This is the only one that doesn't run on Main Street during the rain because it doesn't have a roof. The others aren't really dry, there's the illusion of dry..."
After I recorded the video of my ride on the Disneyland fire engine, I learned that while there are a number of cast members that drive the fire engine, one of the drivers - named Steve Finley - has been ferrying park visitors up and down Main Street for over 40 years! I wonder if Steve was driving the fire engine in my video? 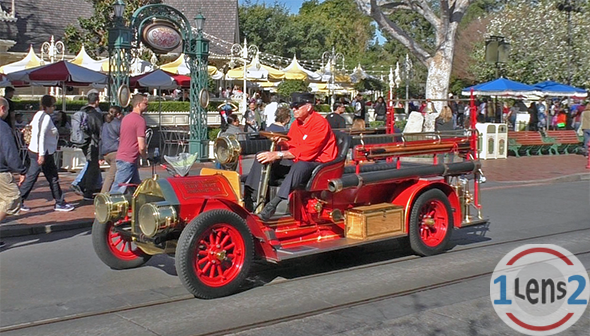 The fire engine is associated with a couple of other well known Disneyland personnel. Legendary Disney Imagineer Steve Gurr designed the fire truck and Walt Disney was known to drive the fire truck around the park in the morning before the park opened. 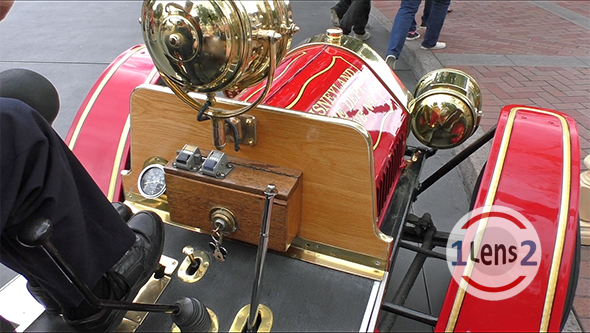 Most people catching a ride on the fire engine sit in the back of the vehicle. That makes sense as the main seating area is in the back. I like to sit in the front passenger seat so I can have a conversation with the driver. Disneyland cast members are delightful to talk with and the fire engine divers are no exception. I've found that they have some pretty interesting information about the fire engine, Main Street and lots of other aspects of Disneyland Park. Being up front also gives you a chance to see the cast member driving this early 1900's vehicle and you get a great view as you drive down the center of Main Street. 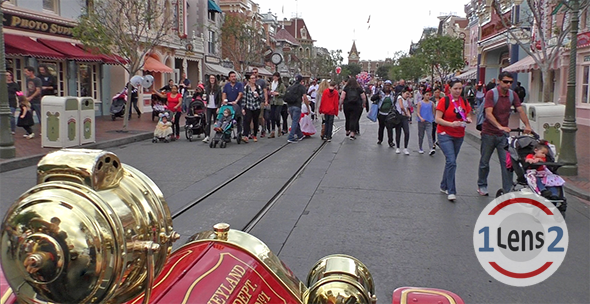 A front seat view from the Disneyland fire truck.

Main Street can get really crowded with people and it's amazing to watch the cast member drive navigate through the crowd without running into someone. The reality is that it's exciting to be at Disneyland so there are some folks on Main Street that are not fully in touch with the reality happening around them, like, for example, a fire engine coming their way. During the ride that I recorded in the video below, the driver explained how he predicts which park visitors might be a collision risk. The fire engine has an old-style horn that the driver squeezes to make a noise. If you listen to the driver's use of the horn, you can hear how he or she uses different sound patterns to convey different levels of warning to the people on the street. Clearing the way is an art and I wonder if Disneyland conducts horn classes for drivers? 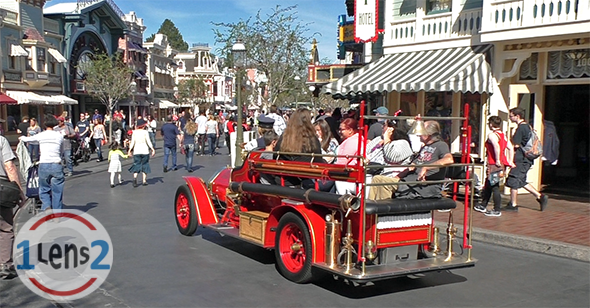 Disneyland has a saying that "every role is a starring role" and you can see this when you ride up front. Fire engine drivers aren't just navigating down a crowded street. They are interacting with what can be hundreds of guests on any given trip. Sometimes it's a smile, a nod of the head or a wave to a guest. Sometimes it's captivating a passenger with interesting stories like in my case. And sometimes it's a playful moment with a guest like you'll see two minute and twenty seconds into the video below. At that 2:20 mark, there is a man on a scooter who was momentarily unsure which way to turn to get out of the way of the fire engine. If you watch the reflection of the cast member in the brass light housing on the fire engine, you can see him pretending to steer out of control which makes the man on the scooter and the boy walking next to him smile. These moments remind you that you're not riding on "a" fire engine - you're riding on a "Disneyland" fire engine.

The Disney Fire engine recalls a time gone by.

Watch the video below to take a front seat ride on Disneyland Fire Engine No. 1 from Cinderella Castle to the main entrance. You'll get a great view of Main Street, USA and hear some delightful conversation with the Disney cast member driving the fire truck. I didn't want to put the camera in the driver's face while he tried to navigate the very crowded street that day, but you can see his reflection in the brass housing of one of the fire engine's front lights in the lower left portion of the video screen. the video 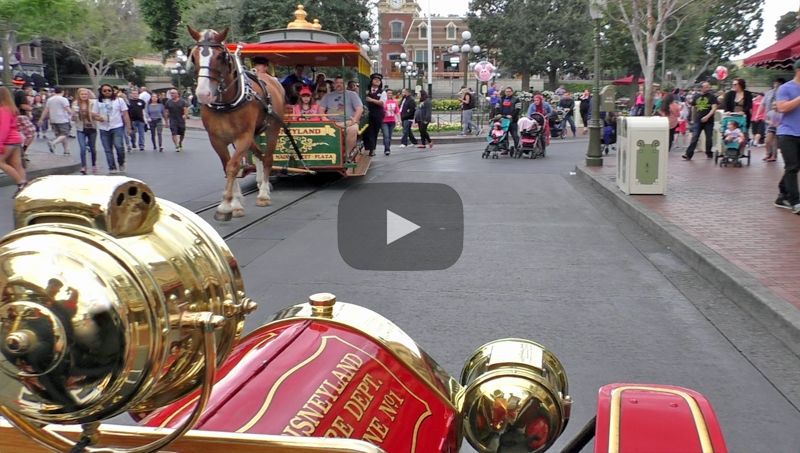 Click to Watch the Video
This article, the pictures and the video are Copyright 2020 One Lens Two. All rights reserved. These materials may not be published, broadcast, rewritten or redistributed in whole or in part without the expressed written authorization from One Lens Two.