While in Los Angeles for a convention, I stayed at the Hotel Figueroa. My room was noticeably small, but it had a unique decor and charming historical feel that you don't often see in the corporate hotel chains. If you're shopping for the lowest price then you'll find yourself in a small room like the one that I stayed in. Larger rooms and suites are available for a higher price. Most of the hotels in Los Angeles are of course unnecessarily expensive, but the Hotel Figueroa was at the lower end of the price range for the period that I stayed there.

The room was particularly clean for the duration of my stay. Services at the Figueroa Hotel were quick and provided with a smile. Business travelers should be aware that the less expensive rooms don't have a place where you can work.

The Los Angeles Convention Center, the Staples Center, the Grammy Museum and the restaurants in the area were a short walk from the hotel. Don't expect a view of the surrounding area, however, because looking out the window of all but a few of the rooms in the "E" shaped building provides a potentially claustrophobic view of exterior hotel walls.

Overall, I enjoyed my stay at the Hotel Figueroa and it met my needs on this trip. If you plan to spend more time in the room - like working while you're traveling for business - then you might need one of the larger rooms. I don't generally spend much time in a hotel room, so I would stay at this hotel again.

That's my quick summary. See below for more details and pictures.

The room that I stayed in was really nice, but it was also really small. I didn't spend a lot of time in it and I was traveling alone, so space wasn't an issue for me. As far as I can tell from the hotel's website, the room was either 190 or 220 square feet. This is not a space to which you can invite your friends to pass the time. Larger rooms and suites are available at higher rates. 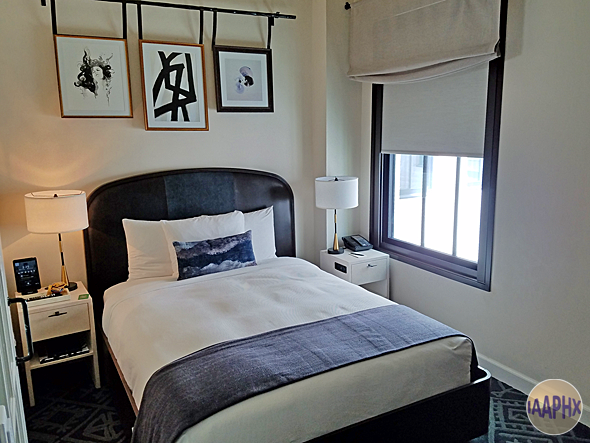 Another aspect of travel logistics that you'll want to keep in mind is that there's no place in the room to have a meal or work on your laptop. Other than the small bench under the TV that's intended for your luggage, your only option is to eat and work on the bed. One way to solve this problem is to have the hotel staff bring an ironing board to your room. You can sit on the edge of the bed and use the ironing board as a table. 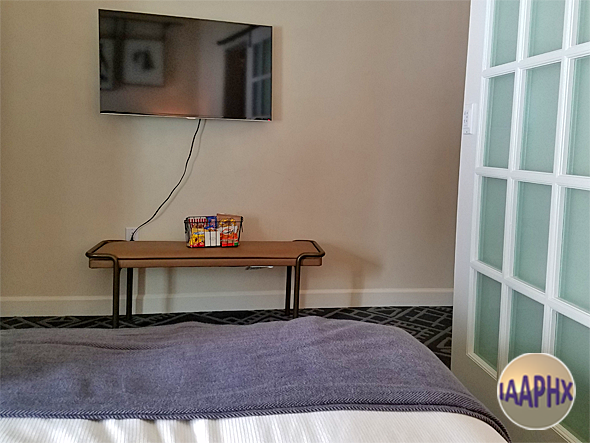 The bathroom didn't feel any smaller than other hotel bathrooms and it, along with the rest of the room, was very clean throughout my stay. It was nice to see the brushed brass bathroom fittings and the custom decorative tile on the floor and the walls. The only thing lacking was counter space by the sink so you'll need to get creative when figuring out where to place items! 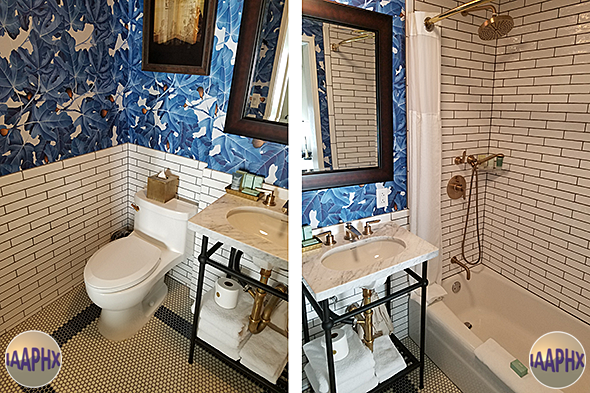 Hotel Figueroa makes up for the size of the room with unique and interesting style that you don't often see in the corporate hotel chains. The building has a great historical look and feel inside and out that is reminiscent of the early twentieth century when it opened as a women's hostelry. That likely explains the small rooms. As described on the hotel's website:

In 2016, the thriving arts, dining and business scene inspired a comprehensive revitalization to restore the hotel, drawing inspiration from its original Spanish Colonial decor and its historical position as the center of Downtown L.A.'s vibrant cultural scene.

The room and the rest of the hotel were a pleasure to come back to at the end of the day. More than once during my stay, I took some time to walk around the building and enjoy the charm of this hotel which dates back to 1926! You can see more of the hotel in the next section below.

The building is shaped like the letter "E" when viewed from above. Because of this, there aren't many rooms with a view. The window of most rooms provides a view of the exterior wall of another part of the hotel which is about thirty feet away. 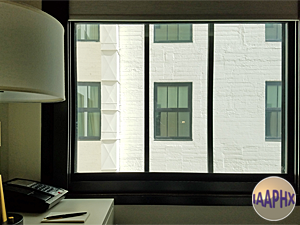 If you want to see what's going on outside, you'll have to look out the windows by the elevators or in other parts of the hotel. By the way, the Figueroa has a thirteenth floor so if you're superstitious then choose your room wisely! 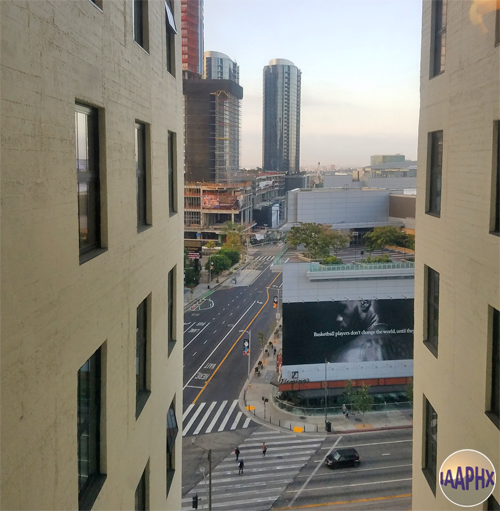 The hotel's website describes itself as a "modernized historic hotel" which I think characterizes the room nicely. The room has a delightful historical feel, but it also has some modern conveniences, including a USB charging port with electrical outlets on both of the nightstands that are easily accessible from the bed. 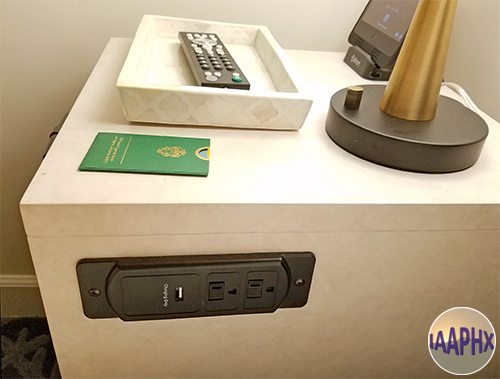 The lighting throughout room was subdued which made for a relaxing ambience after a long day of work or play, but there are times when bright lights are pretty darn helpful, like when you're shaving or putting on makeup (or so I'm told).

Calls to the front desk for service were addressed pleasantly and quickly. The rooms don't have their own ironing board and iron, so I called the front desk and asked for them to be delivered to my room. It was there in a matter of minutes. I also asked that someone stop by and take a look at a minor item in the bathroom. The maintenance guy was there in under five minutes and he completed his work with a smile. There's even a doorman or another hotel staff member at the hotel's front entrance most of the day who will open the door for you and greet you with a smile.

Another nice touch was the free basket of snacks in the room. Just like when you're home, there are times when you just need a little something to eat when you're in the room and it can be a hassle to trek out to the store when you're traveling to buy snacks. Over the course of the few days that I was there, I ate them all! Wait - is that bad? 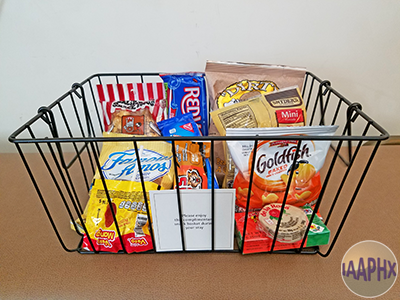 The room also has a min-refrigerator stocked with sodas and alcoholic beverages, but you'll have to pay for those items. The refrigerator is located inside the armoire next to the TV. 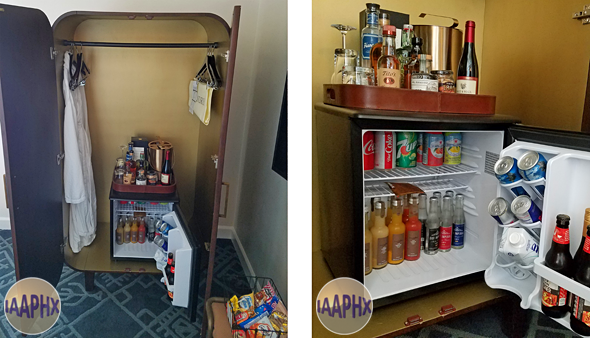 The hotel has a nice lounge and a restaurant. My schedule on this trip included pre-existing plans for most the evenings, so I didn't get a chance to go to the lounge or the restaurant, but I did walk down there and it seemed to be bustling with activity most nights. Except for when I took the picture below (it was late afternoon). This area is steeped in the hotel's Spanish Colonial decor and it looked like a comfortable place to relax after a long day. 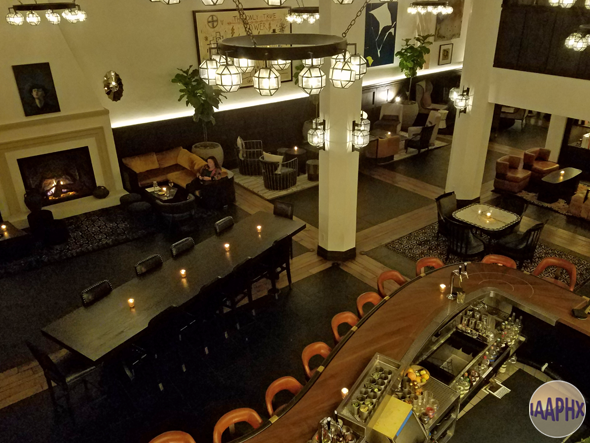 That sense of history can be felt throughout this delightfully old hotel. While waiting for the elevator one morning, I noticed a mail drop for an old Cutler Mail System - also known as a mail shute - built into the wall by the elevator. Back in the early 1900's, people would drop their mail into the drop box and it would fall down to a collection bin presumably on the first floor. 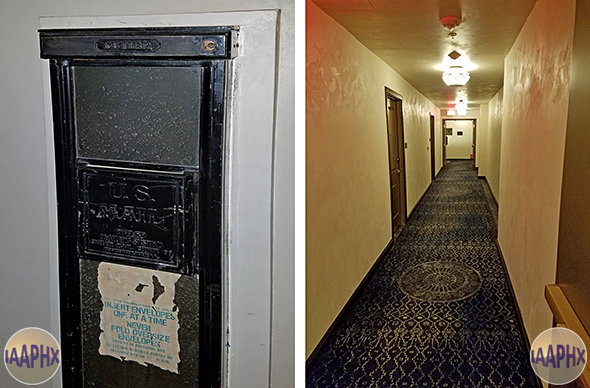 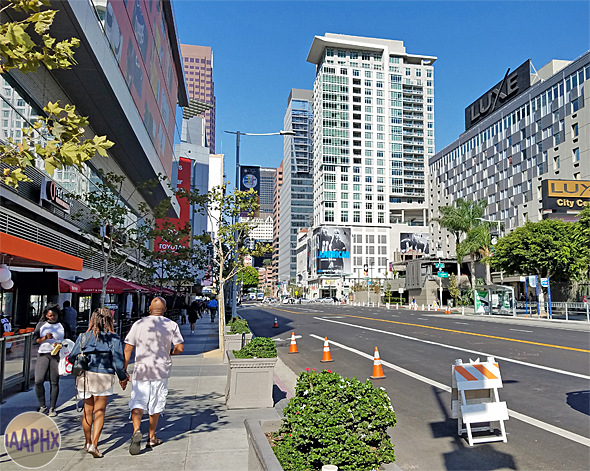 The Staples Center is home to a number of LA sports teams including the Lakers, the Clippers, the Kings and the Sparks, plus they hold music concerts there too. The Convention Center holds... well, conventions. I felt comfortable walking to either of these destinations during the day or early in the evening, but walking outside of that area didn't seem like a good idea at night.

There are a number of restaurants and clubs a block away from the hotel, mostly in and around L.A. Live at Microsoft Square. The Grammy Museum is also located here. 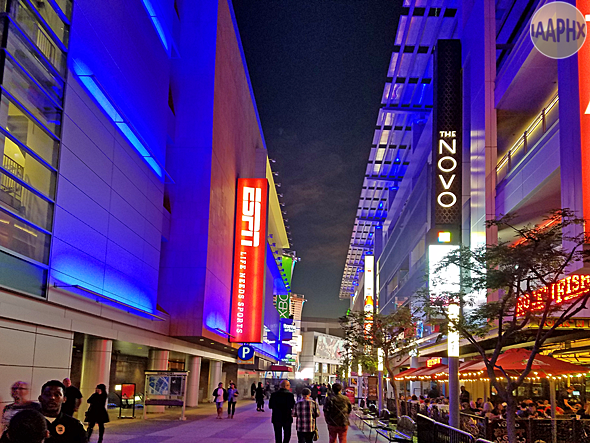 The Original Pantry, an iconic LA breakfast restaurant is one block from the hotel in the other direction. I would think anyone would be able to find something acceptable if not delicious to eat in the area. I'm sure there are other interesting places and restaurants in this area, but my travels only took me between the hotel and the convention center.

On a related note, I didn't have a problem getting an Uber back to the airport from the hotel. The car was there in about ten minutes and I saw a few other cars in the area on the map in the Uber app.

I don't know how big the rooms are at the other hotels in the area, but I imagine that the small rooms at the Figueroa helped keep the room rate down relative to the other hotels. People who don't mind the smaller rooms will appreciate the lower price option.

I was in town for a relatively large convention so the room rates for all of the hotels that I checked were higher than they would be at other times. During that period, hotel rates in the area ranged from $300 a night to over $500 a night. My room rate at the Figueroa Hotel was $302 (average rate for Friday, Saturday and Sunday nights).

A quick check of the hotel website while I was writing this article showed that the lowest nightly rate was $180 if you reserved the room well in advance. On the other hand, reserving a room two months in advance for New Year's Eve at the Figueroa will cost you $500 for the night.

Given the rates of hotels in that area, I thought the Figueroa Hotel was a reasonable value given its charming decor and its proximity to the Staples Center, the convention center, restaurants and the local night life. I just don't think any of the hotels in the area should cost so much.

IAAPHX is not affiliated with the Hotel Figueroa and was not compensated for producing this review. The pictures were taken on location at Figueroa Hotel in Los Angeles, California and the surrounding area. This is an IAAPHX production. All rights reserved. This material may not be published, broadcast, rewritten or redistributed in whole or in part without the expressed written authorization from IAAPHX.