The Space Shuttle Endeavour on Display

From 1981 to 2011, the Space Shuttle was NASA's work horse spacecraft, ferrying people, supplies and equipment into Earth orbit. There was a prototype shuttle named Enterprise and five operational shuttles named Atlantis, Challenger, Columbia, Discovery and Endeavor. Collectively, they logged 1,320 days of flight time and travelled 537,114,016 miles. For the folks keeping score at home, that's over a half a billion miles. There are a lot more amazing and interesting statistics about the shuttles in NASA's Space Shuttle Era Facts. 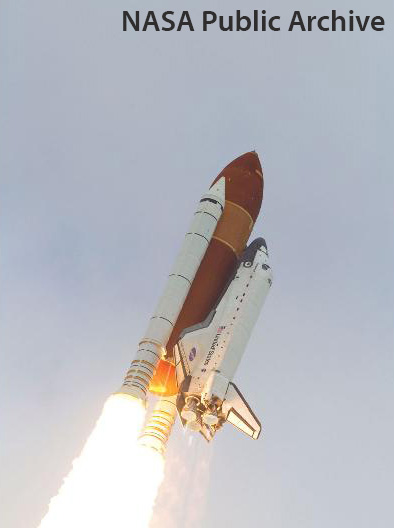 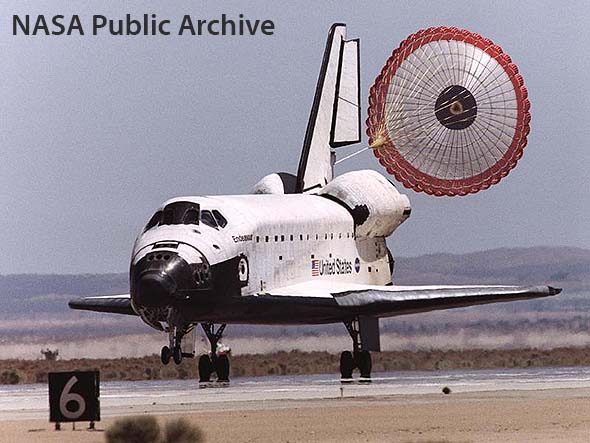 In this article, we're going to talk about Endeavour... because that's the one that I went to see :) Endeavour was the last Space Shuttle to be built and was in service from 1992 to 2011. During that period, it travelled almost 123 million miles. To put that into perspective, that's how many miles you would travel if you drove between New York and Los Angeles over 44,000 times! Endeavour's 25th and final mission was the second to last flight of the space shuttle fleet.

By the way, does the name of this shuttle seem to be misspelled? If you were wondering about that then you're not alone. In the United States, it would normally be spelled "Endeavor". But this space shuttle is named after a British sailing ship named "Endeavour". 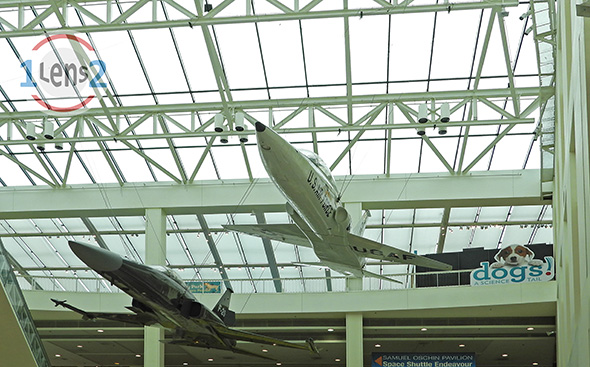 After it was taken out of service, Endeavour was moved to the California Science Center located in Exposition Park in South Los Angeles. This epic trip included a ride on top of a Boeing 747 and being driven by a mechanized transporter through the streets of Los Angeles. The trip is documented in a video that plays in the Endeavour exhibit at the science center and I highly recommend that visitors take the time to watch it.

You can click on some of the pictures in this article to see a larger view. Plus, there's a video of the Endeavour exhibit at the end of the article.

One of the California Science Center's many exhibits is the Air and Space exhibit which covers aircraft, spacecraft and space probes. There are lots of interesting things to see in all of the science center's exhibits, but I was particularly drawn to this exhibit when I visited in November 2019. 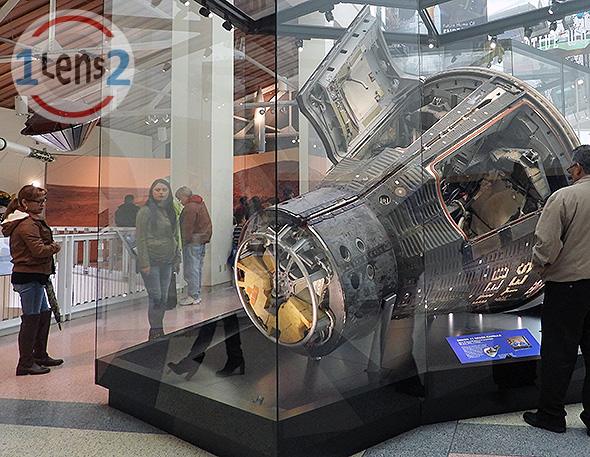 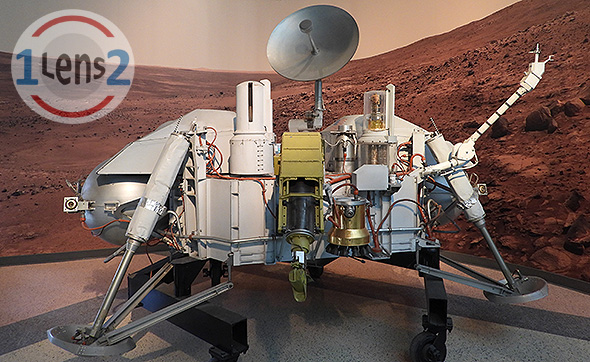 The Viking lander on display at the CA Science Center.

Of all the things to see at the CA Science Center, my hands down favorite was the Space Shuttle Endeavor that was on display in the Samuel Oschin Pavilion. 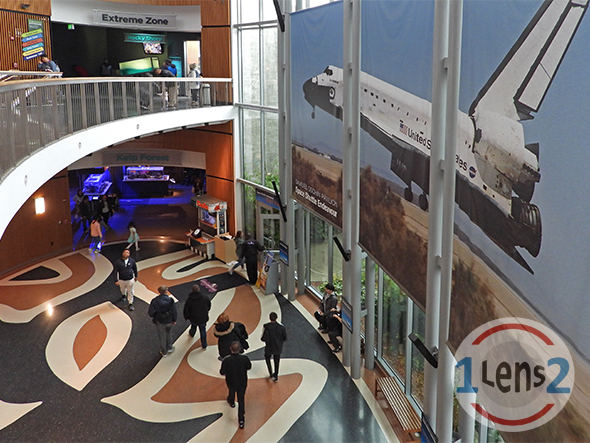 The entrance to the Samuel Oschin Pavilion.

In the first section of the exhibit, you can learn about the various components of the shuttle launch, orbit and landing systems and what it was like to live in the space shuttle. Information about each display area is posted so you can read about the items that you're looking at. For example, here's the information posted for the display of the actual tires that were on Endeavour when it landed for the last time at the Kennedy Space Center.

You can see the significant wear on one of the tires which happened when it made contact with the runway during the landing. 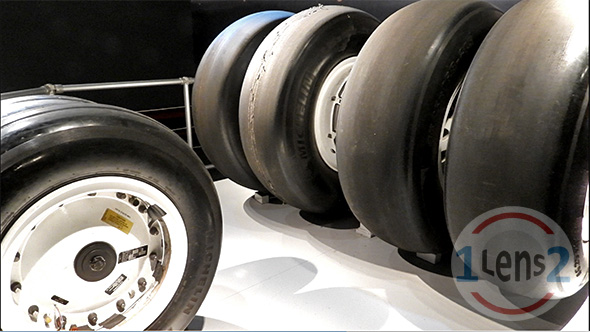 The Endeavour Tires on Display.

Another item on display in the first part of the exhibit is the nose cone that was mounted on top of the large orange external tank. It provided an aerodynamic point to Endeavour to help it slip through the atmosphere, it covered some vents and sensors, and it acted as a lightning rod. 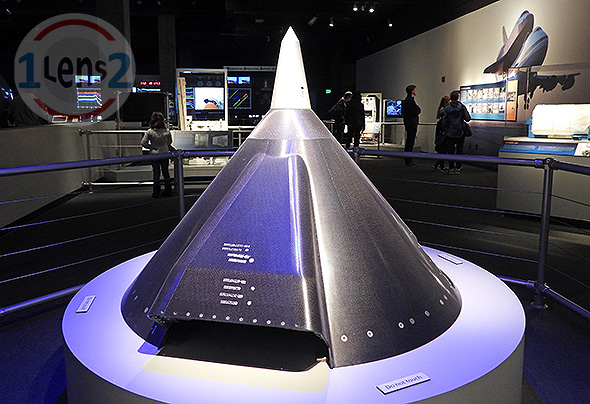 There was also a fuel cell powerplant that generated electricity for the shuttle and produced water as a byproduct, a food rehydrating machine and a mock-up of mission control. 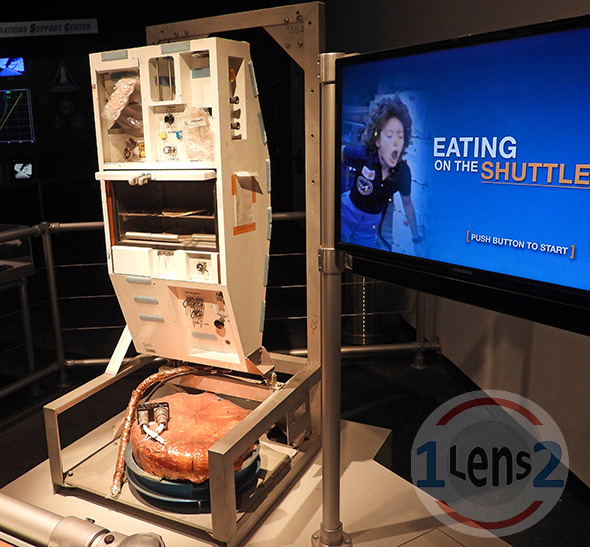 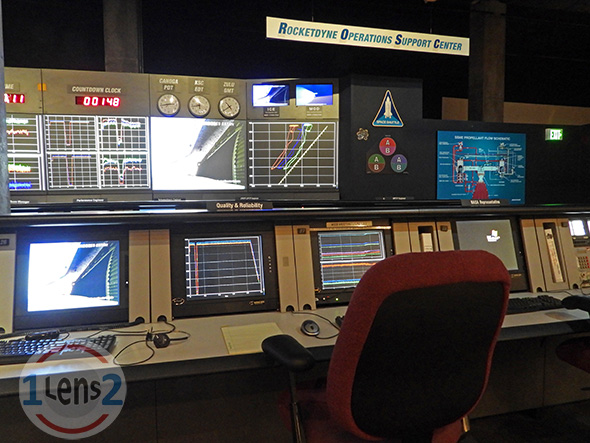 A mock-up of the Rocketdyne Operations Support Center. 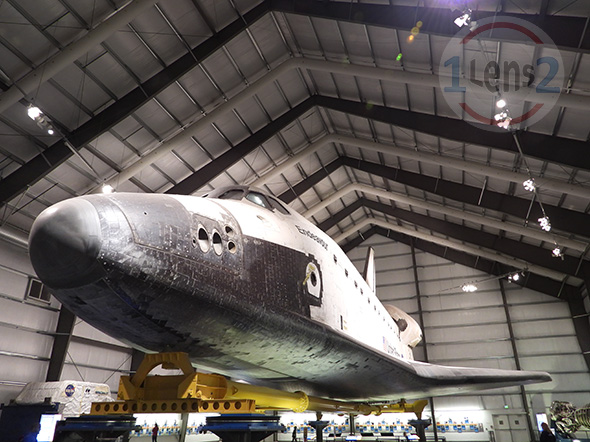 Seeing a real Space Shuttle right there in front of you can be a surprisingly awe inspiring experience, especially if you love science and technology, and even more so if you were around when the shuttles were the coolest things on and off the Earth. When I was a kid, I read anything I could find about the space shuttle and watched every launch and landing that occurred when I wasn't in school.

One of the things that my parents did that made them the coolest parents in the world was to let me stay home from school for the second launch of Columbia so I could watch it live on TV. I moved the TVs together, setup my space shuttle model and watched the special news coverage all day. 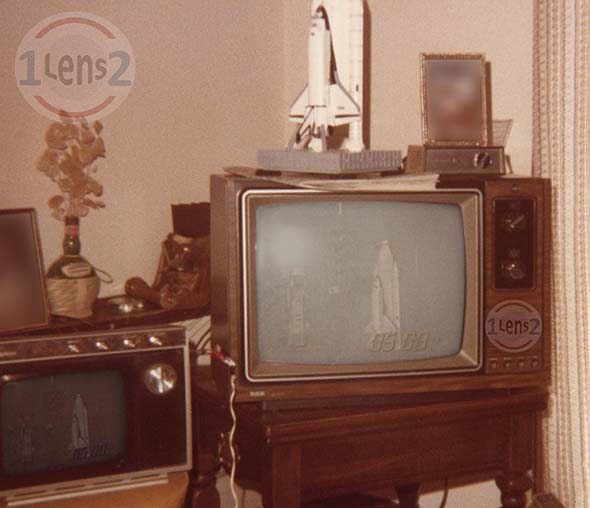 One of the great things about the Space Shuttle Endeavour display at the California Science Center is that it was not cleaned and shined after its last mission. You're seeing the spacecraft pretty much as it looked when it landed at Kennedy Space Center on its final mission on June 1, 2011. As you walk around and under Endeavour, you can see all of the wear, stains and damage that Endeavour withstood to get into and out of space. 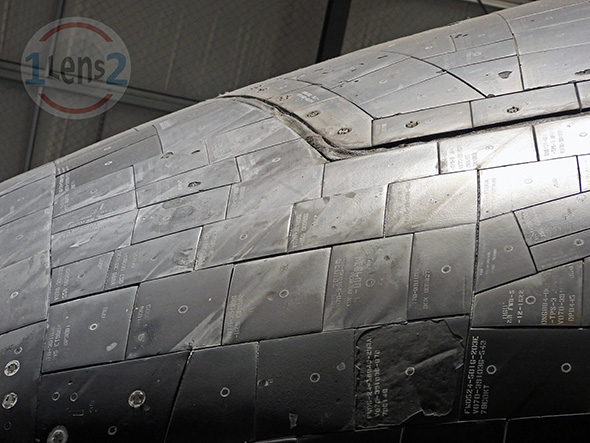 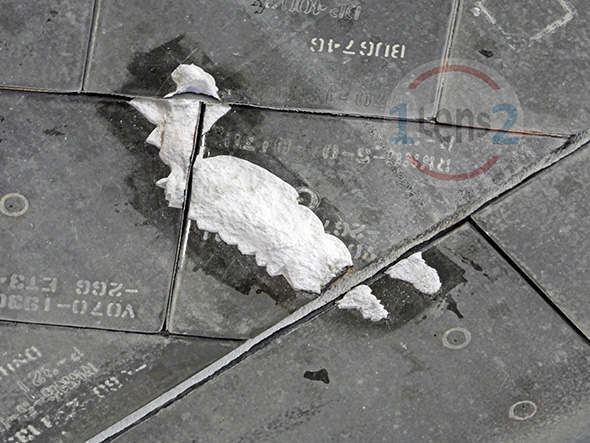 When I was at the science Center's Oschin Pavilion that day, I was shooting with my Nikon COOLPIX P1000 super zoom camera, so I was able to get some real close-up shots of Endeavour. With the P1000, you can practically see every square centimeter of the spacecraft. The following pictures zoom in from a focal length of 24mm to a focal length of 3000mm (35mm equivalent) allowing us to get close up look at the details of the launch umbilical panel at the rear of the orbiter. 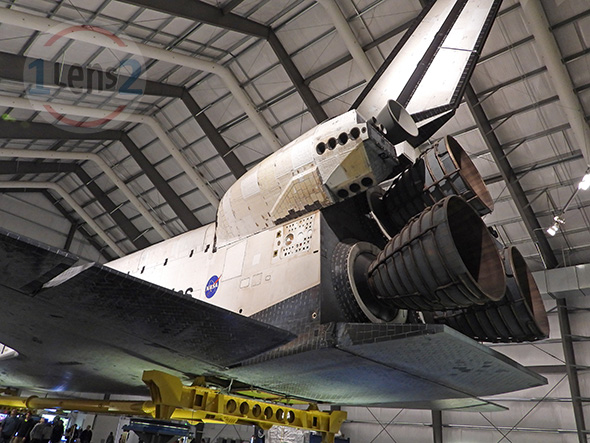 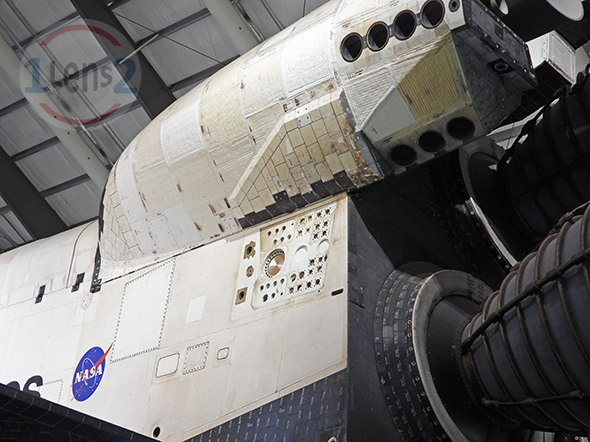 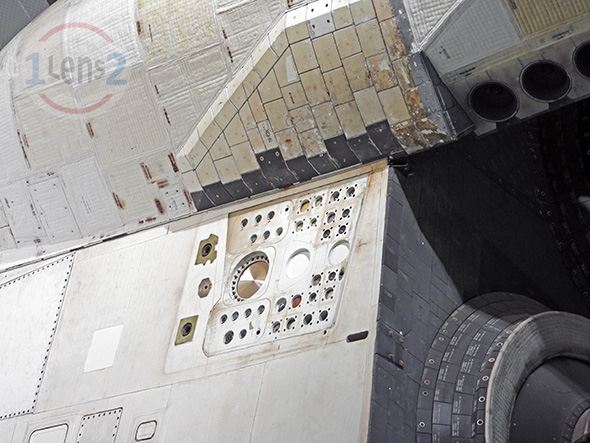 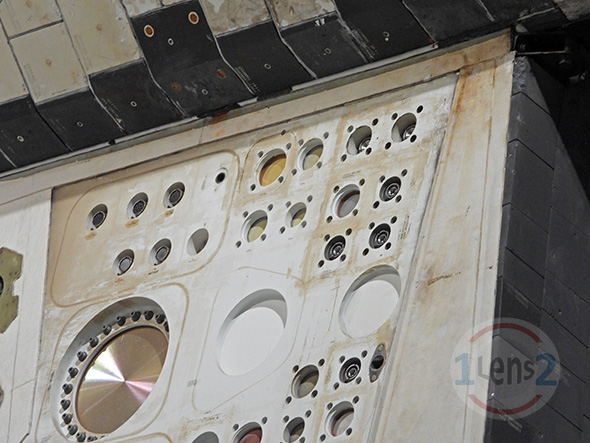 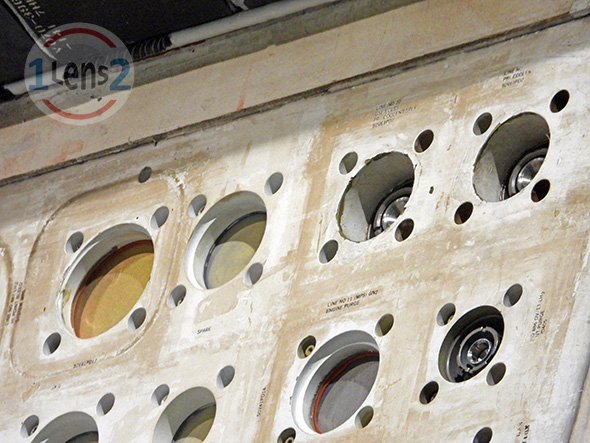 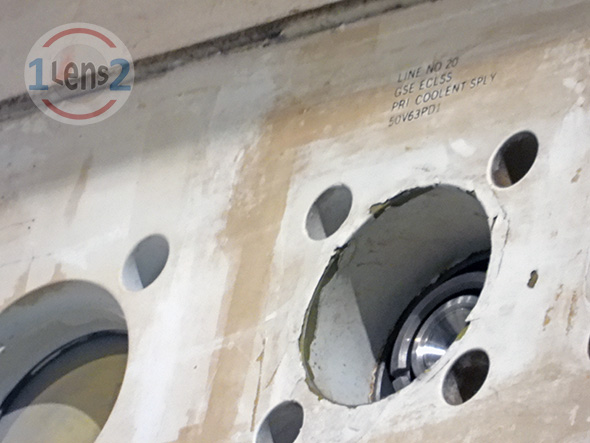 And here's an interesting observation that reminds us that Endeavour is on display in California. The mounts on the orbiter body that were used to attach it to the external tank are now used to anchor it to the ground. As you can see in the picture below, the orbiter is actually sitting on top of three giant rubber bushings that will absorb the energy of an earthquake. OK, that might not be the most interesting thing in the Oschin pavilion, but things like that always seem to catch my attention while I'm out exploring. Squirrel! 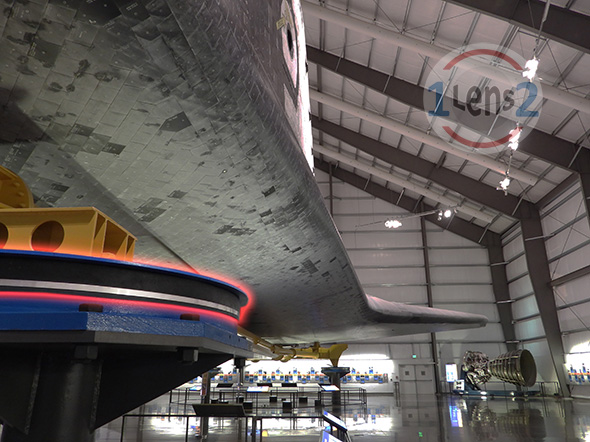 Information about all 25 of Endeavour's missions is posted in chronological order around the perimeter of the Samuel Oschin pavilion. As you walk clockwise around the pavilion, you can read and look at pictures to learn about the missions and important milestones in Endeavour's service life. 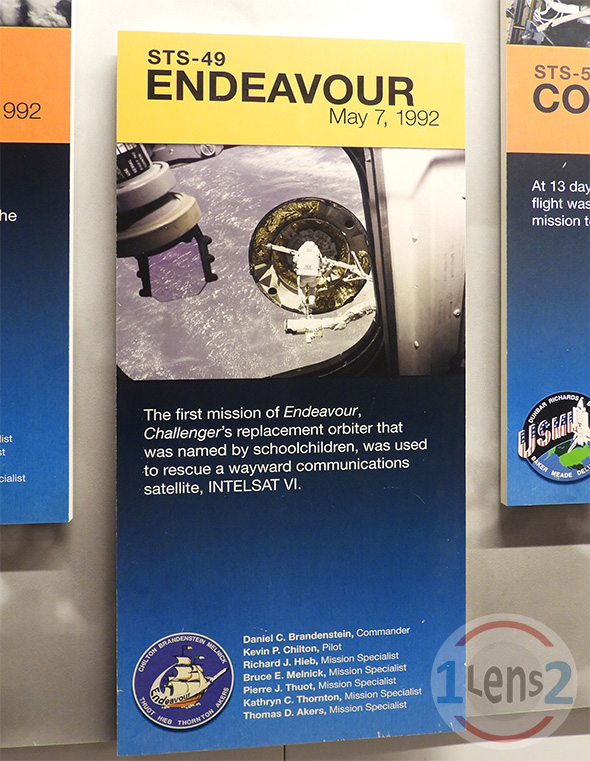 One of the information placards of Endeavor's history.

A space shuttle main engine (which would have been attached to the rear of the orbiter) is also on display. 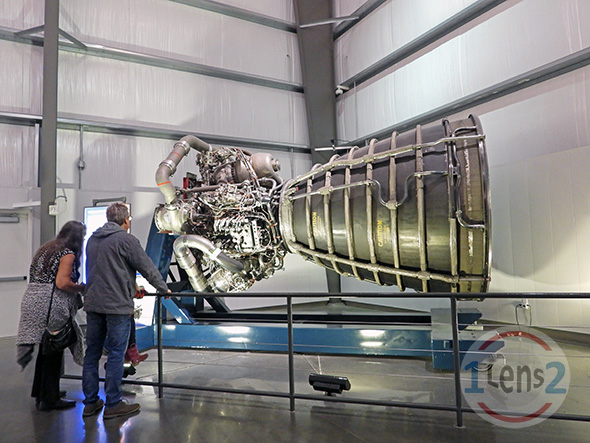 And not many people know this, but every once in a while, late at night when all the visitors are gone, the science center fires up the space shuttle's engines! 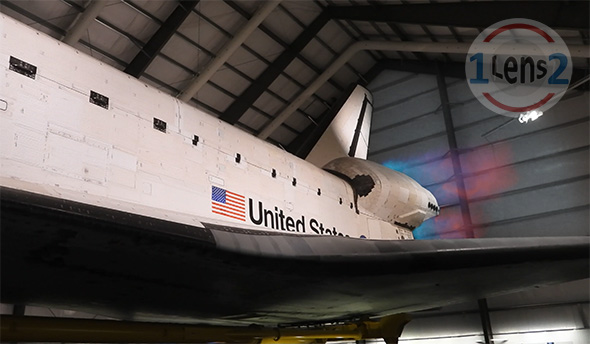 If the Oschin Pavilion fired up Endeavor's main engines.

OK, the folks at the California Science Center don't really run the space shuttle's main engines. I just made that up. But in case anyone from the science center is reading this article, I just want to say that lighting up those giant engines would be freaking awesome to see so I am officially requesting that you give it a try! You just need to figure out some way to not burn down the Oschin Pavilion. And the rest of the science center. Because, you know, that would be bad.

Speaking of giant things, the CA Science Center also has a space shuttle external fuel tank. When in launch orientation, the tank is taller than the Statue of Liberty. It held 535,000 gallons of fuel and weighed 1.6 million pounds when it was full. The tank is orange which is the color of the foam insulation that was sprayed on the exterior to keep the liquid hydrogen and liquid oxygen cold. 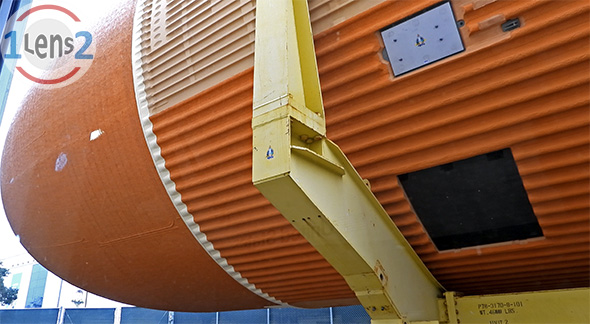 The shuttle external tank outside the Oschin Pavilion.

On the first few space shuttle missions, the external tank was painted white to match the color of the orbiter and the solid rocket boosters. After that, they stopped painting it to avoid the added weight of the paint, which increased the weight of the payload that the shuttle could carry. I can appreciate the lower weight benefit, but I have to say that the shuttle looked better when everything was the same color.

The external tank is so huge that it doesn't fit inside the Oschin Pavilion. It had to be placed outside. It's so hugely huge that you can't see much of it when you look out the glass door of the pavilion (see the picture above). To get a good view, you need to back away from it so I had to use Google Maps to get a bird's eye view. 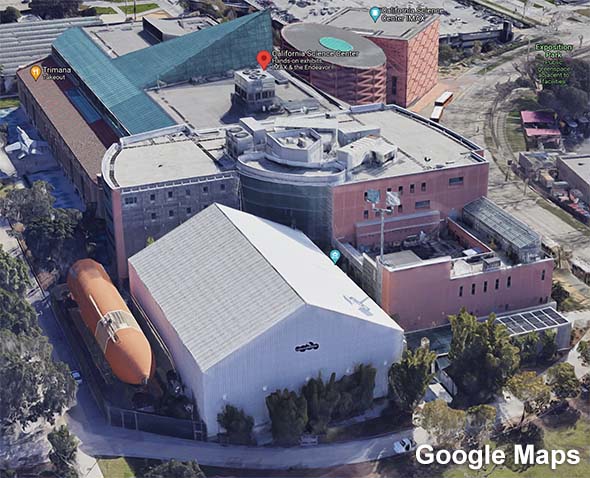 A bird's eye view of the external tank next to the pavilion.

If you're going to build a pavilion to house a space shuttle then why not build it big enough to include the external tank, you ask? The answer is that Oschin Pavilion is a temporary structure. The California Science Center is raising money to build a bigger building to house Endeavour in its full launch configuration as seen in the model below. I will definitely be back to see that! 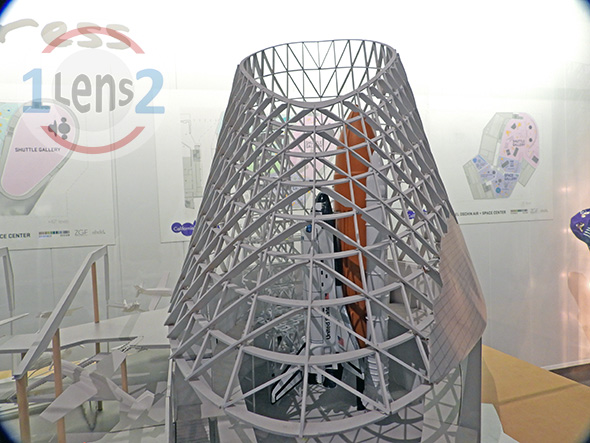 A model of the future Endeavour exhibit building.

If you enjoyed reading this article then you'll want to check out the accompanying video below. It shows samples of the California Science Center's Air and Space exhibit, the Endeavour artifacts on display and, of course, the Oschin Pavilion with great shots of the Space Shuttle Endeavour. You'll also see a video clip of what it might look like if the science center really did fire-up the space shuttle's main engines inside the pavilion! Just click on the picture below to watch the video on YouTube. While you watching the video, I hope that you'll consider "liking" it, sharing it with your friends and family and perhaps even subscribing to my channel. 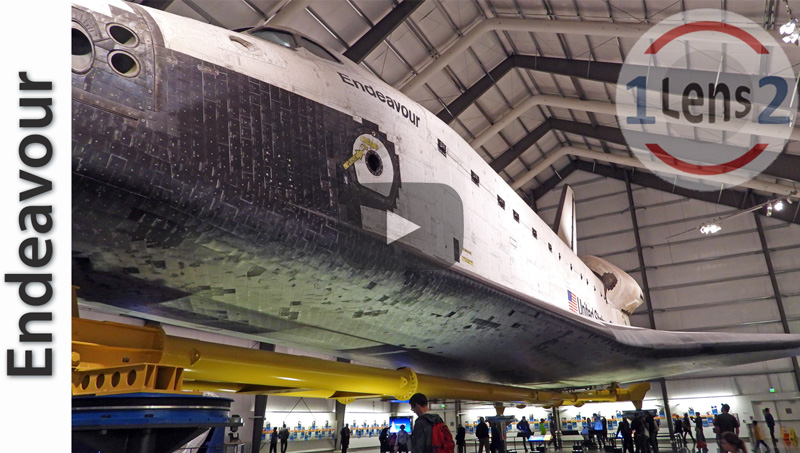 Thanks for reading this article and watching the video! There's plenty more on the website to enjoy! Some of the related articles and videos are listed below. Or browse through all of the articles here.