If you're a plane spotter in the Los Angeles area or you're planning a trip to the area, then you should consider visiting Clutter's Park near Los Angeles International Airport (LAX). There are often fellow airplane enthusiasts at the park so you can share your passion while you're there. Clutter's park is also a great place to take the kids to see some airplanes. I've been to Clutter's park a few times, so I'll try to provide some information about the plane spotting experience in this article.

When I visit the park, I bring my Nikon COOLPIX P1000 with me, so I'll also show some of the pictures that I've taken. There's a link at the end of this article to a video that shows the Clutter's Park plane spotting experience.

Clutter's Park is located alongside East Imperial Avenue in El Segundo, CA. The park's address is 423 E. Imperial Avenue. Note that the park is on East Imperial Way, not East Imperial Highway. The two roads run parallel to each other. Clutter's Park is an amazing place to watch planes, but it's actually pretty small. While it is technically a park, don't expect wide open spaces and park amenities like restrooms. It's basically just a stretch of sidewalk about 640 feet (195 meters) long with a view of the airport. Perhaps the motto for Clutter's Park should be "good things come in small packages"!

There are some benches in the center section of the park, but it can get busy at times, so you might have to stand while watching the planes. Perhaps bring a folding chair with you just in case. There's a similar situation with parking. There is no parking lot for the park. Rather, there is parallel parking along East Imperial Avenue. During busy times, you might have to park a little further away from the park on East Imperial Way and walk to the park, although I can't imagine that you would have to walk more than a minute or two. If you'd like to avoid walking and standing, I recommend that you check out the "Busy Times" section of the Clutter Park listing on Google Maps. On the bright side, the parking is free! 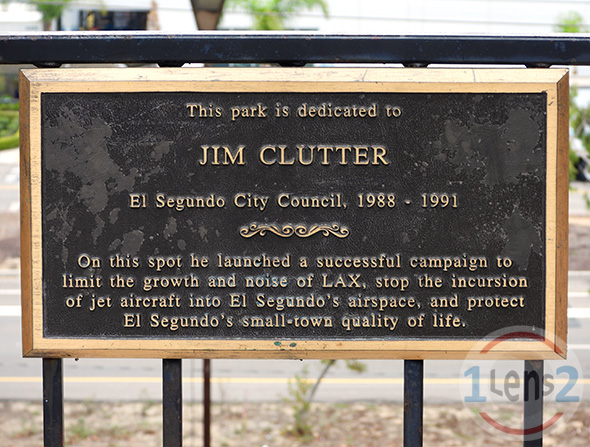 The park is dedicated to Jim Clutter.

By the way, there's a dog park adjacent to Clutter's park. That might come in handy if you want to watch planes and your companion wants to spend some quality time with the dog. Just park between the two and enjoy both... or split up!

Why is the view at Clutter's Park so amazing? The main reason is that the park is located about 1,200 feet (366 meters) from the edge of the closest runway which is 7R/25L. And the taxiway to the south of the runway is less than 700 feet (213 meters) from the park. Another reason why the view is so good is that the park is at a slightly higher elevation than the airport, so you get can see over most of the buildings between the park and the runway.

OK, it's close to the airport, but can you get good views of airplanes? Heck yea, this place is awesome! You'll have some great views of planes taking off and taxiing around the south side of the airport, and you'll also be able to see aircraft operations around the terminals. The picture below is a wide-angle view of the southeastern portion of LAX from Clutter's Park.

You can click on many of the pictures below to see a larger view. Although the bigger view will only be noticeable if you're reading this article on a device with a larger screen, like a tablet, computer or a TV. Probably not so much on a phone. 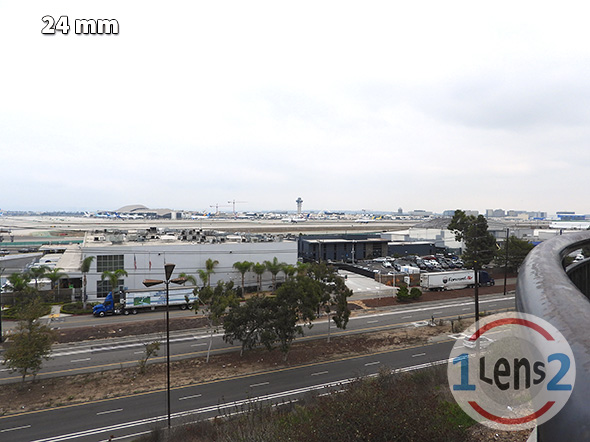 If you like watching planes taking off then Clutter's park is the place for you. The wind is almost always coming inland from the ocean and planes take off into the wind, so planes at LAX usually take off from the east side of the airport heading west towards the ocean. Clutter's park is near the west end of the runway, so the planes are at speed and getting into the air just before they are in front of the park. The other end of the runway is pretty far away from the park, so you'll need binoculars or a camera with a pretty good zoom to get a good view of planes landing on 25 Left. 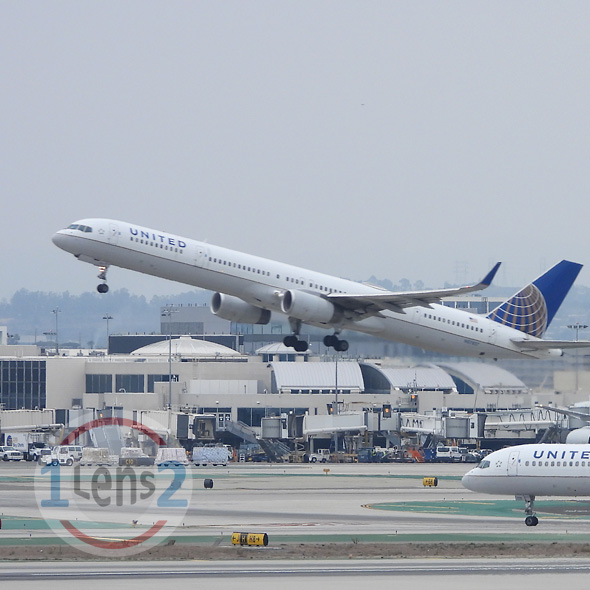 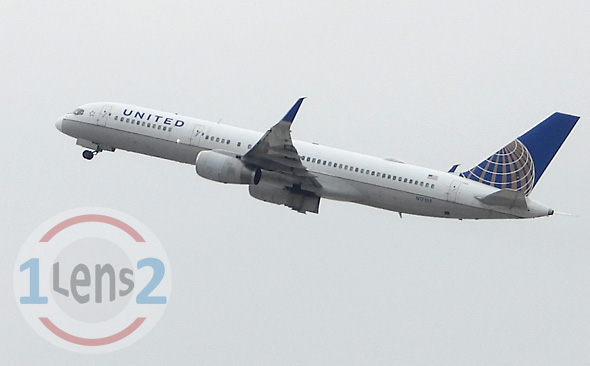 You don't need a camera with a big telephoto lens to watch planes here, but if your camera can zoom in then you can get some great close-up shots of the action on the runway and the taxiways. Here's a series of pictures at increasing zoom levels. Find the focal length (35mm equivalent) that matches your camera to see how close you can get to the action. Note that I took these pictures on a cloudy and relatively dark day. 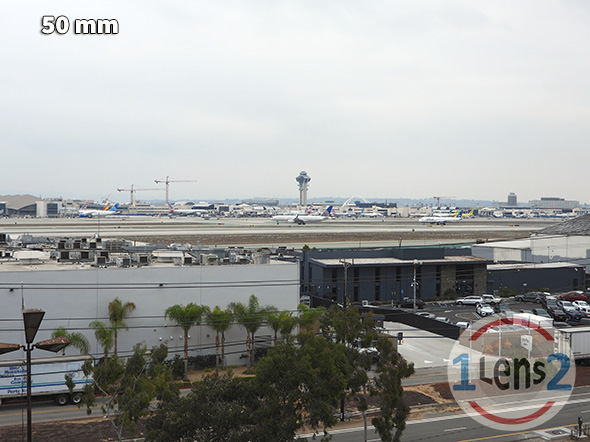 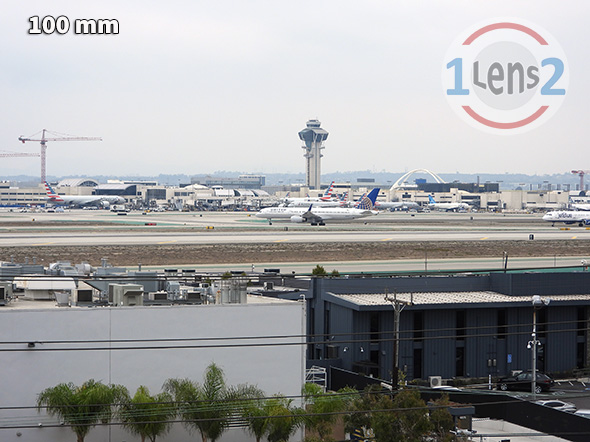 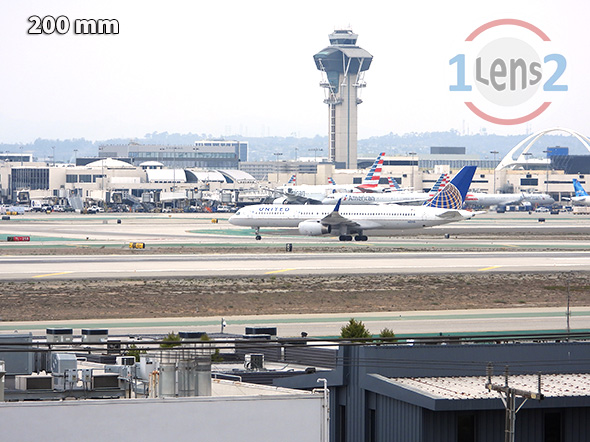 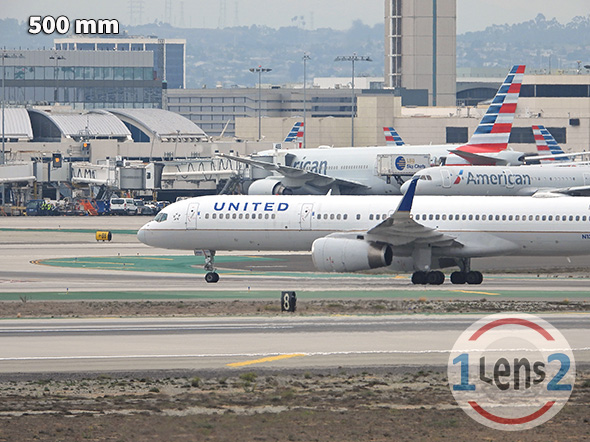 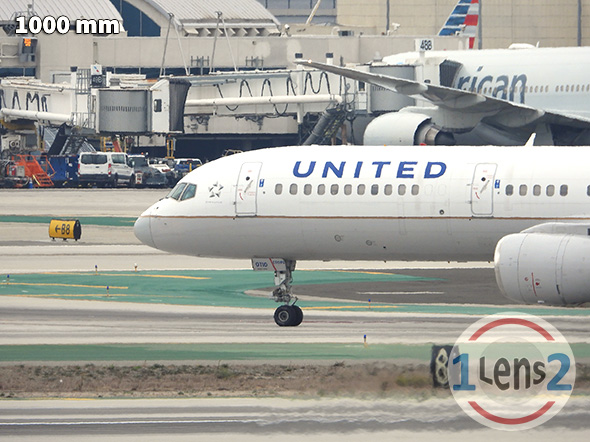 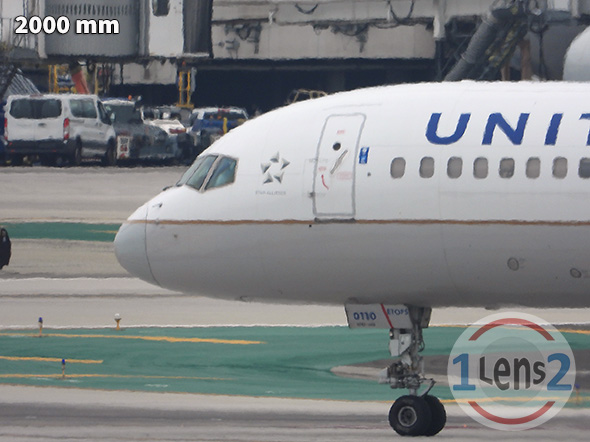 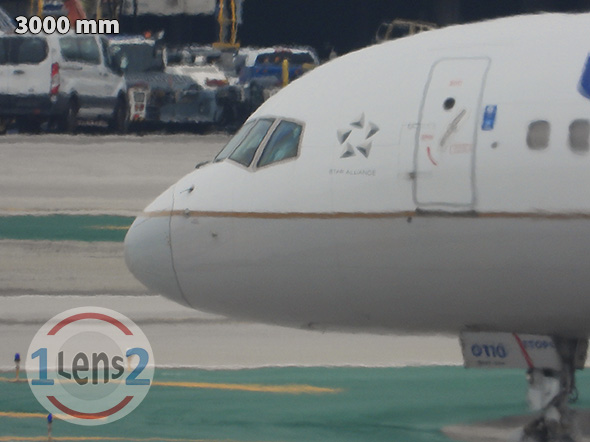 Los Angeles International Airport is a popular destination for airlines from all over the world, so you might see some interesting liveries from Cutter's Park. Liveries are what plane spotters call the design painted on the outside of the aircraft. Most commercial airplanes have the name of the company painted on the side of the plane, but some airplanes have special designs. Here are a couple of interesting liveries that I saw at LAX the last time I was at the park.

The New Zealand livery at LAX

The Alaska Airlines - Spirit of the Islands livery.

I like to see the liveries, but my favorite thing about LAX is that a lot of Boeing 747s fly into and out of the airport. A lot of plane spotters have a special place in their heart of the 747 which is also known as the "Queen of the Skies". Most of the 747s use the runway closest to Clutter's Park, so seeing - and hearing - a giant 747 with those four huge engines take off less than 1,200 feet (366 meters) from you is spectacular! The 747s also land on that runway and when they "go long" (that is, they use the far end of the runway to slow down), they will taxi by the park less than 700 feet (213 meters) away providing a great broadside view of this magnificent plane. 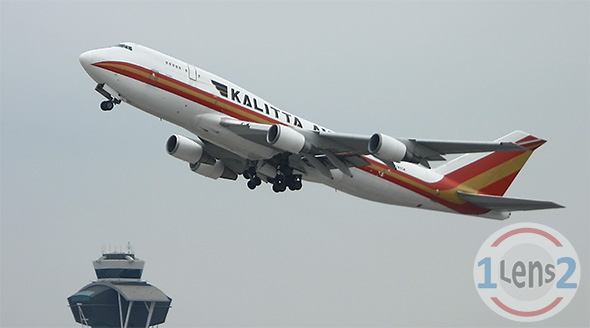 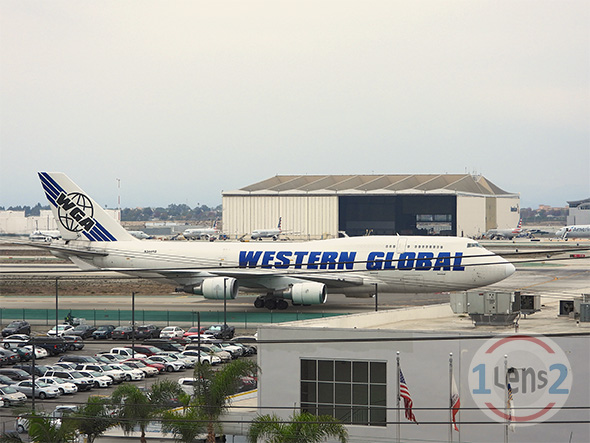 Unfortunately, the other giant aircraft, the Airbus 380, uses the runway on the north side of the airport, so there's not such a good view of A380s from Clutter's Park.

If you have binoculars or a camera with a large telephoto lens, then you can also see if there's anything interesting going on in the American Airlines maintenance hangar on the other side of the runway. Here are some pictures that I took with my Nikon P1000 super-zoom camera. Nothing interesting was happening in the hangar when I took these photos, but you never know when an interesting aircraft will be in the shop for an oil change and a tune up! 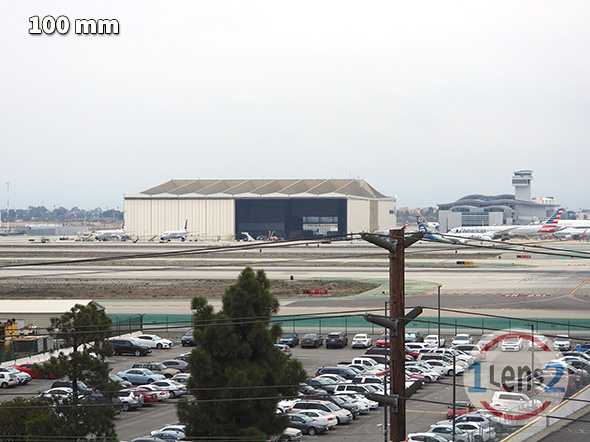 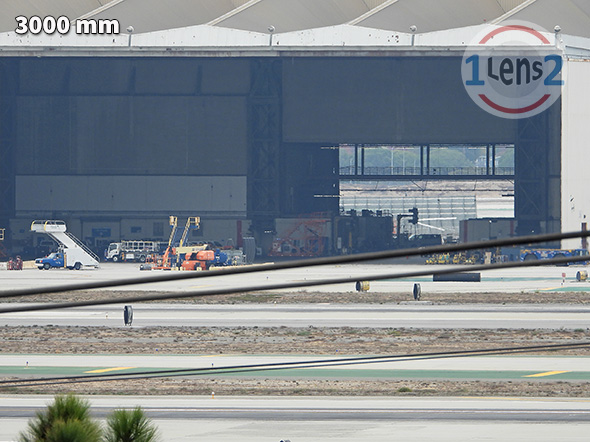 There is no doubt that Clutter's Park is a great place to watch aircraft operations at Los Angeles International Airport. But what if you want to see all of the airplane action, but cannot get to Clutter's Park? No problem! Head over to YouTube and look for the "Airline Videos" channel. When I wrote this article, Airline Videos was usually live streaming from Clutter's Park about once a week. And all of the past shows are stored on YouTube for you to watch at any time. 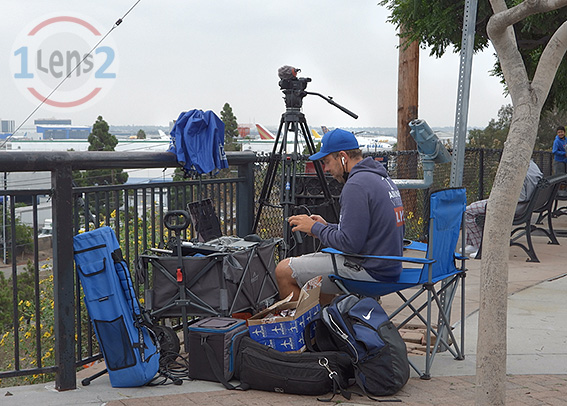 I made a video of the Clutter's Park experience! Check it out if you want to see what it's like to be at the park and to see the airplanes in action. I was able to capture a couple of 747s taking off right in front of the park. In the video, I also look into the rumor that there is dragon living near the airport. Wait - what? If you enjoy the video then you can let me know by liking the video on YouTube or maybe even leaving a comment! I'd love to hear from you! 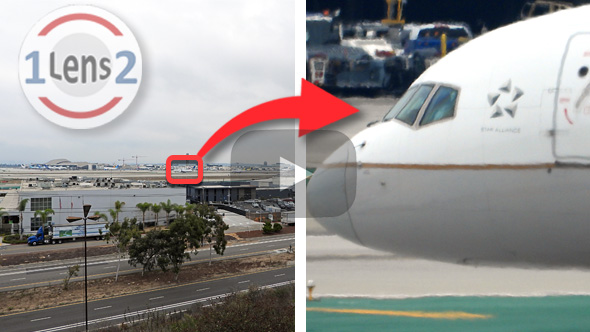