This video demonstrates the photo and video capabilities of the Olympus Tough TG-850 camera. The TG-850 is a weather resistant camera with a 5X optical zoom and a flip view screen that can be used for traditional photography or for taking selfie pictures and videos. The versatility of the flip screen is great for making vlogs. The review covers most of the camera's functions, including:

The Tough TG-850 has a number of in camera photo effects such as dramatic tone, diorama, pop art, soft focus, pale color, pin hole and grainy film and you'll see samples of them all of in the video below. The pictures and video from the Olympus camera were shot at a variety of locations in Arizona and California, from a car show to Disneyland Park. In keeping with the desire to keep things interesting, one of the video tests shows a cricket having lunch, which, it turns out, is actually kind of creepy. Yea, didn't think that one through :) 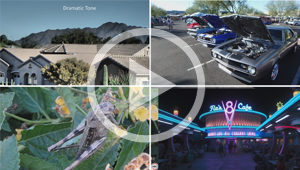 The video and images in the review weren't touched-up or "Photoshopped" in any way. They were loaded into the video editing application as-is. Please note that the TG-850 camera used in this video was purchased in 2014. Later models of the camera may function differently.

One Lens Two is not affiliated with the Olympus company. This article and the video are One Lens Two productions. All rights reserved. This material may not be published, broadcast, rewritten or redistributed in whole or in part without the expressed written authorization from One Lens Two.