50X Zooming for Photos with the FinePix S9400W

Episode #2 of the Fujifilm FinePix camera series shows just how close you can get to a subject with a 50X zoom. This video shows a series of photographs that switch from fully zoomed out to fully zoomed in. Quickly seeing opposite ends of the zoom range really drives home how close this camera lets you get.

As is demonstrated by the shots in the video at Disney's California Adventure theme park, it almost doesn't matter how far away the subject is - just zoom in until it's framed. In fact, you may actually find that the full 50X zoom brings you in too close as can be seen in some of the shots in the video at the car show. Zooming any closer would seemingly show the molecules in the cars' paint!

Here's a fun way to watch this video. While the "zoomed out" picture is displayed with the red circle highlighting the focal point, try to visualize what you'll be able to see in the following "zoomed in" picture. You'll probably be amazed when the zoomed in photo is revealed. Well... I was! For me, the picture comparisons of the zoom range are more striking than the video comparisons in the other episodes of the S9400W series.

Note that the pictures were not altered or Photoshopped in any way. They were assembled as-is into the video using a video editor. Also, note that the S9400W used in this video was purchased in 2014. Later models of the camera may function differently. 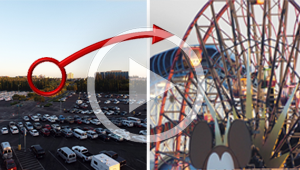 This is the second episode in a series of videos on the FujiFilm FinePix S9400W. Throughout the series, almost every photo and video function of the camera is demonstrated, so be sure to check out the other episodes listed below!

One Lens Two is not affiliated with the Fujifilm company and was not compensated in any way for this article or the video.