In this episode of One Lens Two's series on the Fujifilm FinePix S9400W 50X zoom camera, the focus will be on the many photo effects, settings and functions that are built into the camera. Watch the video below to see examples of the following:

The photo filters shown include black and white, toy camera (pin hole), miniature (diorama), pop color, high key, low key, dynamic tone, fish eye, soft focus, cross screen (star) and a few partial color options. Of course, the FinePix S9400W is known for its ultra zoom and the final example in the video which showcases the zoom in a sea of brightly colored bicycles is a must see.

The demonstration video below shows you the effects, settings and functions applied to sample pictures so you can see the results for yourself. There are lots of different locations and scenes from California to Arizona to New Jersey to keep things interesting. 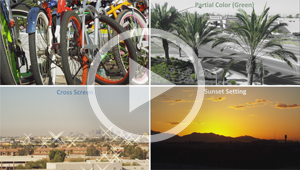 The pictures in the video were not altered or Photoshopped in any way. They were assembled as-is into the final product using a video editor. Also, note that the S9400W used in this video was purchased in 2014. Later models of the camera may function differently.

This is the third episode in a series of videos on the FujiFilm FinePix S9400W. Throughout the series, almost every photo and video function of the camera is demonstrated, so be sure to check out the other episodes by clicking on the links below!

One Lens Two is not affiliated with the Fujifilm company. This article and the video are One Lens Two productions. All rights reserved. This material may not be published, broadcast, rewritten or redistributed in whole or in part without the expressed written authorization from One Lens Two.