Filming or Playback - When to Apply Slow Motion?

A number of cameras have the ability to film in slow motion. They do this by recording at a high frame rate so that the scene looks like it's in slow motion when the video is played back at the regular frame rate. The problem with slow-motion video for many cameras, including the Fujifilm FinePix S9400W, is that the resolution of the video decreases as the frame rate increases.

For more information about recording in slow motion, check out One Lens Two's article and video on the S9400W's slow-motion options. 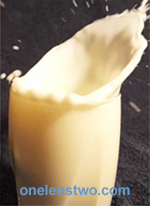 Given the impact of a higher frame rate on video resolution, you might be tempted to record at the regular frame rate and then play the video back at a slower speed. You can easily do this if you have access to a video editing application like Adobe Premiere. You could also upload your video to YouTube and change the playback speed in the options section while you're watching it. Some video playback applications can play back video at different speeds.

Unfortunately, slowing down the playback of a video that was filmed at regular speed will likely produce motion blur. And that kind of defeats the whole purpose of filming in slow motion. Most people use slow motion to see the details of something moving very fast. It's kind of hard to do that when the motion is blurred.

So what's a slow-motion videographer to do? If the action that you're filming is moving relatively slowly and you're going for a certain dramatic look then filming at regular speed and slowing down the playback may meet your needs. But if your subject is moving quickly then you'll need to increase your recording frame rate.

It's a Balancing Act

The trick is to find the right balance between the amount of video resolution reduction and the level of motion blur. That is, find the right mix of increased recording frame rate and decreased playback frame rate. 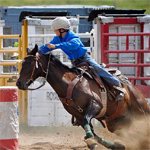 For example, if you need to see the action in 1/4 real-time speed, then double the regular recording frame rate and then set the playback frame rate of that slow-motion video to half the regular frame rate. The regular frame rate of the FinePix S9400W camera is 60 frames per second (fps). To slow the action down to 1/4 real-time speed, set the recording speed to 120 fps and set the playback speed to 50%. This way, neither the video resolution nor the motion blur takes the full hit of the speed change.

If you've tried different combinations of recording and playback frame rates and are still not happy with the results, there's one last option that you can try. You could simply ask your subject to move really, really slowly :) Hey, it works in cartoons!

See it In Action

The video below shows examples of using different recording and playback frame rates on a Fujifilm FinePix S9400W camera. Hopefully the resulting effects on video resolution and motion blur will help you decide how to best tackle your next slow-motion video! 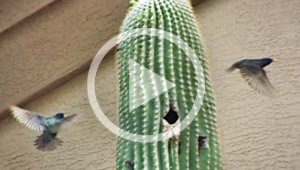 The S9400W used in this video was purchased in 2014. Later models of the camera may function differently.

This is the eighth episode in a series of videos on the Fujifilm FinePix S9400W. Throughout the series, almost every photo and video function of the camera is demonstrated, so be sure to check out the other episodes by clicking on the links below!

One Lens Two is not affiliated with the Fujifilm company and was not compensated in any way for producing this article or the video. Please direct all casting inquiries for the bird actors in this video to the Bird Actors Guild of Arizona. This is an One Lens Two production. All rights reserved. This material may not be published, broadcast, rewritten or redistributed in whole or in part without the expressed written authorization from One Lens Two.