This video is a short time-lapse of a summer shower that blew through the Phoenix Arizona area. It was made to test the interval shooting mode on an Olympus Tough TG-850 still camera. The interval was set at one picture every ten seconds. As is often the case with summer storms in the Phoenix area, the wind kicked up some dust that fills the video frame and reduces the contrast. The bird walking across the bottom of the picture doesn't seem to mind. Did you notice the bird?

When you take pictures using the interval function, they will automatically play back as a movie in the camera. But on a computer, you'll have to assemble the pictures into a movie using a video editor like I did for this video. Note that the ending shots of the dust storm were made with a different camera. 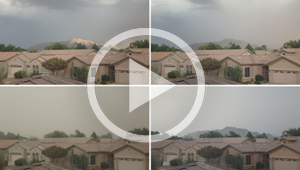 The video and images in the time-lapse weren't touched-up or "Photoshopped" in any way. They were loaded into the video editing application as-is. Please note that the TG-850 camera used in this video was purchased in 2014. Later models of the camera may function differently.

One Lens Two is not affiliated with the Olympus company. This article and the video are One Lens Two productions. All rights reserved. This material may not be published, broadcast, rewritten or redistributed in whole or in part without the expressed written authorization from One Lens Two.