Zooming in on the Stratosphere Tower

While visiting Las Vegas, NV, I took some pictures and video of the Stratosphere Tower from the Gold Coast Hotel. According to a point to point measurement in Google Maps, the Stratosphere Tower is 2.95 miles away from the camera's location at the Gold Coast Hotel, so I had to zoom in quite a bit to get a great view. In this article, I'll talk about the pictures and the video that I took using the Nikon COOLPIX P900 ultrazoom camera. 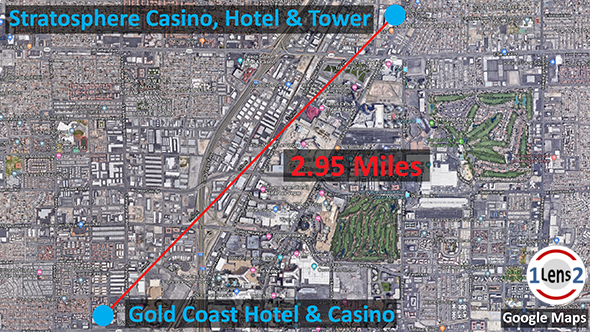 By the way, here's how you can measure the distance between two locations on Google Maps on a PC:

Pictures of the Tower

Even at 1,149 feet (350 meters) tall, a picture of the Stratosphere Tower taken from almost three miles away is not going to be very detailed. This is abundantly clear in the picture below. 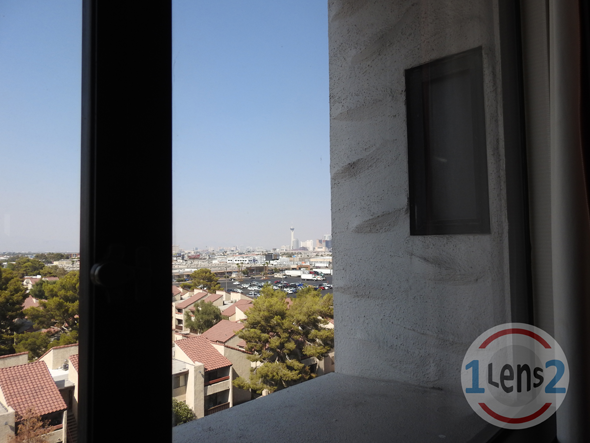 This picture was taken at the P900's wide angle setting which is equivalent of 24mm lens on a 35mm camera. If I were using a camera with a minimal zoom lens or without a zoom at all then I would look at this picture and groan, realizing that to get a good picture I'd have to get in the car, drive closer to the tower and then and drive back. That would take an hour or more of my precious vacation time.

But since I had a camera with a good zoom, I simply zoomed in closer to the tower. I took the next picture at about 30x or the equivalent of a 720mm lens on a 35mm camera: 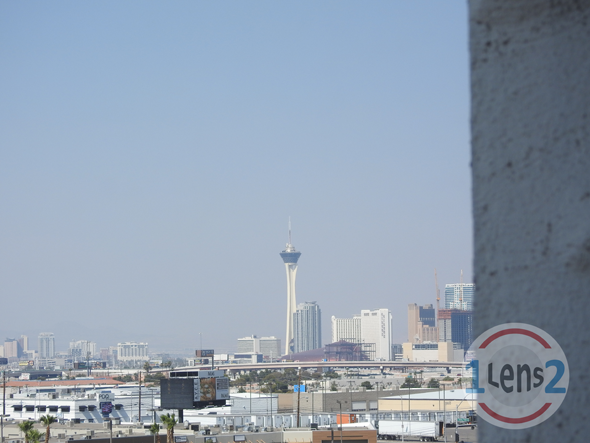 OK, I could have moved the camera so that the side of the hotel isn't in the shot and the tower is better placed in the picture, but you'll see where I'm going with this shortly. At about 30x zoom you can clearly see the tower and some of its architecture, but if you're like me then you want to get closer. If 30x was the end of the zoom range on the camera that I was using then I'd be heading out to the car and driving to the tower.

At this point, you might be thinking that other than the time required, driving to the tower for a closer shot might not be a bad idea. One thing to keep in mind is that the Stratosphere Tower is the tallest freestanding observation tower in the United States. If I were to get closer to this really tall structure then my position changes from being beside the structure to being under the structure. And viewing something from the bottom makes it hard to see the top. I don't know about you, but I kind of want to see the stuff on top of the tower. 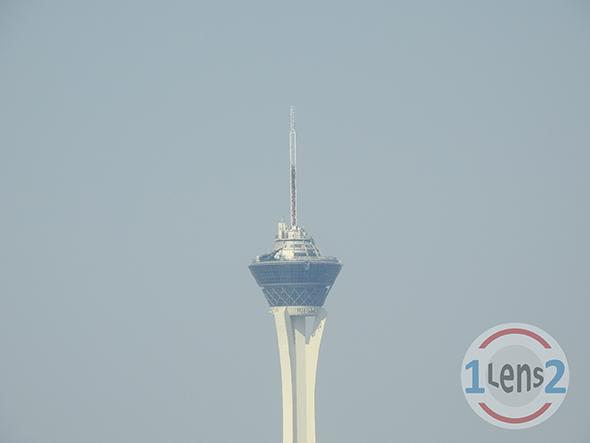 Wow, compared to the 24mm equivalent shot, this is a great view of the top of the Stratosphere tower. You can see the detail of the architecture and some of the thrill rides on the top of the structure are starting to come into view. You can also start to see that the "pod" on top of the tower is topped off with a dome-like roof that looks like something you'd see in a science fiction movie from the 1950s. That looks strange to me considering that the tower was built in the early 1990s.

If all I had with me on the day of this shoot was my Fujifilm FinePix S9400W with a 60x zoom (1,200mm equivalent) than we'd be done. But I had my Nikon COOLPIX P900 with me that day so we are most certainly not done. I really want to see those thrill rides. And I'm not sure why, but I have this strange attraction to the retro-future roof on top of the pod that I'd like to get a better look at.

The picture below was taken at the maximum optical zoom for the P900 which is 83x or the equivalent of a 2,000mm lens on a 35mm camera: 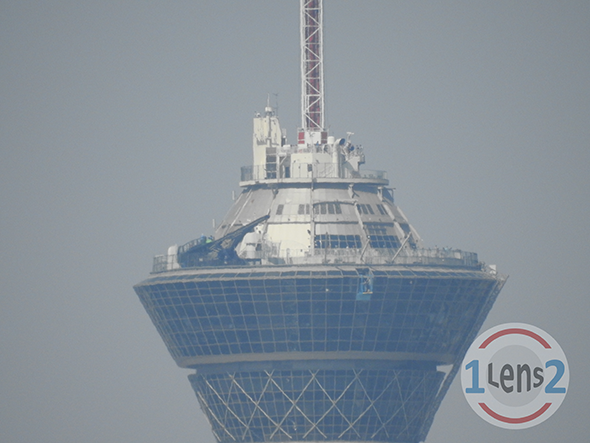 OK, that dome is some serious retro-future awesomeness. I'm waiting for a giant octopus from the 1950s to slither up the Stratosphere Tower and start eating the tourists in the pod! And the thrill ride on the top of the tower to the left looks like a giant space cannon ready to blow attacking aliens in their flying saucers out of the sky! But I digress...

The thrill rides show more detail now and we can actually see people on the top of the tower. That's kind of amazing because the people on the tower are almost 3 miles away from the camera! Let's take a moment to put that in perspective. If you were driving your car on the highway at sixty miles per hour, you would have to drive for about three minutes to cover the ground between the camera and the people in the picture.

The picture straight out of the camera is good, but here's a version of the picture that I tweaked a little in Photoshop by making some small adjustments to the gamma and white balance. I didn't have my tripod with me while I was in Vegas that weekend and the Nikon P900 camera was propped up on my backpack to get these shots. Any motion of the camera at this much zoom can cause some motion blur so I applied the motion blur correction feature in Photoshop on the picture.

I've also pointed out the Stratosphere Tower thrill rides in this picture. 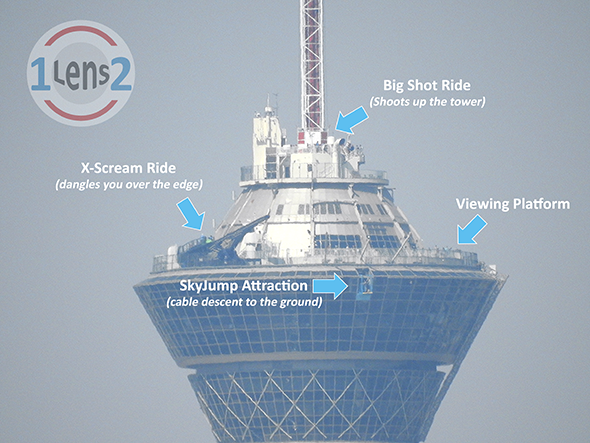 The Big Shot ride shoots you up the antenna on the tower. You can see people waiting to get on the Big Shot. The X-Scream ride extends you 27 feet over the edge of the tower. It appears to be in the passenger loading position in the picture. You can jump off the SkyJump platform and descend 829 feet to the ground. You can see someone in the picture getting ready to make the jump. While not a thrill ride, you can also see people standing on the viewing platform / observation deck. The Insanity ride which swings you 64 feet over the edge of the tower and spins you around, is also on the top of the tower, but it's not visible in the picture. 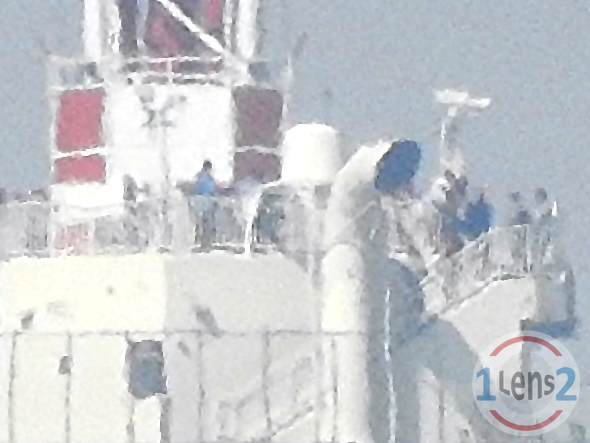 Now is a good time to talk about why the picture isn't perhaps the sharpest picture that you've ever seen. The main reason is that we are looking through almost three miles of atmosphere. And because the pictures were taken later in the day (it was about 3:30PM), the air is not as clear as it is, say, first thing in the morning. It was also over a hundred degrees Fahrenheit when I took these pictures in August, so there were a lot of heat waves in the atmosphere between the tower and the camera. One final contributing factor is that I was balancing the P900 on my backpack so there may be a little motion blur in the shot.

Here's the final look at the Stratosphere Tower, a side by side comparison of the 24mm equivalent shot with a cropped view of the 2000mm equivalent as described above.

In the video below, I discuss the pictures presented above and as well as a video clip of Nikon COOLPIX P900 zooming out from the Stratosphere Tower. Just a reminder that the picturess are 4608 x 3456 pixels ands the video clips are 1080 x 1920 pixels. What's nice about the video is that you can see the people on top of the tower moving around, which provides a different perspective of the scene.

There are two versions of the zoom in the video. The first version has been stabilized using Warp Stabilizer in Adobe After Effects. The second clip is without the stabilization. As I mentioned above, I didn't have my tripod with me in Vegas that weekend, so the P900 was propped up on my backpack for these clips and it was hard to keep it still while shooting the video. 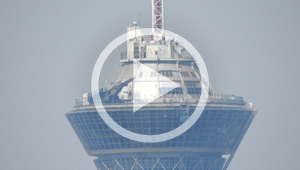 One Lens Two is not affiliated with the Stratosphere Tower/Hotel/Casino, the Gold Coast Hotel/Casino or Nikon, Inc. Copyright 2019 One Lens Two. All rights reserved. This material may not be published, broadcast, rewritten or redistributed in whole or in part without the expressed written authorization from One Lens Two.