Nikon COOLPIXP1000 zooms in on the Xcelerator roller coaster.

How close is 125x magnification? That's the maximum optical zoom on the Nikon COOLPIX P1000 ultra-zoom camera. Another way to ask the question is how close can you get to a subject with the P1000 at maximum zoom? I'll be answering that question over the next few months by zooming in with the P1000 on various subjects. Note that some of the pictures in this article are video captures, so picture quality varies.

Our subject today is the Xcelerator roller coaster tower at Knotts Berry Farm in Buena Park, California in the United States. Check out the video at the end of the article to see 125x zooming in action. 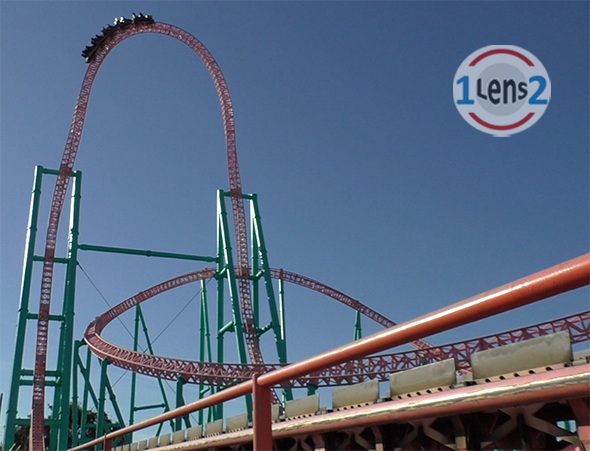 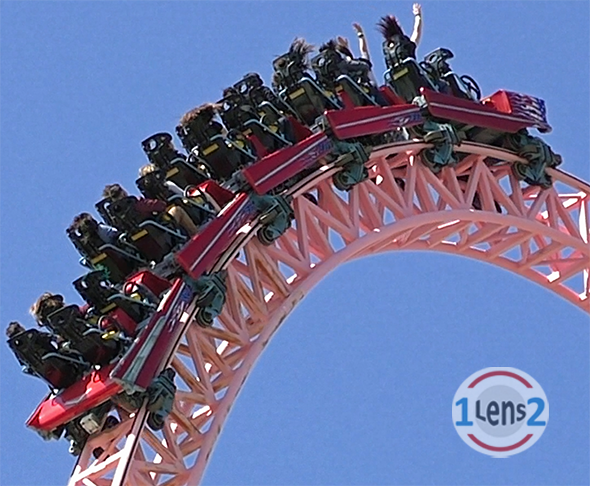 Up and over the top of the Xcelerator roller coaster tower.

To put the height of the roller coaster tower into perspective, here's a picture that I took from my Bell 206A Jet Ranger helicopter as I flew over Knotts Berry Farm. Look at how small those cars look way down at ground level! 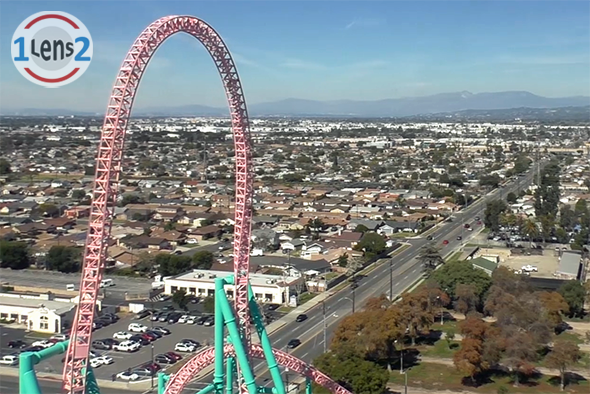 The Xcelerator reaches a height of 205 feet.

OK, I don't really have a Jet Ranger helicopter or any type of helicopter. That picture was actually taken from the Sky Cabin ride at the Knotts Berry Farm amusement park. 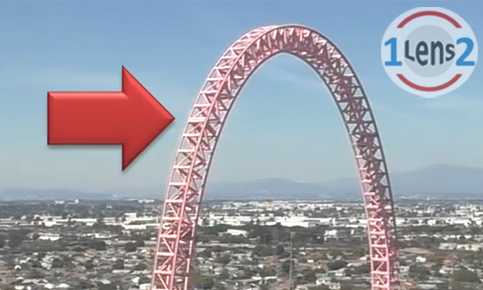 The location of the nut and bolt that we'll be zooming in on.

Right about now might be wondering why I didn't I zoom in on the roller coaster cars as they rocket up and over the 205 foot tower. That would have been pretty cool. Well, that was actually my original plan for this shoot. And in fact, I tried to zoom in on the train of roller coaster cars going over the top of the tower, but the Nikon P1000 can zoom in so close to the tower that the train of cars going by at 82 mph was just a blur. To see the train go by, I had to zoom out quite a bit. And where's the fun in not being at a ridiculous level of zooming? We needed something much, much smaller to zoom in on.

Before we look at the cool zooming pictures, we need to do some math because we need to know how far away our subject is from the camera. The nut and bolt look to be about 90% of the way up the track which puts them at about 185 feet in the air. When I took the pictures and the video, I was standing about 180 feet away from the base of the roller coaster tower (according to the measurement taken on Google maps).

Those two numbers are important because they form the legs of a right triangle. And the distance from the camera to the nut and bolt on the top of the tower is the hypotenuse of that right triangle. So we can use the Pythagorean Theorem to calculate that the line of sight distance between the camera and the nut and bolt on the tower is about 258 feet. That's about the distance from the ground to the twenty sixth floor of a tall building. 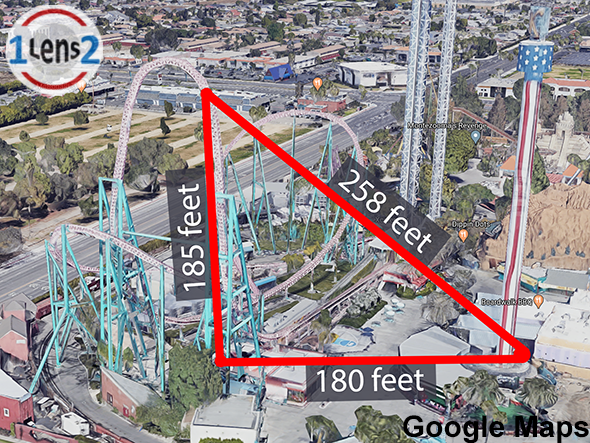 Calculating the line of sight distance.

OK, the math is over now.

The picture below, taken with the Nikon P1000, shows a similar set of nuts and bolts on a section of the roller coaster track that is much closer to the ground. Looking at the people riding the roller coaster, you can get a sense of how big the nuts and bolts are. If I had to guess, I'd say they that the nut is almost as large as your fist. Well actually, I should say that the nut is almost as big as my fist because I really don't know how big your fist is. Wait, you don't know how big my fist is either, so this is really not working out at all. Perhaps it's best to just look at the people in the picture to get a sense of how big the bolts and nuts are. Assume that they are normal sized people... with regular sized fists... I'm going to move on now... 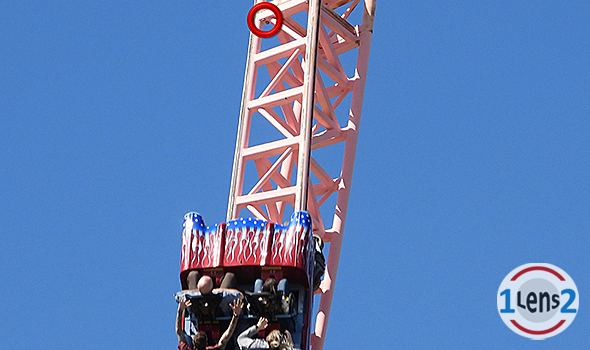 The first photograph of the tower shown below is all the way zoomed out. For the COOLPIX P1000, this is 24mm (35mm camera equivalent). Not surprisingly, at this magnification (or lack of it), there is no way that you can see the nut and bolt. In fact, you can't even tell that the track is made up of sections that are bolted together. 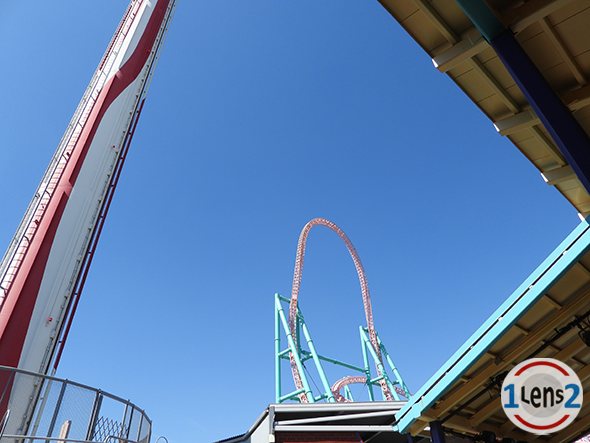 As we start to zoom in, and if you're reading this article on a computer with a descent sized monitor then you can also see a tiny little dark spot where the nut and bolt are. I don't recall the zoom magnification of the picture below, but this is probably as close as you will get with a camera with a normal to pretty good zoom. 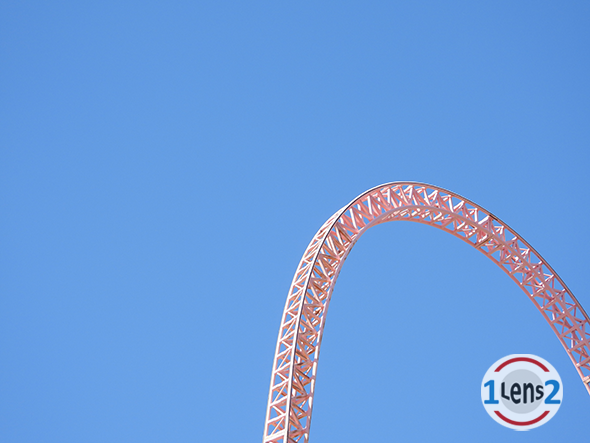 But I'm not using a camera with a normal zoom or even a pretty good zoom. I'm using the Nikon COOLPIX P1000 ultra-zoom camera, so we're just getting into the full zoom range!

In this next picture, we've entered a visual zone that pretty much no one at Knotts Berry Farm has ever seen. Except, I suppose, for the roller coaster maintenance crew. Or someone with their own COOLPIX P1000. Or someone that brought a telescope to the amusement park. Here we can see the nut and bolt clearly. And we can also see that the roller coaster track is going to need to be painted soon :) 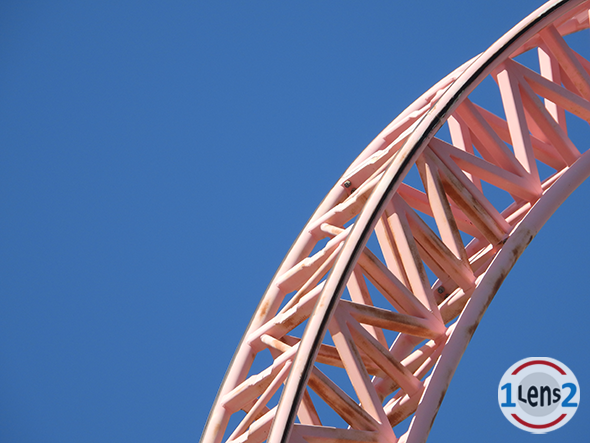 Keep in mind that at these higher levels of magnification, the field of view is getting smaller. Look at the bolt and you'll see that the camera did a pretty darn good job at focusing on it. Other parts of the picture appear to be out of focus, but that's the limited field of view rather than a badly focused picture. Also, the area of the tracks where the roller coaster trains have rolled over it and worn off the paint tend to make the track look out of focus. I think that's an optical illusion because if you look really closely on a computer monitor then you'll see that those areas (in the area of focus) are sharp.

The final picture shows the nut and bolt at the P1000's maximum optical zoom of 125x magnification or the equivalent of a 3000mm lens on a 35mm camera. I'd like to take a moment to say that it's insane how big this object is at 258 feet away. Clearly you could never see this with the naked eye or even with most zoom cameras from the ground. 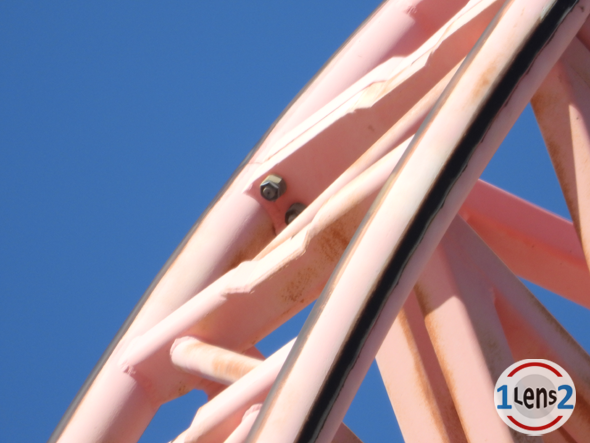 The nut is not perfectly in focus, but that's my fault, not the camera's fault. Closer inspection of the picture shows that while I was desperately trying to hold the camera steady at this level of magnification (which is hard to do by the way), the camera focused on the tubular track in the lower center section of the screen. That area is surprisingly sharp as you can see the varying thickness of the paint on the metal. That's probably a difference of about one sixteenth of an inch! 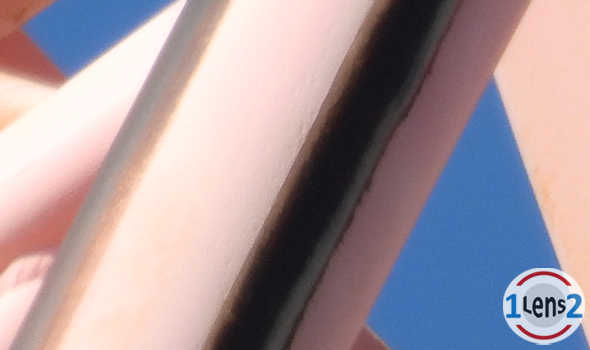 Varying thickness of paint seen from about 260 feet away!

But the nut and bolt are actually bigger than what you see in the picture above. The width of the website is smaller than the resolution of the photograph so I had to scale down the photos so that they would fit on this page. But if I keep the photo at its actual resolution and crop it to fit on the page then we see that the actual size of the nut and bolt is even bigger! 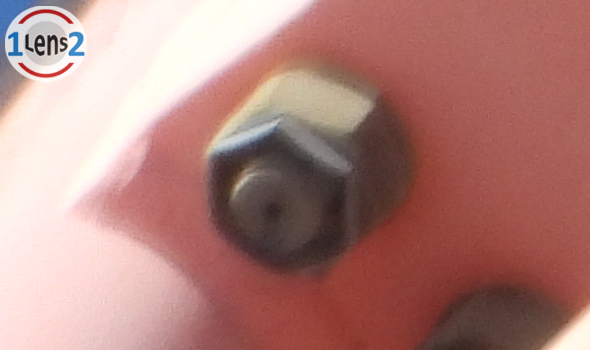 The size of the nut when viewed at full resolution.

...and out of focus because of operator error :(

Well, there you have it. Now you know how close 125x magnification is with the Nikon P1000 camera when zooming in on a twenty-story high roller coaster! Want to see a video of the Nikon COOLPIX P1000 zooming in on the tower? Check out the video below! 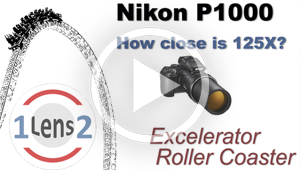 Click to Watch the Video!
This article, the pictures and the video are Copyright 2020 One Lens Two. All rights reserved. These materials may not be published, broadcast, rewritten or redistributed in whole or in part without the expressed written authorization from One Lens Two.