Time-lapse With the Panasonic HC-V750 Camcorder

Time-lapse videos can be magical, bringing things to life that normally seem static and motionless. With time-lapse, you can see plants grow, watch storm clouds form in the sky and reveal the activity of slow moving creatures. Time-lapse can also turbocharge the motion of things that don't normally seem motionless, allowing you to understand rush hour traffic patterns or condense an entire day's event into a few minutes.

The Panasonic HC-V750 camcorder is a great choice for people who want basic time-lapse functionality with a few options to control the effect. It seems to me that the HC-V750 will meet the needs of most consumers and "pro-sumers", however professional time-lapse videographers may want to look elsewhere.

This article describes how time-lapse works and how you can use the Panasonic HC-V750 camcorder to create time-lapse videos. The sample video at the end includes time-lapse scenes made with the different frame rate options available the HC-V750 as well as directions for navigating the HC-V750's menu system to turn on and setup time-lapse mode.

How Does It Work?

Basically, the time lapse function records a scene at a lower frame rate. Then, when you play the video back at the regular frame rate, the motion of the scene appears to be sped up. It's basically the opposite of slow motion recording.

Here's a quick demonstration of a time-lapse recorded at rate of 1 frame per second. Watching an ice cube melt in real time is as boring as it gets, but speed up the motion and it could be a scene from the movie adaptation of H. G. Wells' "The Time Machine"! 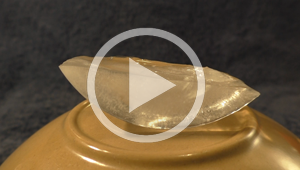 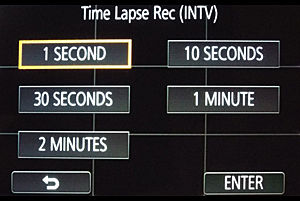 With these options, the fastest lime lapse speed available to you is 120 times faster than the slowest time lapse speed. Note that the HC-V750 can only record time lapse when in the AVCHD recording format.

Strictly speaking, you don't need a time-lapse function in your camera to make time-lapse videos. If you have access to even the most basic video editing application, then you can simply record the scene at the regular frame rate and then speed it up in post-production. That will certainly work, but there is a major drawback to this approach: the size of your recorded video!

The amount of real time that will elapse while you're recording a video with your camera's time-lapse function is much longer than the length of the resulting video. For example, a timelapse that captures a sunrise from darkness to full brightness can take an hour or more. Recording that sunrise on the HC-V750 camcorder, which records at 28 Mbps in AVCHD mode, will make a file that's... really big!

Also consider that many cameras will break long videos into multiple files. Working with multiple large files can make video editing more difficult. Using the timelapse function in your camcorder will likely result in a single, smaller file which will make your post production work much easier.

Video editing software can also help you fine tune the speed of a scene's motion in the final product if you didn't get it quite right in the field. This works best when speeding up the motion rather than slowing it down because slowing down the motion often means dropping the video's frame rate below the regular frame rate of 30 or 60 fps (roughly).

The video below shows sample time-lapse recordings at different frame rates using the Panasonic HC-V750 Camcorder. Scenes include dawn and daytime skies, cars, airplanes and golfers in and around the Phoenix, AZ area. The end of the video shows step by step screen shots of navigating the HC-V750 menus to turn on and setup time-lapse recording. 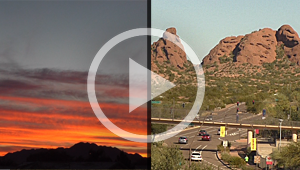 The HC-V750 used to make this video was purchased in 2014. The actual model number is HC-V750K. Later models of this camera and cameras with similar model numbers may function differently.

One Lens Two is not affiliated with the Panasonic Corporation. This article and the video are One Lens Two productions. All rights reserved. This material may not be published, broadcast, rewritten or redistributed in whole or in part without the expressed written authorization from One Lens Two.