Slow the World Down with the FinePix S9400W Camera

Watching just about anything in slow motion tends to be either fascinating or hilarious. There have been television shows, YouTube channels and websites dedicated to filming things in slow-motion.

Not many cameras have the ability to record slow motion videos. But with the Fujifilm FinePix S9400W 50X zoom camera, you too can record things moving, falling, popping, breaking and crashing at slow speeds, albeit with some limitations. This episode of One Lens Two's series on the FinePix S9400W is all about the camera's slow motion settings.

How does it Work?

Making a slow motion video requires two steps. First you record the action at a high number of frames per second (fps). Then, you play the video back at the regular frame rate. And, viola! Motion appears to slow down. It's pretty simple: the faster the recording frame rate, the slower the resulting video looks when it's played back.

To choose a slow motion option, open the camera's menu, select the "camera" tab (the camera icon on the left hand side of the menu) and scroll down to "Movie Mode". Selecting Movie Mode will present all of the S9400W's frame rate and resolution options.

As is the case with most cameras, you might need to add more light to your subject when recording in slow motion. A higher frame rate means less time for light to be to hit the camera's sensor during each frame. At the highest frame rate, frames are going by eight times as fast as the regular frame rate setting. In One Lens Two's test video below, the super slow motion video clip of the cookie dropping into the glass of milk required a 100W light bulb about twelve inches from the glass.

There Are Some Limitations

It's important to keep in mind that the resolution of slow motion videos taken with a S9400W camera goes down as the frame rate goes up. Lower resolution means that the video will look smaller when you play it back. That might not be too noticeable when you watch the video on your phone, but you'll likely see a difference on a tablet, computer or smart TV. Some playback applications allow you to enlarge the size of the video, but the lower resolution video will look fuzzy or "blocky".

Also, sound is not recorded with the slow motion settings so you'll be making silent movies. You'll have to use video editing software to add sound to the video.

Finally, and perhaps most surprising, you cannot zoom in or out while recording slow motion video. You can adjust the zoom before you start recording, but once recording starts, the controls to zoom in and out are disabled. Well now, that's just a bummer for a zoom-centric camera.

One Lens Two's video below runs the camera through its slow motion paces and shows you what videos look like at all of the frame rate and resolution options. The samples video clips include bouncing balls, people walking, a waterfall and a cookie dropped into a glass of milk. The last test was both entertaining and delicious! 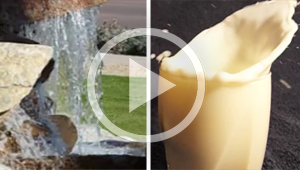 The videos in the video were not altered in any way. They were assembled as-is into the final product using a video editor. Also, note that the S9400W used in this video was purchased in 2014. Later models of the camera may function differently.

The bottom line is that recording things in slow motion is, well, just fun. If you're looking to have some fun with slow motion then this camera can certainly help you with that, especially if you're only going to watch the lower resolution video on the camera's display or on your phone. This camera is probably not the best choice if you've got more than goofing around in mind. Everyone else can take their S9400W out into the world, pick a frame rate, point it at whatever is moving and press record!

This is the fourth episode in a series of videos on the Fujifilm FinePix S9400W. Throughout the series, almost every photo and video function of the camera is demonstrated, so be sure to check out the other episodes by clicking on the links below!

One Lens Two is not affiliated with the Fujifilm company and was not compensated in any way for producing this video. This is an One Lens Two production. All rights reserved. This material may not be published, broadcast, rewritten or redistributed in whole or in part without the expressed written authorization from One Lens Two.