From the mid 1800s to the early 1900s, trains were the preferred mode of transportation for medium to long distance travel in the United States. It wasn't uncommon during that period for entire towns to be built around the rail lines. In those towns, trains would regularly travel on the streets that ran directly through residential and business districts. By the 1930's, more and more people began driving automobiles and soon cars started to share the roads with trains. Can you imagine what a train would look like rolling through the center of town, sharing the road with cars and pedestrians? 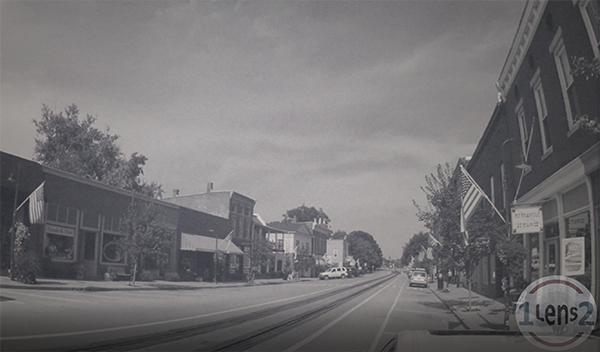 Well, it turns out that if you know where to look, you can still watch trains run through the center of town. Rail fans call this "on street running" or just "street running" and it isn't limited to small trams, trollies and light rail. We're talking about full size passenger and freight trains running down the street. Want to know where to find them? You can check out Wikipedia for a list of street running areas around the world. 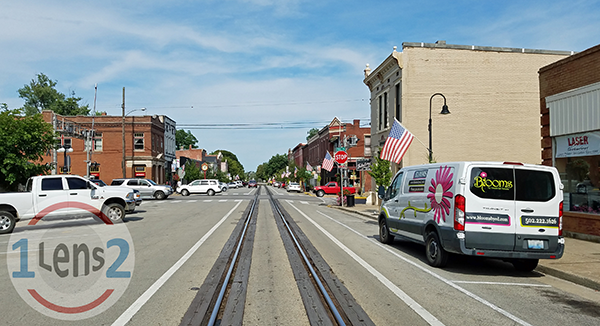 The CSX rails in the middle of Main Street.

One of the best remaining places to watch street running trains is La Grange, Kentucky where freight trains literally travel up and down Main Street which runs through the heart of the city's business district. The rail line that runs through La Grange is a CSX mainline track, so the trains rolling through town are massive with multiple diesel engines and upwards of two hundred railcars. The video at the end of this article shows a train with four engines and about one hundred and eighty railcars traveling down Main Street. 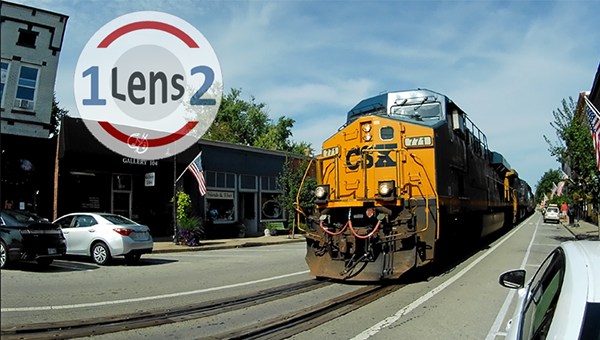 You can take a virtual walk down the train tracks on Main Street with this link to Google Maps Street View.

I should probably point out that we're talking about La Grange in Kentucky, which is not to be confused with the city of La Grange in Texas. Coincidentally, La Grange, TX also has a rail line running down a street, but that street (La Fayette Street) does not run through the center of town. So, street running in La Grange, KY is much more impressive! 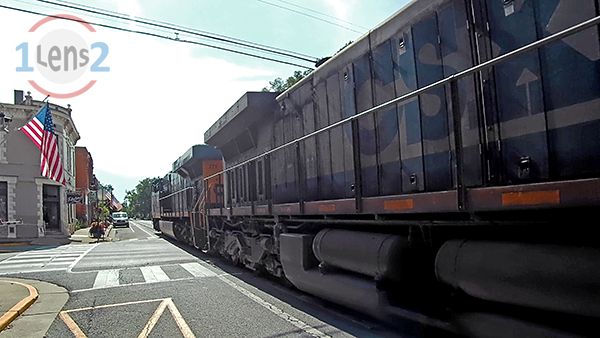 The front end of a two mile long train on Main Street.

La Grange is about a half hour drive from Louisville, KY. It's also about an hour and 15 minute drive from both Cincinnati, OH and Lexington, KY. While on a trip to Kings Island in Mason Ohio, I drove an hour and a half to La Grange. I probably fall into the category of a moderate rail fan and I'm glad I made the trip. The next time I find myself in the area, I will absolutely spend more time in La Grange, KY. 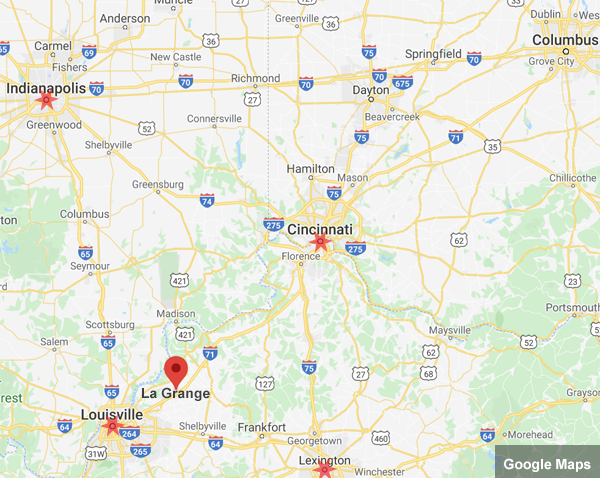 It's simply amazing to watch a massive freight train rolling through the heart of the town's business district. The train runs down the street just like cars and trucks did moments before it's arrival. Even standing safely on the sidewalk, the train is just a few feet away. Is there a fence or concrete barrier to separate people and cars from the one hundred gazillion tons of train rolling though the bustling town? Nope! 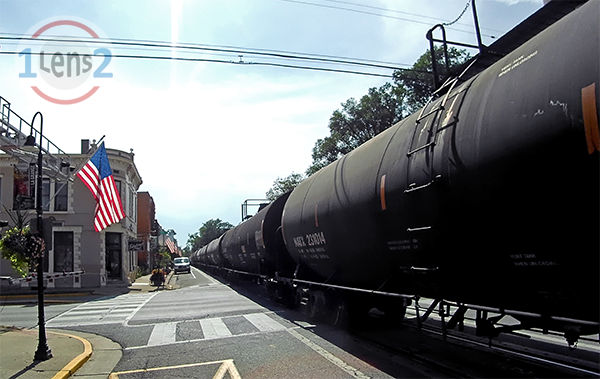 Trains can be over two miles long!

You don't just see the train go by, you hear and FEEL the train go by. The locomotives are basically giant power plants on wheels that rumble and shake the ground as they go by. This is definitely not something that you experience every day! I don't see how anyone could not be spellbound by the sight, sound and feel of at least the first train that they see roll by. 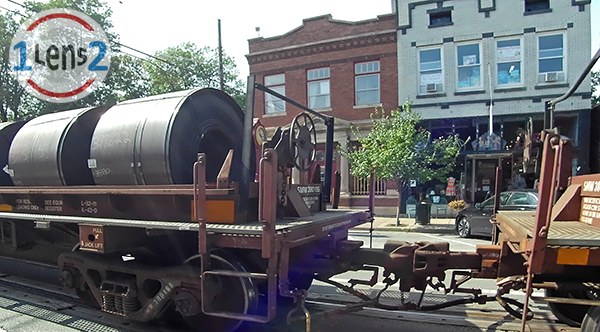 A freight train in front of the shops of La Grange.

I read that years ago, twenty-five to thirty trains would roll down Main Street in a 24 hour period. Today, it's more like ten to fifteen trains per day. Trains don't generally appear at regular intervals and there's no schedule for freight trains, so the time between trains can vary quite a bit. It could be a few hours between trains, so plan to spend at least half a day at La Grange. I waited about an hour and a half to see the train that I recorded in the video below. 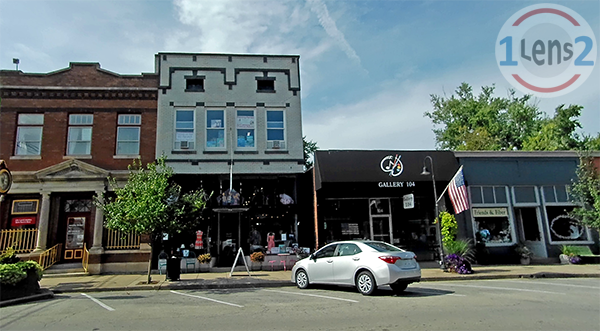 The shops and restaurants make for a nice day of rail fanning.

Considering that you'll likely have some time to kill between trains, La Grange is a really nice place to watch trains. You can sit on one of the benches along the sidewalk, relax in a coffee shop, have a meal at a restaurant or even do some shopping while you wait for a train to come by. Don't worry about not being in a good location when the train arrives. It travels the length of the business district and it's kind of huge so you'll be able to see it from just about anywhere!

Watch the trains from anywhere on Main Street.

Check out the La Grange Main Street Program website for a listing of all there is to see and do on Main Street. Heck, there's even a railroad museum down the street. The museum is located along the rail line, so you won't miss any train action while you're there.

A train runs through it.

I recommend that you watch your first train while standing along Main Street in La Grange, KY. Once you've marked that off your bucket list, you can experience the trains from a different perspective by watching them from the two-story train observation tower which is located about 200 yards from the corner of Main Street and First Avenue.

From the vantage point of the tower, you can see what's inside the railcars that have open tops if you wonder about things like that. It also provides kids with a different perspective as they're always looking up at things. Actually, the tower is close enough that you could probably start watching a long train from the shops on Main Street and then watch the rest of the train from the observation tower. Hey, maybe I'll do that on my next trip to La Grange! 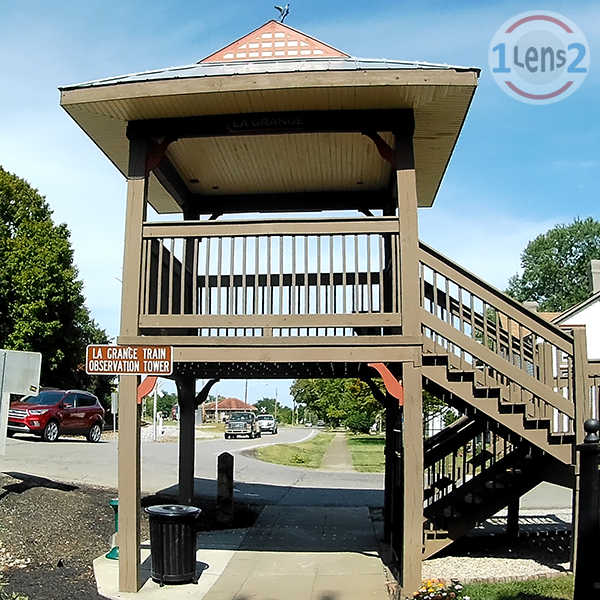 Main Street has an observation tower for watching trains.

I imagine that even people who aren't particularly interested in trains will enjoy spending some time here, so your family and friends might actually come along with you to this rail fanning location! Just keep in mind that Sunday afternoon might not be the best time to watch trains in La Grange. That's when I was there and many of the businesses along main street were closed. Cue the sad trombone sound...

But La Grange provides more than a convenient place to spend your time between trains. Main Street presents a quaint, old style downtown backdrop to the train watching experience. I imagine that this was the scene seventy or more years ago in La Grange. When a train is rolling down the street, you can really get pulled back in history to a time when trains were a common sight in the towns and cities across America. And for some folks, that's a priceless experience that's hard to find these days. 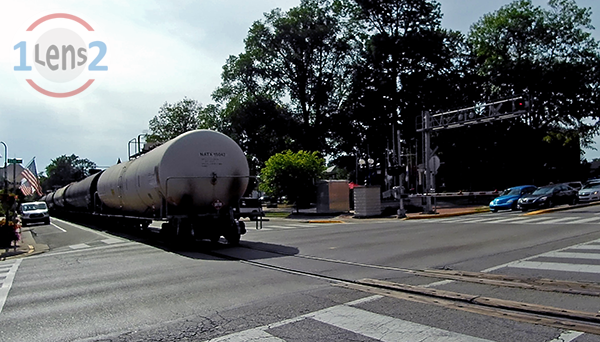 After the train passes, things return to normal.

If you won't be able to visit La Grange, KY in person anytime soon then click on the image below to watch my video so that the trains in La Grange can run mainly in your brain (OK I've been waiting the entire time that I've been writing this article to use that modification of the well known phrase from the George Bernard Shaw play). You'll see the entire train with three engines and over 180 railcars roll by. I'm not a train expert, but I calculate that the train in the video is over two miles long! I'll also show you what it might look like if the trains were to thunder down Main Street at full speed! 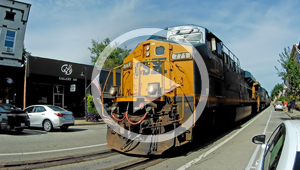 If you liked my La Grange street running video and want to see more La Grange trains, then you might enjoy watching the 7x24 live webcams located on Main Street in La Grange. They are provided by a rail fan called "Virtual Railfan" and there's a chat window on one of the webcams where you can chat with other people who enjoy watching trains. Check out these webcams on YouTube by clicking on the pictures below. I like to keep them both open at the same time in separate web browser windows for a panoramic effect. 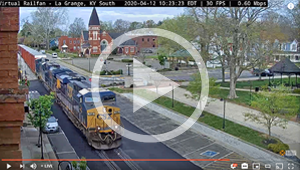 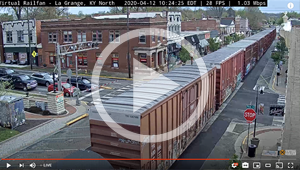 In case you're wondering, the webcams are located at the southwest corner of Main Street and 1st Avenue. They are on near the top of the two story building that houses Blooms Florist.

The train webcams on YouTube.
This article, the pictures and the video are Copyright 2020 One Lens Two. All rights reserved. These materials may not be published, broadcast, rewritten or redistributed in whole or in part without the expressed written authorization from One Lens Two.