While waiting to board a flight at Tampa International airport in 1993, I saw the Shamu blimp in the sky and headed for the airport. It was surprising to see the SeaWorld blimp in Tampa because I knew that it was based out of the Kissimmee, FL. airport which is closer to SeaWorld Orlando and the other theme parks. I pulled my Minolta Master Pro 8-918 Hi-8MM camcorder from my camera bag and videotaped the blimp landing and then being pulled to the hangar, or to wherever one takes a giant airship after it's on the ground.

I'm no blimp expert, but this didn't appear to be a very smooth landing. I can't help but imagine that someone on the blimp that day heard the words, "How would you like to try to land a blimp?" In any case, the blimp can be seen gently bobbing up and down on it's approach to the landing area and I'm almost positive that the airship's gondola (the compartment on the bottom that houses the crew and passengers) hit the ground as the airship crew runs in to grab the ropes. It's hard to tell though. What do you think?

A link to watch the video is at the bottom of the article.

When the Shamu Blimp Flew

According to an article in the October 21, 1994 Orlando Sentinel, SeaWorld leased the blimp from Airship International Limited (AIL) in July 1990 and used it until October 1994. The Shamu blimp was 194 feet long, 63 feet wide and 67 feet high. It was powered by two Porsche 930 engines and had a capacity of 235,400 cubic-feet of helium.

An article published in the January 25, 1993 issue of Sports Illustrated stated that that clients paid AIL about $350,000 a month to lease a blimp and it cost the company about $250,000 a month to maintain and fly it. Each blimp in AIL's fleet (there were three at the time) required a staff of 25 people, two maintenance trucks, a bus for the crew and a 16-ton truck that had a mast mounted on it to anchor the blimp when it was on the ground.

The Blimp is Grounded

Sadly, SeaWorld's Shamu Blimp is no longer floating over the Florida skies. October 1994 was the last time it flew. After that, it was deflated and stored at a hangar in Lakehurst, NJ. According to Airship International's Annual Report filed with the SEC in 1994, the company rented space there to perform maintenance and related functions on its blimps. Additional research suggests that the hangar in Lakehurst is actually Hangar 1 at what is now the US Naval Air Engineering Center.

If Lakehurst, NJ sounded familiar to you in the context of airships then you'd be onto something. The US Naval Air Engineering Center was formerly known as Lakehurst Naval Air Station which is where the Hindenburg airship crashed on May 6, 1937. A low-key memorial marks the spot where the Hindenburg's gondola hit the ground. Google Maps shows the location of the memorial which is about a thousand feet or so away from Hangar 1 where the Shamu blimp was stored.

Where Is It Now?

So where is the Shamu blimp today? The answer to that question is not clear. Recent pictures of the inside of Hangar 1 don't seem to support the idea that there's a deflated blimp in there. And AIL is no longer in business (that's a story in and of itself). I like to think that the Shamu blimp is neatly stacked in the corner of a warehouse somewhere as a team of airship enthusiasts prepare to bring it back to life...

The video below was recorded with a Hi-8MM camcorder in 1993, so it's not the best quality by today's standards. I recommend that you resize your browser window to make the video smaller so the picture doesn't look so blocky. Be sure to watch the video to the end to see a "fast flyby" of the blimp. Or at least what I think a fast flyby would be like if blimps could fly fast :) 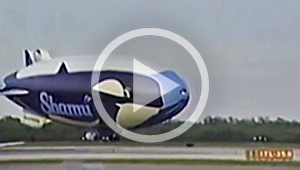 In And Around Phoenix (IAAPHX) is not affiliated with SeaWorld Parks and Entertainment or Airship International. This article and the video are IAAPHX productions. All rights reserved. This material may not be published, broadcast, rewritten or redistributed in whole or in part without the expressed written authorization from IAAPHX.