Do you like to watch trains? If you're near northern Ohio or you'll be traveling to that area, then you might want to spend some time in the city of Fostoria, OH which has developed a public park for watching trains. Park is called Fostoria Iron Triangle Railpark and it's located just south of Lake. This train park is about an hour and fifty minutes by car from Detroit, Cleveland or Columbus. 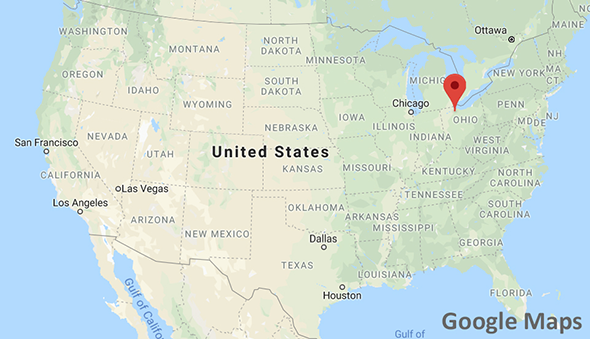 The Fostoria Iron Triangle Railpark is in northern Ohio. 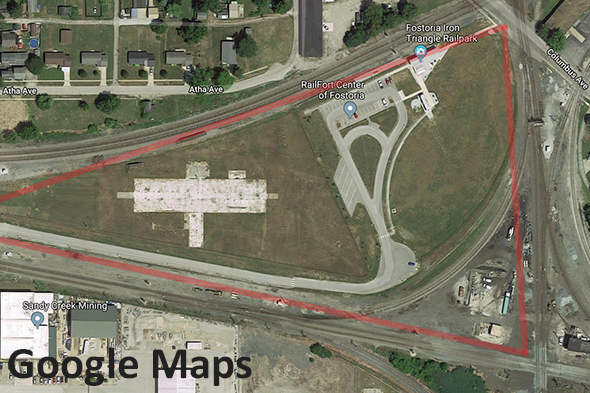 The Fostoria Iron Triangle Railpark as seen from above.

You can see what it's like to watch trains from Fostoria Iron Triangle Railpark in the videos that you can watch at the end of this article.

By any measure, this is a big park. And for public places where you can watch trains, this park is huge! At least, that's what I'm told by railfans as this is the first park that I've visited where you can watch trains. There's plenty of parking, including a parking area for buses and RVs, and there's a lot of grass for the kids to play on so they'll have something to do in between the appearances of trains.

Speaking of kids, while I was at the park, I found it to be a kid friendly place and some of the train engineers waived at the kids as they drove their trains by. Plus, there's a four foot fence along the entire perimeter of the park designed to keep the kids - and the adults - away from the railroad tracks. The fence is made of... iron of course!

There's also an old B&O caboose at the park that you walk up to and check out. But sadly, you won't be able to see inside the caboose unless you're small enough to fit through the little holes in the netting that covers the stairs at both ends of the caboose. 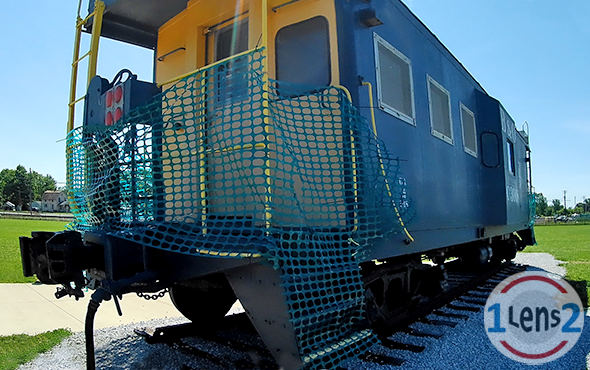 There's an old B&O Caboose at the park.

The amenity that sets this park apart from most other parks is that it has a viewing platform close to one of the rail lines. And the platform is well equipped for watching trains or railfanning as I'm told it's called. The viewing area has restrooms, a water fountain and a vending machine with snacks. It also has benches and tables so you can relax and have a meal while you're waiting for the trains to go by. If you're interested, you can listen to the railroad dispatch radio on the speakers on the viewing platform. 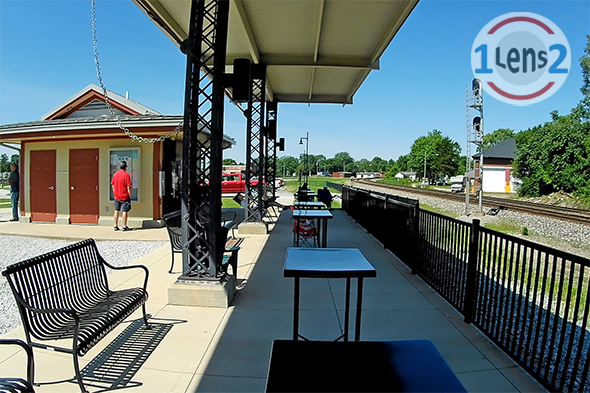 There's even a map of the local restaurants hanging on the wall of the small building near the viewing platform so you'll know what the local options are when you need take a break and grab something to eat or drink. It's like they've thought of everything!

By the way, I'm guessing that the City of Fostoria invested money in the rail park in part to bring in visitors in order to boost the local economy so be sure to stop at a Fostoria restaurant or shop while you're in town. And let the local business know why you're in town. If the investment in this park shows a positive impact in Fostoria then perhaps we'll see additional railparks in other locations.

I think the most beneficial aspect of the park is that the viewing platform is covered. Not only will the cover keep you out of the rain, but it will also protect you from the hot sun in the summer. I surely would have left the Fostoria railpark with a sunburn on the day that I visited in June were it not for the covered viewing platform. I suppose if you visit Iron Triangle Railpark in the winter then the cover would also keep snow from falling on your head. 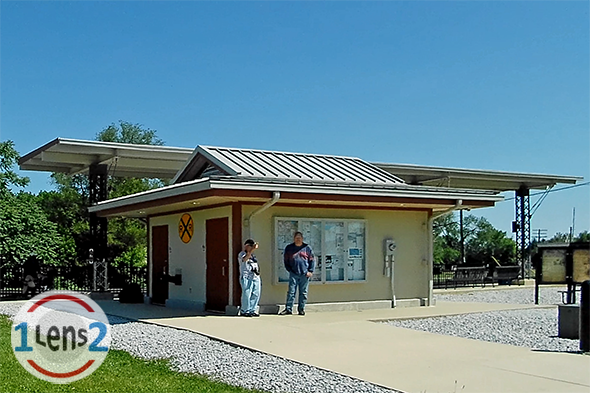 Restrooms and a water fountain at the park.

The platform is really close to the tracks on the north side of the rail park. While I was there, people spent most of their time on the platform, but keep in mind that the trains will cruise by on the other tracks too. I found that walking along the perimeter fence that runs along the platform and to the east kept me close to most of the trains that went by. But this is a really big park so you likely won't be near the right tracks all of the time.

The other key ingredient of a great railpark is... trains! Within a half hour of my arrival at Fostoria Iron Triangle Rail Park, the first train slowly rolled down the rails on the east side of the park. I was there on a weekday in June and rains seemed to come through about every twenty minutes or so. Most of the trains were on the tracks that run along the east side of the park (to the right of the viewing platform) and they ran in both directions. A lot of the trains in the two videos at the end of this article are on the eastside tracks.

A CSX train running along the east side of the park.

A long train wrapping around the back and side of the park.

I should probably mention that I'm not an expert train spotter or super serious railfan. I just like to stop and watch trains go by from time to time if I'm in an area where trains are going by. I was at the park on a weekday around noon and there seemed to be a mix of serious rail fans and casual observers. Everyone seemed nice and I struck up a conversation with a retired guy who travelled around to different spots to watch trains. He was a very nice guy and I learned a lot from talking with him.

While I was there, I saw locomotives from CSX, BNSF and Norfolk Southern. And they were pulling types of railcars from lots of different companies and locations. All of the engines I saw were on the front of the trains. No rear or mid DPUs. One of the trains on the east-west tracks had two orange BNSF engines and three black Norfolk Southern engines. I thought that was cool to see. 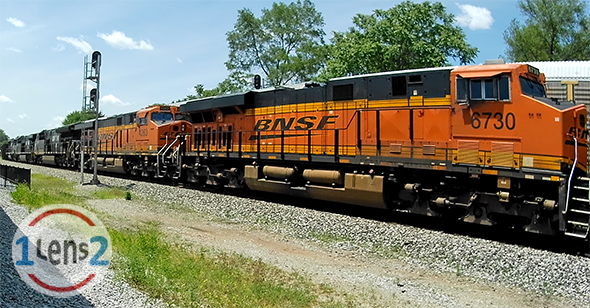 The trains on the tracks near the viewing platform were moving a lot faster. Keep an eye on the crossing signal down the tracks to the left of the platform on Poplar Street so you'll know if the train you hear is on the tracks that run in front of the platform or the track that runs along the back of the park. I was lucky enough to see two trains going by the viewing platform at the same time which was a real treat to see ant it appeared to be a real crowd pleaser for everyone.

One of the interesting things that a railfan I met at the park pointed out is the effect on trains as they cross the diamond to the left of the viewing platform. By way, I learned that a diamond is where two tracks cross, in this case near Columbus Ave. The railcars tilt and sway quite a bit and throw up a lot of dust as they as they travel over the diamond. I'm no train expert, but I would think they'll have to fix that one of these days. Take a look at the videos below and decide for yourself if the swaying and the plume of dust is normal.

Oh! And while I was there, I saw one of those jet powered trains go by. You know, the ones where some of the freight cars have jet packs mounted on them to help speed the train up to super-fast speeds? It was amazing to see and hear the jet engines fire up and push the train to speeds faster than I had ever seen for a freight train. I had been away from the covered viewing platform and out in the sun for a while when I saw the it. I looked back to the viewing platform to point the jet train out to the others, but no one was around. It turned out that I was the only one who saw it and everyone that I have spoken to since then has said that there is no such thing. Huh... it's as though I imagined it :) 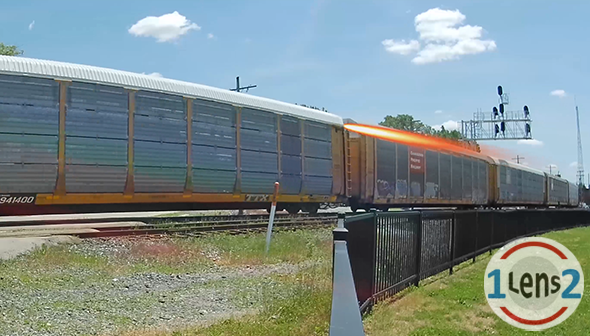 A jet train speeds by on the east side of the park?

If you or someone you know would enjoy watching trains then I highly recommend Fostoria Iron Triangle Railpark. I drove about an hour to spend some time there and I think it was definitively worth it. The park's covered viewing platform protects you from sun, rain and snow which makes for a relaxing time watching trains. While I was at the park, there was a mix of adults and kids as well as serious railfans and casual observers. And while you can't predict when trains will go by, the frequency of slow moving and fast-moving trains was plenty enough for me to keep my interest. 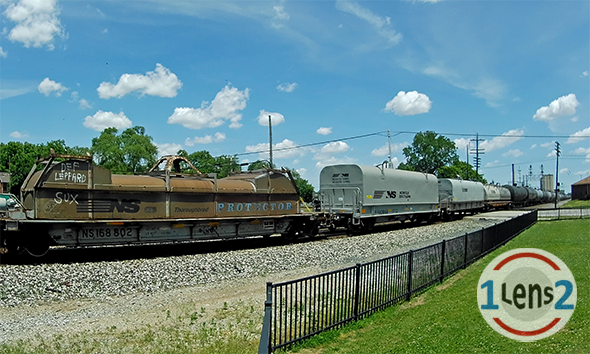 The railpark seemed to be a kid friendly place with lots of space for them to run around in between the appearances of the trains. And the perimeter fence keeps them - and the adults away from the train tracks. There were some people at the park but it wasn't crowded on a weekday during summer vacation for the kids. I really like the idea of a safe place for people to watch trains. It's much better than sitting in a parked car or standing on the side of the railroad tracks which, it would seem to me, can make engineers and local authorities a little nervous.

If you enjoy your time at Fostoria Iron Triangle Rail Park then you might be interested in another location for watching trains that's not too far from Fostoria. Deshler Crossroads Park is about forty minutes to the west of Fostoria in Deshler, OH. It's not as grand a railpark as the one in Fostoria, but there is a fair amount of train traffic there too. How do I know this? I've watched the 7X24 live webcams at Deshler Crossroads Park:

The first video below shows what it was like to watch trains from Fostoria Iron Triangle Railpark on a sunny day in June 2019. You'll see the park's layout, the covered viewing platform and some of the trains that rolled by while I was there. I also caught what appears to be a jet train speeding up as it passed the park, although I had been away from the covered viewing platform for a while out in the sun and everyone told me that I imagined it :) This video was shot with the Akaso V50 Pro in 4K at 30 frames per second. The Jet train was edited in Adobe After Effects. 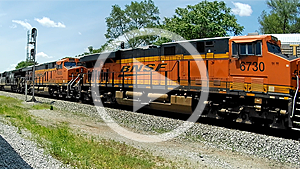 The second video is a compilation of many of the trains that I recorded that day. Most of the trains that rolled by were really long and took up to eight minutes to pass by. This video provides a half hour of mostly soothing trains sounds and sights with a sprinkling or really loud train horns! 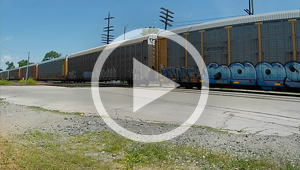 Click to Watch the Long Video
One Lens Two is not affiliated with the city of Fostoria or the Railpark. This article and the videos are Copyright 2019 One Lens Two. All rights reserved. These materials may not be published, broadcast, rewritten or redistributed in whole or in part without the expressed written authorization from One Lens Two.