We see birds all of the time. We hardly pay any attention to them most of the time. When we do notice them, we watch them flap their wings and then instantly they are flying through the air. The flapping is so fast that we can't really see what they're doing. Well, it turns out that birds are performing some seriously complicated motion with their wings in order to get into the air. If we could observe this complicated wing motion then we'd see just now amazing birds and their gift of flight are. I posted a slow motion video of birds at the end of this article.

The problem is that our eyes aren't designed to see things that move really fast. For example, one second a balloon is there and the next second it is gone after you stick a pin in it. It's the same thing with a bird flapping its wings. We can see that their wings are going up and down, but the true motion is lost in the flurry of action. In order for us to see what's really happening when a bird flaps its wings, we need to slow down the motion to a speed that our eyes can process. 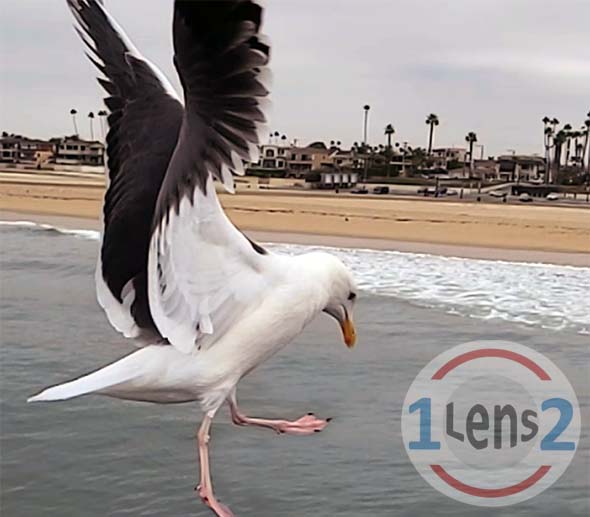 A seagull at Seal Beach in California

I recently acquired a Samsung Galaxy S21 which has a camera with a Super Slow Motion setting. Relative to most cameras on the market, the "Super" part of this setting's name is accurate. It's common for most cameras to record video at 30 or 60 frames per second (fps). The "SUPER SLO-MO" function on the S21 records video at 960 fps. So when you play Super Slo-mo video back at 30 fps, the motion captured is slowed down 32 times. To put that into perspective, if something takes one second to happen in real life, then it would take 32 seconds for that entire event to play back in Super Slow Motion. Or in the case of the Galaxy S21, a half second of real life motion takes 16 seconds to play back. That's pretty slow.

I had my Samsung SG21 with me while I was on the Seal Beach Pier in southern California. There are lots of birds on the pier at Seal Beach, mostly pigeons and seagulls from what I could see that day. The birds on the pier are accustomed to people walking near them, so you can get close to them before they fly away. This is important when using the SG21 because it's telephoto lens is not available when using the "SUPER SLO-MO" setting. The video below includes clips of birds taking off, flying or just scooting down the railing to get farther away from me. One of my favorite video clips shows a seagull almost tripping over his own feet as he tries to move away from me!

But the best slow motion clips in the video capture the beauty of birds taking off or flying. You can really see the intricate way in which birds move their wings in order to take flight. Some people might think that birds simply move their wings up and down like a child does when doing jumping jacks. But when seen in slo-mo, birds change the shape and motion of their wings as they raise and lower them so that their wings create left. It's actually quite a majestic scene to watch.

Slowing things down 32 times with the Samsung Galaxy S21 creates some really slow motion videos. But it wasn't slow enough for me! I imported the videos into Adobe Premiere Pro (video editing software) and then slowed them down an additional 20%. That means that the video clips below are slowed down 40 times! So now, a half second of real time motion takes 20 seconds to play back. This provides us with a really good view of the birds taking off and flying in slow motion. It's really fascinating to see!

Click on the picture below to watch my Super Slow Motion video of birds on the Seal Beach Pier in California. The birds that I saw on the pier were pigeons and seagulls. Some of the gulls were white and some were brown. I read that younger seagulls are more brown in color and older seagulls are white and grey/black. Keep an eye out for the seagull that steps on its own foot trying to move further down the pier railing to get further away from me when I get a little too close to him/her. It's subtle, but kinda funny! 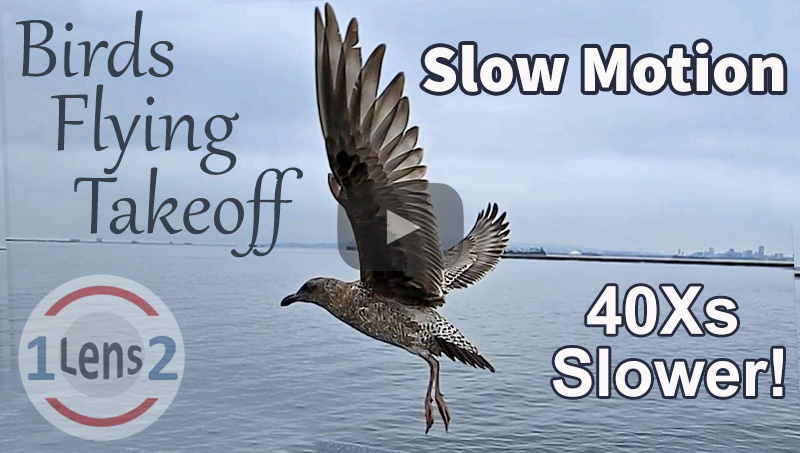 Thanks for reading this article and watching the video! There's plenty more on the website to enjoy! Some of my other articles and videos that are related to this one are listed below. Or browse through all of my articles here.