Each year, the city of Chandler, AZ hosts a carnival called the Ostrich Festival. It's called the Ostrich Festival because... well, because there are ostriches there. The ostriches at the festival are interesting, but you can get pretty close to them, so they're not particularly zoom-worthy. But there are also carnival rides at the Ostrich Festival. And a few of the rides are pretty tall - at least for a traveling carnival. So the objective of today's photo shoot will be to see how close we can get to the people at the top of a tall carnival ride using the Nikon COOLPIX P1000 super-szoom camera. That sounds like a fun photo shoot to me!

Before we dive into this photo shoot, I should mention that I attempted to setup an alternate photo shoot that I thought would be even more fun. What if we put the ostriches on the tall rides, sent them to the top and then zoomed in on them? Well, let me tell you that the animal handler at the festival did not think that was a good idea at all. So, we'll go with our original plan of zooming in on people on the ride.

You can click on most of the pictures below to see a larger view. Although the bigger view will only be noticeable if you're reading this article on a device with a larger screen, like a tablet, computer or a TV. Probably not so much on a phone.

Here's the setup for today's photo shoot. The city of Chandler is located in the Phoenix metropolitan area in Arizona. Each year, the carnival sets up in Tumbleweed Park. I don't know the exact height of the carnival ride that we'll be zooming in on, but I'd guess that it's about eighty feet tall. I suppose we could stand at the base of the ride, point the camera upwards and zoom in on the people. And that would be interesting... if we had a regular zoom camera. But we have a Nikon P1000 super zoom camera, so we'll be zooming in from a different city park called Paseo Vista Recreation Area. The distance from where I setup the camera and the people on the tall carnival ride is about one and a half miles (2.4 km). Now that is a suitable challenge for the P1000! Our photo shoot subject is 1.5 miles away.

At the end of this article, there's a video about the photo shoot. It includes the pictures that I took of the tall ride as well as video zooms of the Ferris wheel that was also at the carnival.

The picture below shows the carnival at the P1000's shortest focal length of 24mm (35mm equivalent). The only problem with this picture of the carnival is that we can't see the carnival! But it's out there - right in the center of the picture. By the end of this article, we're going to magnify this view by 250 times! A view from the P1000 at a focal length of 50mm is closer to what the scene would look like with your eyes if you were standing next to the camera. At this zoom level, you can make out the carnival, but just barely. 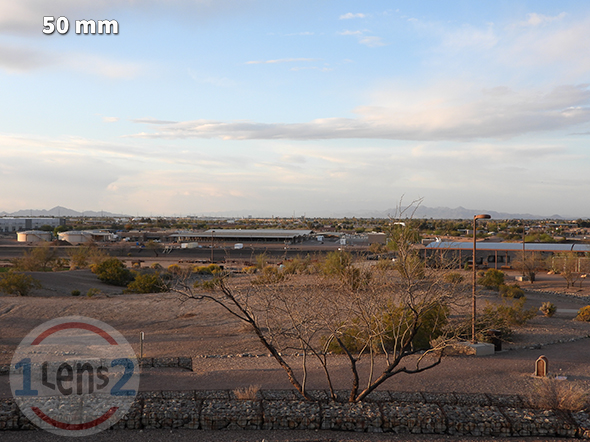 We have to zoom in to 1000mm to get a good picture of the tall rides at the carnival. From left to right, we can see the elevated swing ride, one of the Ferris wheels and the strange tall ride that we'll be zooming in on. We're not yet close enough to really see the people on the ride. At the P1000's maximum zoom of 3000mm, we can clearly see the two people at the top of the tall ride. Note that I adjusted the levels and sharpness a little in post-production, but not much. Just a reminder that we are 1.5 miles away from the carnival. To put that in perspective, if there were a straight road between the camera and the tall carnival ride, we would have to drive for a minute and a half at 60 mph (97 kph) to cover that distance. That's the end of the zoom range, but the P1000 provides a high resolution image for us to work with so we can do more with this picture. I didn't think to digitally zoom in further while on the photo shoot, but we can do that in post-production using Photoshop. Here's the 3000mm photo with a 200% digital zoom applied. That makes the people twice as big as they were in the base 3000mm photo. When zooming in from 24mm to 3000mm, objects are magnified by 125 times. That's because 3000 divided by 24 equals 125. Applying a digital zoom of 200% makes objects - and people - twice as large. So, the image above is magnified 250 times compared to the 24mm picture because 125 times 2 equals 250. That is an insane level of magnification for a camera that you can easily carry around with you. Consider this: i f a person who is 5 feet ten inches tall were enlarged 250 times, then that person would stand as tall is the Empire State Building skyscraper in New Your City!

The picture above is larger than the width of this website page, so I had to scale it down in order for it to fit the whoe thing on the page. If we crop the picture to a size that will fit on the page, then we lose some of the picture, but the resulting resolution is the same as the page so we can see true size of the people in the digitally enlarged picture. The true size of the people in the digital enlargement.

You can click on the picture below to watch my short video on YouTube about zooming in to see the people on the tall carnival ride. There's also a zoom in on a Ferris wheel that was also at the carnival. It's bigger than the Ferris wheel that we saw in the pictures. And that pesky little guy that seems to be following me around is back :) If you enjoy the video then you can let me know by liking the video on YouTube or maybe even leave a comment! 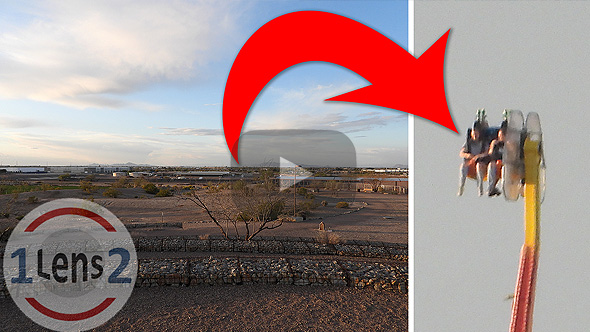