The Griffith Observatory is located north of downtown Los Angeles on the southern side of Mount Hollywood. From its perch high above the neighborhood of East Hollywood, the observatory provides sweeping views of LA, from the tall buildings of downtown to the vast north and west metropolitan areas of the city. You can basically see everything from up there. Those views are awesome, but your too high up to see anything in particular. Through the lens of most cameras, the subject of any picture that you take from up here is... everything. 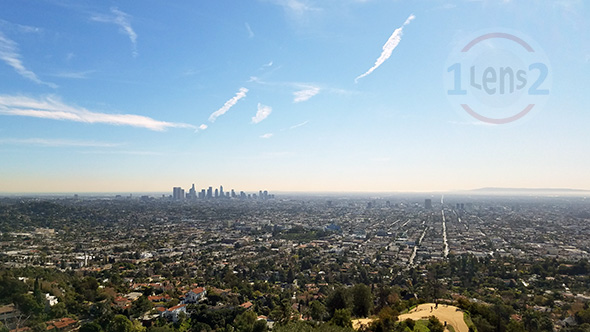 Sweeping views of Los Angeles from the Griffith Observatory.

On this trip to Griffith Observatory, I wanted to capture images of the street below. A sort of street scene if you will. But how could I do that from so far away? It didn't take long for me to realize that the answer was rather obvious. I'm at an observatory. Observatories have telescopes. I simply had to open one of the observatory's dome roofs and point the telescope towards the streets below. Piece of cake! 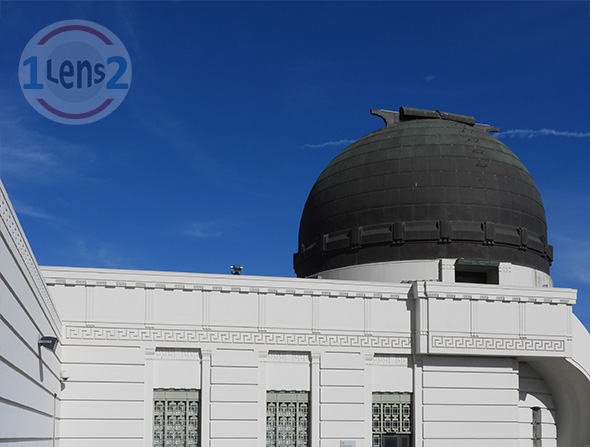 One of the dome roofs at the Griffith Observatory.

OK, so here's a heads up for anyone visiting the observatory. It turns out that you're not allowed to borrow the giant 12-inch Zeiss refractor telescope. Even in the daytime when no one is using it. And even if you say please when you ask. And even if you try to slip the security guard a twenty dollar bill. That's a real bummer because it looks like that telescope could snap an epic close-up shot of the streets below. I mean, it can show the planet Saturn, so... 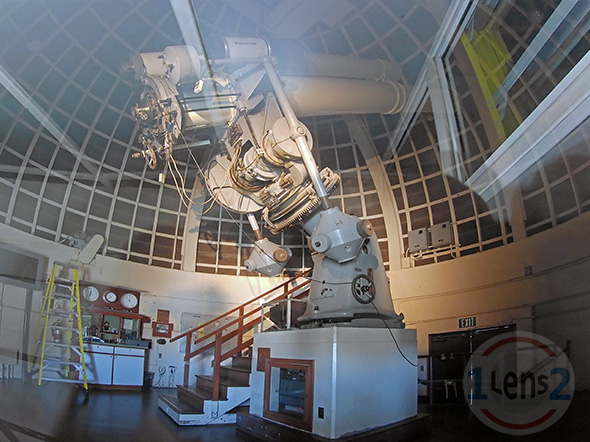 No worries, I came prepared and brought along my Nikon COOLPIX P1000 super zoom camera. 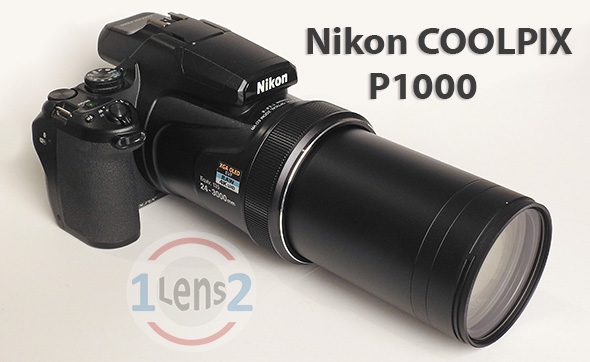 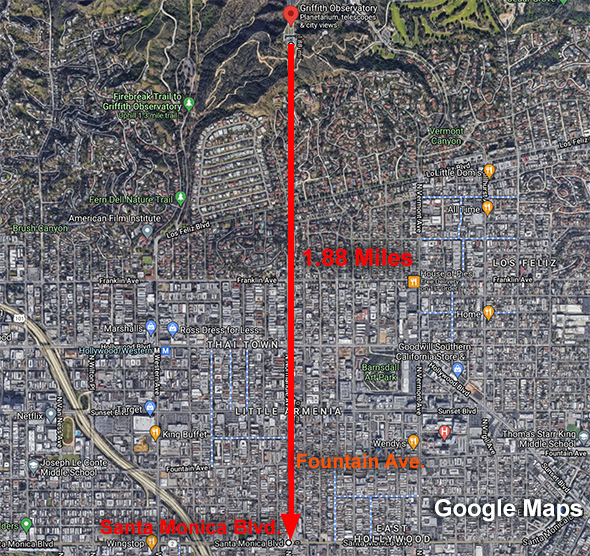 How far away will we be zooming?

I find the Griffith Observatory to be a great location to showcase the capabilities of the Nikon P1000 because of the fabulous view, of course, but also because there is a ledge all around the exterior walkways of the building. 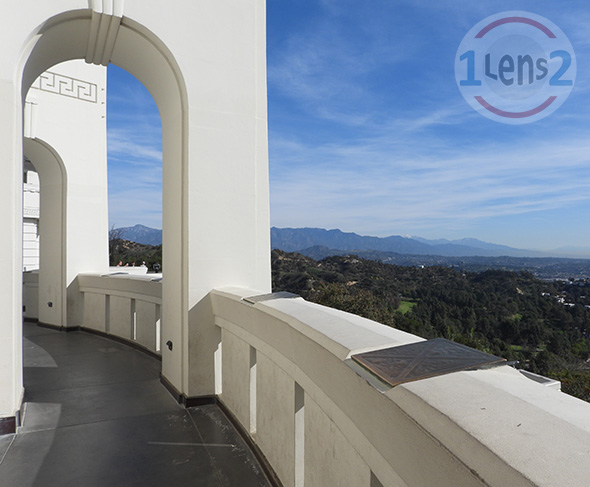 The ledge along the exterior walkways.

The ledge is at a good height (at least for a tall person like me) to support your elbows as you frame your shot. You can also place the camera directly on the ledge when you're taking a picture. Although, I should point out that the ledge isn't the best tripod alternative. As you can see in the picture above, the ledge isn't perfectly flat and those metal squares are not level, so using those will point your camera mostly to the sky. When I was there, I had to slip a folded piece of paper under the camera when it was on the ledge to point the lens in the right direction. Next time, I'll bring my bean bag camera mount. 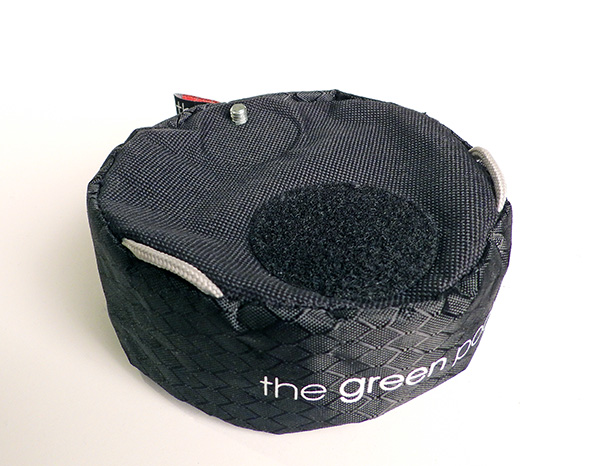 Next time, I'll also attach the wrist strap to the camera and keep it securely looped around my wrist because the camera would fall a long, long way down if it were to slip out of my hands. I had a couple of close calls that day which were mildly terrifying.

Let's take a look at the pictures that I took zooming in to the intersection of Normandie Avenue and Fountain Hills. I took these pictures as .jpg files in the camera (i.e. not RAW) and the only adjustment I made in Photoshop was to add the One Lens Two watermark. You can click on the pictures below to see a larger view of the image. The larger pictures were saved in Photoshop as .jpg files at a quality level of 100%, but just a reminder that no JPG quality level is lossless.

All of the focal length references in this article are the 35mm equivalents. And the magnification numbers are relative to the P1000's widest angle focal length of 24mm. 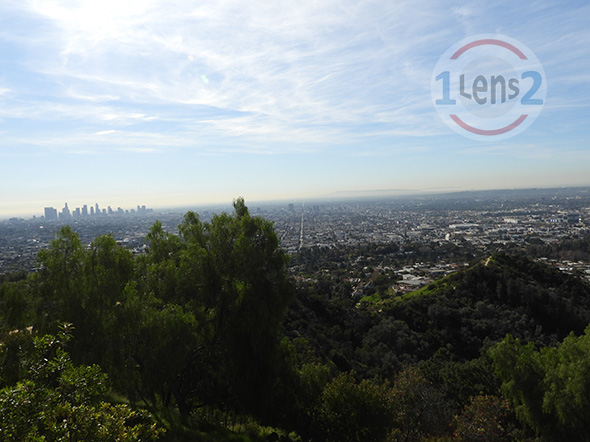 Click to see a full-size picture
In this wide angle shot, you can see downtown Los Angeles on the left and proof that my ability to take a picture that's level with the horizon is limited. I plan to post a separate article showing my pictures of the P1000 zooming in to the tall buildings in downtown LA. Normandie Avenue is the more prominent street in the center of the image that extends away from the observatory.
50mm (2X magnification): 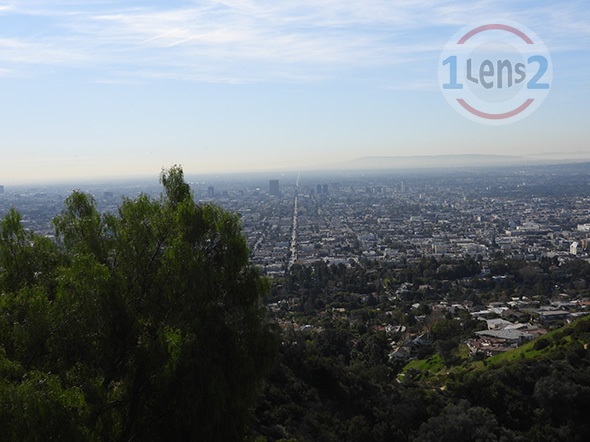 This picture shows that the atmospheric conditions are not the best for long zooming. There's a fair amount of haze and/or smog in the air. Plus, the camera is facing south from the Griffith Observatory and the sun is shining brightly from the southeast, so we are taking pictures into the sun which is backlighting the haze and smog. These atmospheric conditions will affect the sharpness of the pictures. 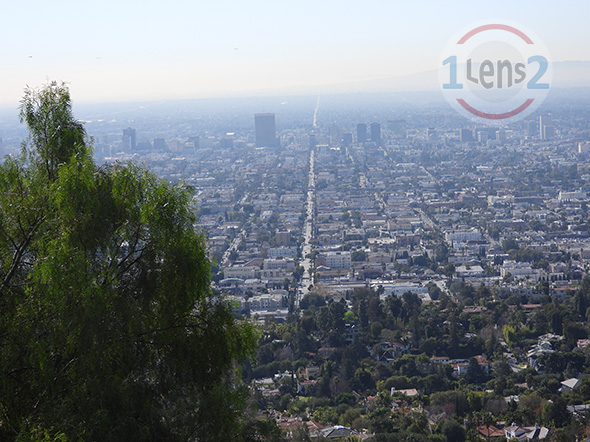 At this relatively low zoom level, the subject of the picture is the overall urbanscape of East Hollywood. The picture also calls out the difference between the streets below Mount Hollywood and the homes on the lower slope of the mountain. Or at least, that's what I see. We've not yet zoomed in far enough so that the subject is Normandie Avenue. 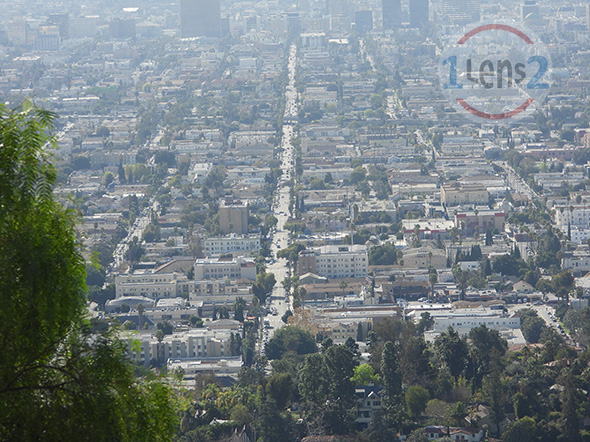 Even at 200mm, street level details are hard to make out. This is a reminder of how far away the Griffith Observatory is from this area. 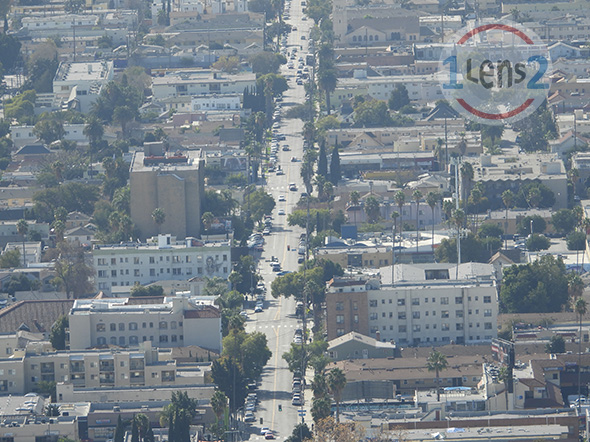 Normandie Avenue is finally the subject of the picture. The Fountain Avenue intersection is just above the middle of the picture. Street level detail is now becoming discernable if you look closely, you can see a couple of people walking on the sidewalks. You can also see that there is a huge mural on the side of the apartment building. 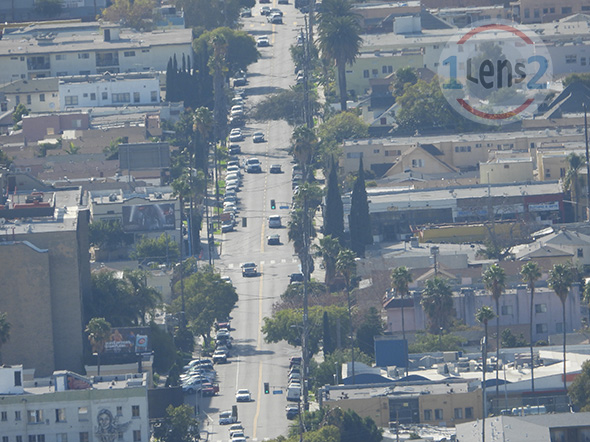 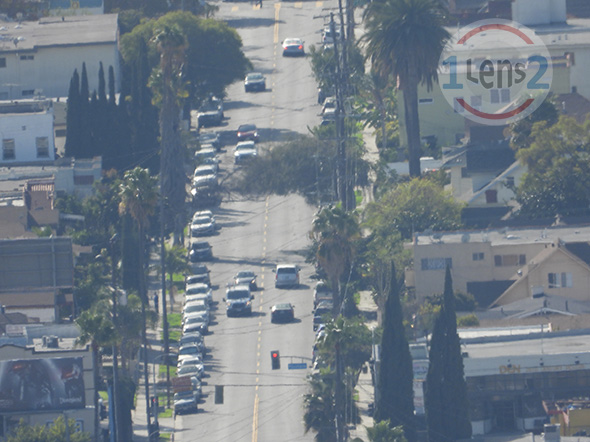 The pictures at 1000mm and 2000mm are definitely in the "Holy Cow - that's close" range! This scene is over a mile and a half away, so you can see the effects of the heat waves and the haze/smog in the atmosphere. 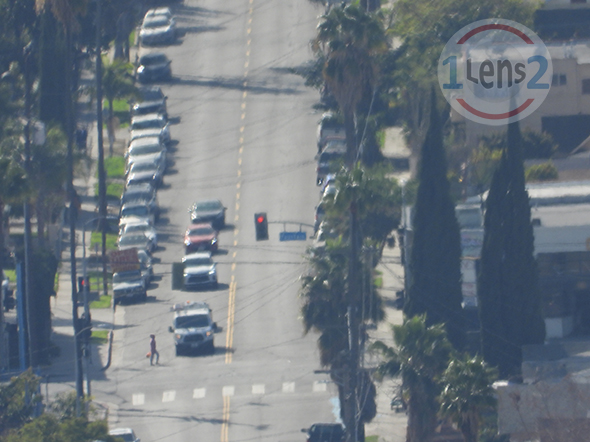 And here we are at the Nikon P1000's maximum zoom of 3000mm (35mm equivalent). We can clearly see a person walking across the street and she is clearly not in the cross walk :)

The largest picture that will fit on this webpage is about 600 pixels wide. Like most cameras, the P1000's pictures are much bigger than that, so I had to scale them down so that they would fit on the page. If we display the pictures at their full size then we'd only be able to see a small portion of them because they would expand beyond the viewable area of the webpage. Here's a 600 pixel wide portion of the full-size picture. 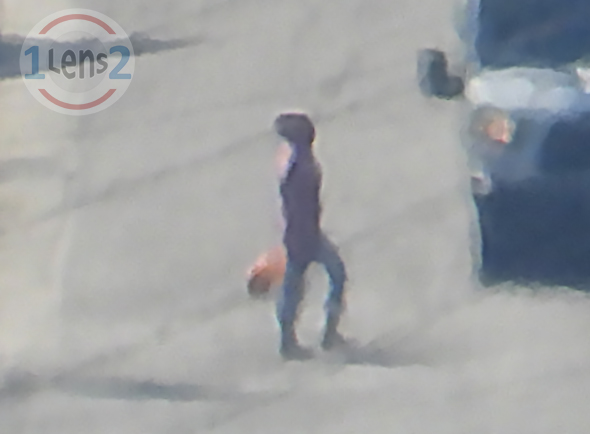 A 600 pixel wide portion of the full-size picture.

This is not a digital zoom. This would be how big the woman would look if you viewed the full-sized picture on a device with the same screen resolution as the image (4608 X 3456 pixels) at a 1:1 ratio. This is the only image in the article that I adjusted in Photoshop. I sharpened it a little.

Take a look at the wide angle and full zoom comparison below. The woman in the 3000mm image does not look very sharp due to the effects of shooting through almost two miles of atmosphere, but the difference in magnification is truly amazing. 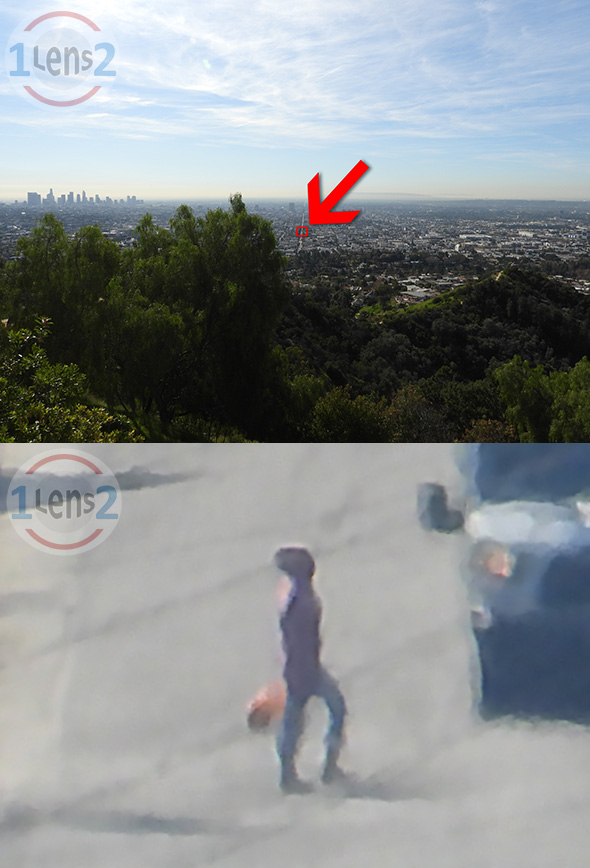 I was at the Griffith Observatory for most of the day so I also had a chance to zoom in on Normandie Avenue just as the sun was going down. Here are the wide angle and fully zoomed pictures for your further viewing enjoyment. 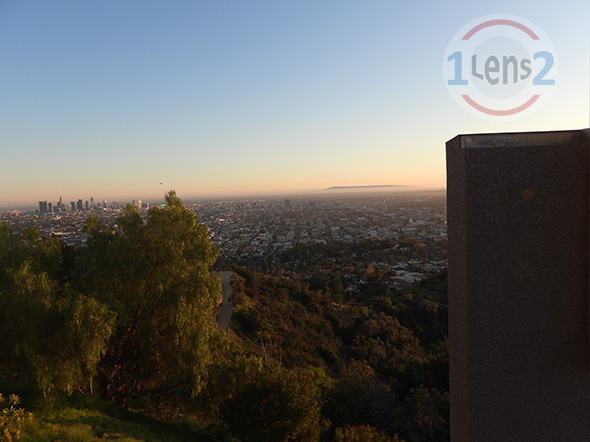 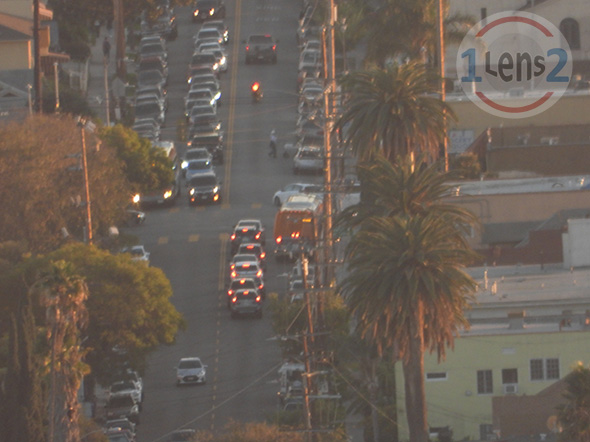 The Griffith Observatory is a great place to view the famous Hollywood Sign too. I posted this article with pictures and video where I used the Nikon COOLPIX P1000 camera to zoom in to see close-up details of the Hollywood sign.

I also recorded video when I was of zooming in and out of the streets of East Hollywood from the Griffith Observatory. Click on the picture below to watch the video on YouTube and to drop in on the observatory from space! If you like the video then please consider hitting the like button on YouTube and subscribing to my YouTube channel. 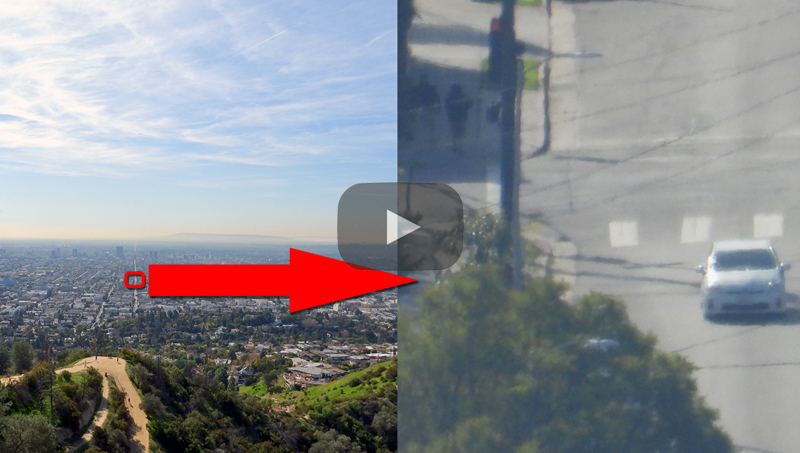